You are here: Home › Macro › What Is The Middle Class?

The term middle class gets thrown around a lot.  It seems that all politicians pay lip service to helping the middle class, but few define what they believe it is.  What is the middle class? Is it based on income, on education, on wealth, or on lifestyle?

What Is The Middle Class By Income:

The most logical definition of middle class would be to define middle class by income.  Thankfully for us our IRS and our census bureau compile all sorts of data, and we can analyze it to our hearts desire. (Wait a minute I just said thankfully the IRS did something…I think I’m gonna be sick ;)) Okay so the IRS and the Census bureau divide household income into 5 quintiles. We could use this data and say well, the middle quintile is in the middle, so that is a great measurement….BUT, that would state that the middle class is 20% of the population, the lower class is 40% and the upper class is 40%.

Alternatively we could use the mid points of the 2nd and 4th quintile as barriers and cut it 30% 40% 30%. This would result in the following brackets.  Overall I think by income this is a good definition of the middle class.

Here’s a data table I found off of census.gov:

Since this chart is showing the mean of each quintile, if we take the numbers from the second and fourth quintile we would have a good definition of the middle class in which 40% of the population counts as middle class. This would be those households having an income of between $40,681 and $103,115 for 2014.  Alternatively we could go a bit further and include the entire 2nd, 3rd, and 4th quintile.  By finding the midpoint between the 2nd and the 1st quintile and the midpoint of the 4th and fifth quintile averages, we should have a good approximation.  For 2014 this would give a range of $28,395 – $160,068.  Personally I think the first range of $40,681 – $103,115 is a better picture of middle class.

An alternative way to calculate what the middle class is by income would be to use it as a percentage of the Federal Poverty level.  This takes household size into account, which I think is important because that will drastically change the standard of living.  A single person living off of $28,395 will have a drastically different lifestyle than a family of 6 living off the same amount.  Perhaps a measurement of 250% – 600% of FPL would be about right.

Unlike the above measurements which reflect the true middle of our society, this measurement essentially encompasses any family that has the ability to make 2 and half times to 6 times the amount of money necessary to escape poverty.  For an average American household size of 2.5 people, we would have a range of $45,025 to $108,060. This matches pretty closely to the $40,681 – $103,115 range we established using the true middle 40% of US households.

What Is The Middle Class By Wealth:

Given this data, what really pops out at me is the differences between mean and median.  In the middle three quintiles, across all age groups the difference between mean and median is rather insignificant. When it comes to the first quintile and the fifth quintile, the differences are stark.  This shows that a small amount of individuals on both sides of the wealth spectrum throw the statistics for everyone else. Median is a much more accurate measure of where most people are at than the average, especially when these numbers have a large difference.

Using this chart, I took the middle quintile and found the likely starting and stopping points of each side to give a range for the entire quintile.  If we look at these ranges we get a good look at the amount of wealth the median household in each age bracket has acquired.  I did this by finding the difference between the next quintile, dividing by 2, and adding in the lower quintile number, to get the midpoint between the two quintiles.  Here are the results: 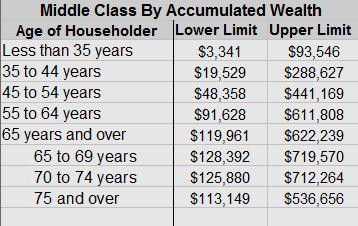 Even though I like the concept of dividing the middle class into age segments by acquired wealth, I have a hard time viewing a household headed by someone with an average age of 40 with only $20,000 in acquired wealth as being middle class. This is actually a real eye opener for me, I thought for sure the median wealth for all of these age brackets would be much higher.  Looks like we have some work to do!

What is the Middle Class By Lifestyle?

Is middle class a lifestyle definition? Is it defined by where you are in life by an accumulation of things?  Is it “Living The American Dream” of a house with 2 cars in the garage and a chicken in every pot?  I ask this because I know people who make $25,000 a year and own their own home and 2 cars, while I also know people who make $300,000 a year who rent and don’t own cars because living in the middle of the city a car is more of a hassle than an advantage.

Is being middle class the ability to save some money? There are people in this world that will always be broke.  Sure, we may say it is easier for someone earning $100K to save money than someone earning $25K, but the vast majority of Americans will make excuses for why they can’t save money and that it is someone else’s fault (usually the president, thanks Obama!) regardless of income level. I have heard the EXACT same line on this from people earning $25,000, $50,000 and over $100,000 a year.  The ability to save money is a mindset, the ability of discipline and self restraint, and the ability to do simple math, so I don’t think this is a good barometer of what the middle class is.

Am I Middle Class?

So the question I need to answer is where do I fit in?  As far as income is concerned I fit right into the third quintile with an income of around $72,000.  If we go by household size as a percent of FPL we would actually be under the 250% of FPL mark, which is $81,425. When looking at acquired wealth by age group we are well above middle class, with over $180,000 in total net worth this puts us in the highest quintile for households where the primary earner is under age 35.

So what do you think middle class is?  Do you define it by income, accumulated wealth, or some other measure?