You are here: Home › Savvy Consumer › LED Light Bulbs At The Dollar Store

I’m a big fan of LED light bulbs.  They provide just as much light as an incandescent bulb, but use about 15% of the energy of an incandescent and last 10 times as long.  The quality of light is also much better than CFLs and they are instantly bright when turned on, unlike CFLs.

This weekend I was out shopping and low and behold I found LED light bulbs at the dollar store. They had this giant display of 40 watt and 60 watt LED light bulbs.   On the display is a tag stating that they are available at this low price thanks to a partnership from American Electric Power and Efficiency United.  It’s great that the local utilies are helping to drive the costs of these bulbs down to help more people adopt LED lighting, which will in turn drive up the scale of production to make LED bulbs cheaper.  I personally switched over to LED bulbs at the start of 2014 thanks to heavily discounted bulbs through the same program, and I have been saving around $20 a month, every month for the past 2 years, not bad for a $50 investment.  That savings is with the majority of my bulbs being CFLs already.  For someone switching from incandescent bulbs to LED the savings could easily add up to over $50 a month. 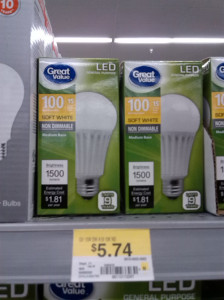 These prices are most likely isolated the southwest Michigan, where Indiana Michigan Power and Efficiency United operate.  I’m sure there are other utilties across the country subsidizing the costs of these bulbs as well, so keep your eyes open.  The typical market price for 60 watt LED bulbs seems to be around $3 a bulb right now.  The best deals for everyone outside of southwest Michigan are through Amazon.  Right now you can get a 12 pack of 60 watt phillips bulbs for only $28.99 ($2.42 each)

If your house has 50 light bulbs and you replace all of them with LEDs it is probable that you will save somewhere between $20 a month and $50 a month depending on what light bulbs you currently have installed and how long you leave them on for.  This is $240 – $600 a year, EVERY year, for the next 10 – 20 years, once again depending on usage.  A $50 investment in light bulbs today can give you this return.  Do you know of any other investments that pay for themselves in 1 – 3 months?

Have you found LED light bulbs at the dollar store or anywhere else unexpected?

2 Responses to "LED Light Bulbs At The Dollar Store"