You are here: Home › Saving › Joe Biden Thinks I Live In Poverty 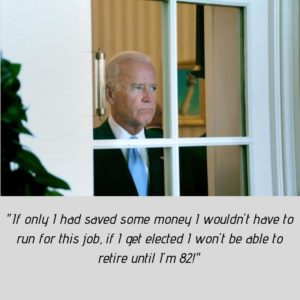 Joe Biden recently commented that almost half of Americans are living in Poverty.  The data that was being quoted included those the government says are living below the poverty line based on Adjusted Gross Income (AGI) and those who are low income living on up to 200% of the Federal Poverty Line by AGI. This includes 43.5% of the U.S. population.  Last year Mrs. C. and I were at 199% of the poverty level based on AGI for a family of 6.  Joe Biden is looking out for me, because apparently I could fall into economic distress at any moment.

Despite the fact that Mrs. C. and I have built over 300K in wealth, own 4 houses, have a 40% savings rate, and keep 6 months of cash as an emergency fund, we are lumped in as living in poverty to Joe Biden. To me this is a bit comical because we have a higher net worth than Joe Biden. I understand that our family is an outlier because we are seeking Financial Independence, whereas the majority of people with an AGI at 199% are not in the financial position we are.

We are also only at 199% of AGI because the Obamacare law that Joe Biden was instrumental in getting passed is a sweet spot in the legislation.  If AGI is <200% and you estimate your income low the most you have to pay back is $600 for a family plan.  This is also a sweet spot for the silver plan cost sharing subsidies which greatly lower the deductible on insurance.  We choose to put a lot of money into tax deferred accounts to hit this mark, otherwise we would be much closer to 250% of the federal poverty level.

Joe Biden Is A High Earner Low Net Worth Individual

Joe Biden has been a US Senator or VP for over a decade longer than I have been alive.  Before that he was a lawyer. He also has royalty income from book deals.

This guy has “high income” written all over him. His wife is also a high earner as a college professor and author.  A Senator earns $174,000 a year and the vice president earns $230,000 a year.  In 2013 Joe and his wife claimed $407,000 in income. Joe receives a pension from being a Senator and receives Social Security benefits.   Despite having a high income, in 2008 when running for Vice President of the United States at the age of 65 Joe claimed in his financial disclosures a total net worth of roughly $24,500. That is not a typo.  To be fair it appears he was purposefully disguising his wealth by having several investments that were worth between $1,000 and $15,000 which is the largest percentage range there is on the disclosure form.  For someone to have been a Senator for 3 decades and have a net worth of only $25K is absurd.

Surely over the past decade Joe Biden has done better right?

In contrast, I work half the year as a contractor and wear a hardhat and work boots to work each day.  My wife works super part time as a merchandiser at an auto parts store.  Come on Joe you can do better! It will be interesting to see what his disclosure form states when he releases a new one for this presidential run.  Maybe Joe has turned things around, but from the looks of it, we need to be worried about Joe more than he is worried about us.

I’m not trying to attack Joe, but isn’t it crazy that someone with his income level is doing so poorly on net worth?  He and his wife earn $400,000+ a year! This is craziness. The guy holds having a low net worth as some kind of a badge of honor for not being a wealthy Republican and being able to relate to the common man.  The guy made 6 figures most of his life!  If he had saved and invested 10% of his pay for the last 30 years he would be a multimillionaire.  Joe Biden has actively decided not to build wealth.  It wasn’t a lack of earnings, $400,000 a year is about 7 times what the average family earns.  His lack of wealth is overspending and a lack of fiscal discipline.

FPL Does Not Measure Wealth:

Yes we have many people in this country who are truly living in poverty.  There are people who don’t know where their next meal will come from, but it is absolutely no where near 50% of the population.  A family of 4 is at 200% of the Federal Poverty Level with an income of $50,200.  This family may struggle to save for college and retirement, but outside of San Francisco and New York City is not likely to be at risk of missing any meals. The Federal Poverty level is also assigned on Adjusted Gross Income, so this is after people have had 401K and other retirement contributions removed. Of course income also has nothing to do with wealth.  There are thousands and thousands of millionaires who live off of less than 200% of the federal poverty level.  Yes it is far more likely that someone living off under 200% of the FPL is struggling than a millionaire next door, but it certainly doesn’t mean that they are living in poverty.

Poverty Is Not A Magical Number:

Absolute Poverty by definition means lacking the ability to provide for essentials such as food, water, clothing, and shelter. The word poverty in western culture and America in general has come to mean anyone who can’t afford a lavish lifestyle.  There are millions of people who are counted in the statistics Joe Biden is using who have 2 vehicles, a full fridge, a closet full of clothes, and safe housing. This is certainly true of those living between 100% of FPL and 200% of FPL, but still there are many living below 100% of FPL who have these basic needs met, either through frugal living, assistance from family and community, and/or through existing safety net programs.  We as a country do need to address poverty in our communities and work towards eliminating it, but we must start by properly defining it.  It is much easier to help the truly needy 10% of the population than it is to try to help 43.5% of the population.

What do you think of Joe Biden’s comments and of his net worth?  Do you think that half the population is living in poverty?

Update: According to a recently released article, Joe Biden since leaving the White House has been giving dozens of paid speeches, with earnings of up to $200,000 per speech.  Hopefully these engagements have turned his net worth around.

7 Responses to "Joe Biden Thinks I Live In Poverty"