You are here: Home › Home Ownership › We Completed Our 5th Rental House!

While working on rental house #4 we were continuing to look for the next investment. We had made offers on 3 other houses that we didn’t get.  On one of them we were only outbid by $1,000!  We had passed over this house previously because it was a 3 bedroom not a 4 bedroom and had a well, and I am really wanting to get away from wells.  This house had been on the market for a while and the seller had just went through and repainted most of the house and relisted it.  The house was listed at $39,900 and we ultimately bought it for $35,000 flat.

We originally offered $32,000 for the house and the sellers agent mentioned there was another interested party and that $35,000 would probably make a deal.  Although I hate paying more for a house I was also getting sick of losing bids, so we upped our offer.  We made an all cash offer with the only contingency being that we test the well and the furnace.  We closed on the house in under a week! 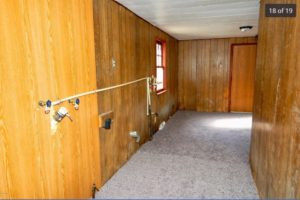 This house is a 3 bedroom 1 bath house with decent sized rooms.  The big plus is that off of the kitchen there was an additional family room that had the potential to turn into a 4th bedroom.  An extra bedroom brings an extra $100 to $150 in rent, so I saw this as a major value add opportunity.  The house had recently been reshingled, although they did not do a tear off and just put the new shingles over the old. This house is in much better shape than the last few we have done. 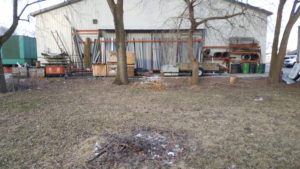 The trees on the side of the house were growing into it and needed significant work to get them away from the house.

The house backs up to an electrical supply company.  This company also owns the lot next to the house and they have a couple storage trailers on this lot. Although it isn’t the prettiest thing to share a property line with I think it’s still better than other houses.  No one is there on nights and weekends, that sort of thing. I personally like having a buffer between neighbors.

The bonus room had obviously had water damage at some point, but had new carpet. 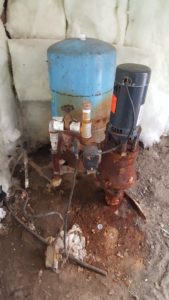 The well pump was very old and covered in rust. Since the well wasn’t on when we looked at the house we made verifying that it worked a condition of our offer. The well is housed outside in a metal shed.  The previous owner had covered the walls with insulation and the floor is obviously dirt.  This is the first house we have bought with the well pump outside.  In this situation it makes sense because this house does not have a basement. 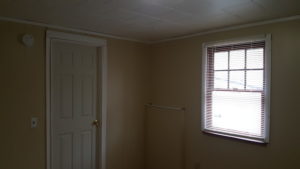 Created A Fourth Bedroom:Originally there was a wide hallway off of the kitchen that lead to a family room.  The hookups for the washer and dryer were in this hallway.  This was the big project.  We ripped out all of the old paneling to replace it.  We removed the new carpet that was laid down and found that the subfloor was bad so we replaced that as well.  We put in new paneling, painted it and replaced the carpet.  There had previously been a spot for a water softener, but we took that plumbing out and built a small box around it to have an interior shutoff for the water for the house.  We then built a wall and installed a door to turn this room into a bedroom separating the laundry area and this bedroom.  We also framed in the water heater that was in this room and closed it off with a large access panel. Even with the new subfloor and paneling we spent under $500 building this room. This also provided separation for the laundry area which is in between this room and the kitchen. 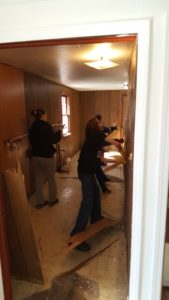 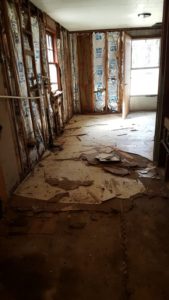 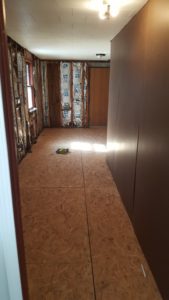 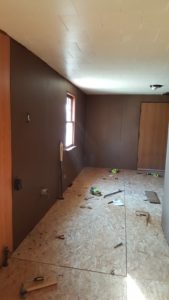 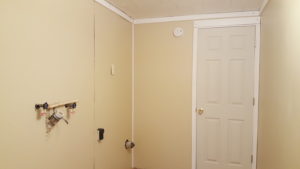 Troubleshoot Electrical Issues: We had a few outlets and an overhead light that didn’t function.  It turns out that all of these issues were traced back to bad GFCIs, that didn’t need to be there to begin with.  I swapped out 2 GFCIs and replaced 2 light switches.  Total cost was only a few dollars. 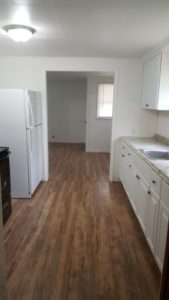 We provide a fridge and a stove in all our rentals.  We bought the fridge on a scratch and dent sale for just under $300 and paid around $400 for the stove. We got both of these new from Lowes.  This house has big doors so it was really nice to not have to take off handles or doors to get the appliances in. At some point we may add in a small ramp to the front door.  between the wide doors and slab construction, this house is well suited for handicap accessibility.

Tree Work: I spent the better part of 2 days trimming back the trees from the house.  It looks a lot better now. All the branches had to be loaded  up in my van and taken back to our house to burn. This was all labor so there was no direct cost to this work. I did some of this work from a ladder and some from the roof.

Replace  Damaged Window: This did not go well.  There was one window pane that was broken so I decided I would replace it with plexiglass.  While trying to open the window I broke the other pane, doh!.  So now I needed to replace 2 window panes.  I went to Lowes, but they were out of the size I needed so I went to Home Depot.  They had the proper size but they don’t cut Plexiglass there.  I watched a Youtube video and figured I could cut it, I was wrong.  I kept veering off the line as I cut it.  So I went back to Lowes, paid for an over sized sheet and had them cut it to the correct size.

Then when I was installing the new panes I had to use my socket set to take down the storm window.  I left it outside while I went to work on something else and it got stolen! I guess if losing a $100 tool set is the worst property crime I have across rehabbing 5 properties in an economically depressed city with a high crime rate then I should consider myself lucky.  Anyways I got the windows installed! I spent around $100 replacing this plexiglass, about 3 times what I should have spent. 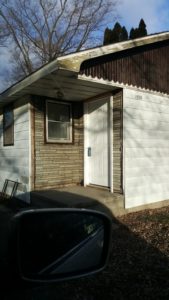 I had to travel for some training for work and Mrs. C. took on this task,  Siding is really inexpensive and it makes a big difference in how the house looks. It was only a small area that needed to be done and she did a great job. She spent under $150 on this, including buying some new tools.

What you see in this picture is what was there to begin with.  Mrs. C. covered up the fake brick siding with white vinyl siding that matches the rest of the house much better.

Well Pump and Tank Replacement: When I verified the well I went to the house ran water in all the faucets for a good 5 minutes and decided it was good. What I failed to do was go into the pump house and watch the pump while it was going.  After we closed on the house the water pressure dropped on us and I went to look in the pump house and it looks like the pump busted a seal, it was spraying water everywhere.  The pump was probably 30+ years old, so we decided to replace it now rather than have a problem down the road.  A new well pump, tank and plumbing came up to around $2,700.

Replaced Furnace Blower Motor: The furnace blower motor made a ton of noise.  We paid to have this replaced.  We have a good HVAC company that we use.  This was just under $500.  I’m glad we didn’t have to replace the furnace.

Overall we spent around $5,000 on this rehab and completed it in under 3 weeks! This is the timeline I want to be on for rehabs.  This project was much easier to see the end of the tunnel on then our last one that we had for 3 months before it was rent ready.

Of course we listed this house right as the Corona virus was taking hold of the US.  just a few days into the listing our state was put on a lock down.  Who wants to move in the middle of a state lock down, a pandemic, and with massive job losses going on? We had much less interest than on our last house, but Mrs. C. was still able to find a qualified tenant.  We had 2 qualified parties decide to pass on the house and the 3rd qualified party was excited to close on the place.  They closed on the lease exactly 1 month after we bought the house for $1,000 a month. We had a tenant in place sooner than when we would have had our first mortgage payment had we gotten a loan.

This house is crazy over assessed and it looks like the Corona virus delayed the townships board of review meetings.  They have this house listed as being worth over twice what I have into it.  It’s actually listed at an even higher tax assessment than the house next door that has twice the square footage.  I sent in a letter of appeal with details about what I paid for it, what work we’ve done and what comparable sales have been.  Hopefully they will reassess it and drop the taxes down to reality.

After subtracting our costs for the mortgage payment, property taxes, insurance, and maintenance we should still cash flow around $500 a month on this house. $500 a month is $6,000 a year.  To get that much money out of a retirement account using the 4% withdrawal rate you would need $150,000 invested.  We will effectively have $0 invested in this house once we complete our refinance.  Even if the house were paid off in full and we were not using any leverage, at $40,000 all in this is a 15% return, still a lot better than the 4% withdrawal rate.  I’m certainly not advocating to skip retirement account mutual fund investing altogether,  I just want to highlight that there are other options and it is good to have a mix of investments.

For anyone interesting in investing in low cost rental homes I recommend checking out the book Investing in Rental Properties for Beginners: Buy Low, Rent High

which focuses on purchasing sub 30K in areas very similar to where I am investing. 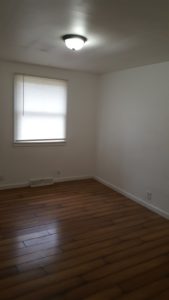 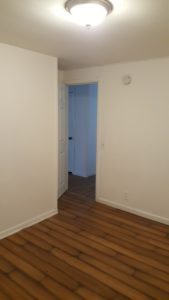 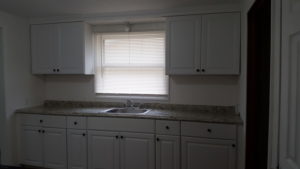 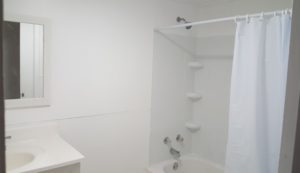 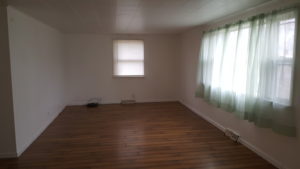 What do you think of this house?  Are any readers investing in real estate right now?

2 Responses to "We Completed Our 5th Rental House!"