I really wanted to get a rental house when my fall outage season finished up so I could do a rehab while the kids were in school.  Because of this desire I overpaid, but that’s OK, the numbers still work.  I bought a 2 bedroom 1 bath home with a 1 car garage for $24,000.  The house was listed at $27,900 and we put an offer in 3 days after it was listed.

We were in a good position to buy because we refinanced rental house #1 and paid off our Heloc in September. I was scheduled to finish working at my seasonal nuclear contracting job in early November and would be off work for about 3 months, perfect for a rehab. This house will be the first house that we fully complete the BRRRR method on. BRRRR stands for Buy, Rehab, Rent, Refinance, Repeat. The goal is to buy the house well below market value, rehab it to add substantial value, rent it out to generate cash flow, then refinance.  When refinancing the rehab and the rental income should allow the property to appraise high enough to get your entire investment, and sometimes more, back at the closing.  Then you repeat because all of your cash you put into the deal has come back to you. 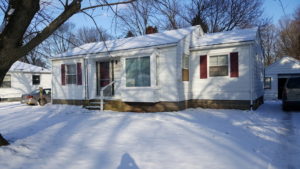 This house is just under 1000 square feet. It’s a 2 bedroom 1 bath with a detached 1 car garage.  The basement is partially finished, with roughly 2/3 of the basement being finished with a concrete floor. It sits on a typical city lot in a decent neighborhood.  It’s on a side street so there is minimal traffic.

The Good: The semi-finished basement gives a great value-add opportunity to add a 3rd bedroom.  The garage is highly desirable and a lot of rental houses in this city do not have a garage.  The house has hardwood floors throughout. 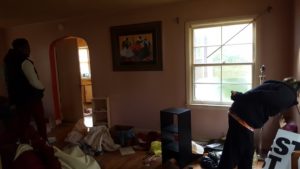 The Bad: This house was a bank repo and the former owners left a ton of trash in the house.  The house was smoked in heavily. The walls, the ceiling and the floor were embedded with smoke residue. I was actually surprised that the bank that owned the home didn’t pay a company to at least remove the trash to make the house look a bit more appealing.

The Ugly:  The big problem was mold.  The finished basement had significant mold on the bottom 2 feet of the walls, with surface mold going the rest of the way up.  The house smelled horrible.  This was certainly the main concern we had with going after this property.  Although I knew it would be a lot of work, I also knew that it would be a great opportunity because the mold would scare off a lot of other buyers.

Finding the House and The Showing:

I look at Facebook, Craigslist, and the MLS every day.  When this house popped up on the market I wanted to see it right away.  Mrs. C. contacted the listing agent within a couple hours of the house being listed and received no response.  She gave him 24 hours, then went with a Realtor that a friend referred us to who showed it to us the next day.

Making An Offer: The house was listed at $27,900.  I originally offered $20,000 for the house.  I thought this was in the low ball territory, especially since it was just listed, but due to a substantial mold issue in the basement I wanted to come in low.  I don’t think the bank was even aware of this issue.  We offered an all cash, no contingency 7 day close.  Unfortunate the bank received another offer and asked us to come in with our highest and best offer.  We ran our numbers again and were comfortable with a $24,000 bid. In retrospect I think we should have held at our $20,000 bid, I think with our terms we had a really good chance of winning at the lower price. The bank accepted our offer.  This is interesting to me because I have read a lot about REO properties and the process by which price reductions occur. It seemed like until the first official price reduction getting a discount of more than 10% was not possible.  We paid 86% of list price, which puts a dent in this theory.

This was by far the quickest closing I have ever been a part of.  This house was a bank repossession and the bank was highly motivated to close before the end of the month.  We closed on October 31st, just 6 days after the bank accepted our offer. I underestimated the motivation that banks have to close the books, especially to hit an end of reporting deadline.  I will certainly use this to my advantage in future negotiations. We did the closing at the Realtors office.  Our closing costs were $580 when factoring out property tax credits. 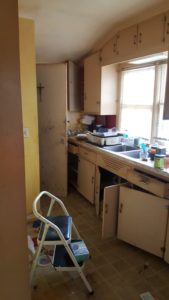 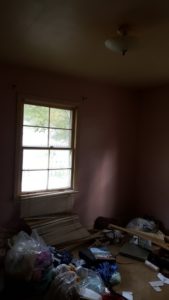 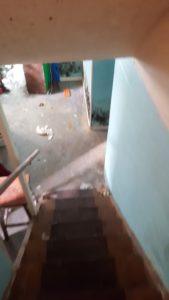 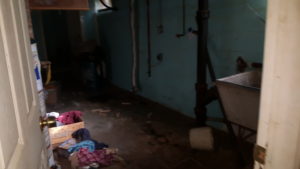 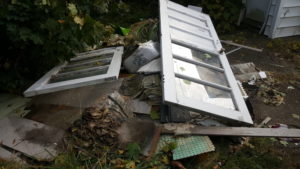 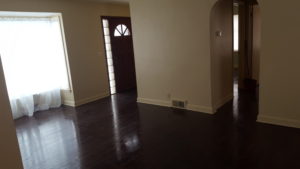 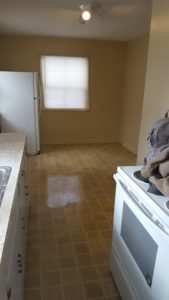 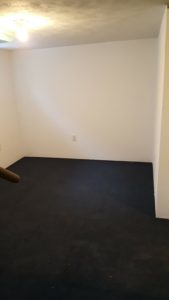 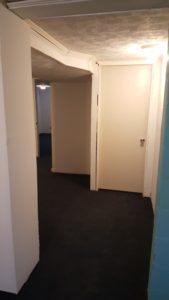 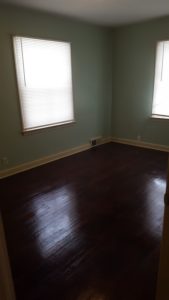 The tax bill for the property was for the time period ended on October 31st, since we closed on October 31st we should have received a credit for the full cost of the tax bill.  This would have been correct, except that there was a past due water / sewer / trash bill tacked onto the property taxes for a cost of roughly $1,300.  I contacted the closing company and they sent a bill to the bank that sold me the house.  Thankfully the bank was willing to pay for this and sent a check to the township 3 weeks later.  Going forward I should include stopping by the township office and asking about any past due balances going onto the tax bills before executing a purchase.

Carrying Costs: With carrying the house for 4 months we did have expenses for utilities and interest on the heloc.  I haven’t received the final bills yet but we are trending at $860 total in carrying costs.  Adding in the prorated property taxes would put us at right around $1,000. Adding this into our rehab costs puts us at $33,000 total cost.

Taxes: This house is stupid over-assessed.  I’ve honestly never seen anything like it.  The house was assessed at being worth $76,000.  I have a form set up to protest this and should get it dropped down substantially. I’ve been successful with getting my property taxes lowered several times so far.

We listed the house for rent as a 3 bedroom at $900 a month to see if we could get any takers. We list the house on Cozy.co which also syndicates to Realtor.com.  We post on the Facebook marketplace, craigslist, and our own website.  We also put a custom sign up in the yard. I was apprehensive since this is not the busy time of year for moving.  Most landlords in this area try to avoid listing in the winter months.

Before we even listed the house we had three interested parties.  Two had stopped by the house while we were rehabbing and gave us their information and another had looked at our last rental and called us to see if we had anything coming on the market soon.  We had 10 people interested right after listing it and several of those were well qualified.

We signed a 12 month lease for $900 a month within a week of listing it.  This level of interest was very encouraging to what we are doing.  I’m excited to work on the next one, since this one will generate a lot of cash flow at $900 a month.  We should also be able to raise rents in the future.  Our cap rate on this property is 28%.  When factoring in interest payments it is 23%.  In 4 years this house will effectively pay for itself. In addition to us making a good profit off of this house, we also are providing housing for a family that was struggling to find a house to rent.  The parents have 5 kids and although it is illegal to discriminate based on family size, it still happens.  Their current apartment had recently increased their rental rate substantially and the apartment complex had seen a rash of violence over the past year with multiple murders. They exceeded our income requirements and were ready to move ASAP.  some of the interested parties in the house needed to wait until mid March or April to execute a lease because they were waiting for tax refunds.

We spent a total of 14 weeks on this project.  This was longer than what a normal rehab will be for us because of several factors.  We had Thanksgiving and Christmas in the mix, a tenant who broke her lease on another property and caused damages that needed over a week to repair and rerent, and Mrs. C. had 2 surgeries. All of these items combined took about 7 weeks away from work on this project.  In General a 6 week timeline should be adequate for most of our rehabs going forward, especially since most houses won’t have a finished basement that needs fully redone.

I keep my fingers on the pulse of rental prices in my area.  I take detailed notes on virtually every property that comes up for rent so that I have a clear idea of where I should list my properties.  In my area there is one large property management company that lists their houses at very low amounts.  I’m sure this allows them to choose from dozens of applicants, but it also greatly cuts cash flow to their clients.  They told a friend of ours who was looking into having a 3 bedroom managed by them that they only rent 3 bedroom houses for $650 a month.

This is especially interesting when you consider HOW property management companies are paid.  They are typically paid a flat fee of 10% for managing a rental property.  To them renting a house at $650 instead of $900 only drops their yearly income by $300, but they are costing their clients $3,000!  Another reason to self manage.  This management company has over 300 houses under management, with several home owners who have dozens of properties.  Can you imagine having 20 properties that were each rented at $250 too low?  That’s $5,000 a month, every month of cash burned.

A friend of mine 20 minutes up the road listed his 3 bedroom house for $700 a month and had over 100 people contact him within a couple hours.  He should have listed it at $1,000 a month.  He had the headache of dealing with 100s of applicants and cut himself $3,600 a year in profit.  You can ALWAYS drop the price.  It makes sense to test the market to see if you can get a higher rate.  It is NOT ripping people off or taking advantage or renters to seek a higher rate.  You are providing an alternative to their current situation and the higher rate you are charging may still be a better deal that what several other people have right now.  Just because another landlord has a lower price doesn’t mean you’re house isn’t worth more.  They can be short changing themselves, either on purpose like the property management company, or by accident like my friend.

What do you think about this house? Are you investing in rental real estate, why or why not?

2 Responses to "We Finished Rental House #4! Our First True BRRRR"