You are here: Home › Investing › Why You Don’t Need $1 Million To Retire 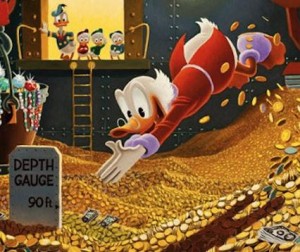 It seems that many advisers are questioning if $1 million is enough money for a comfortable retirement.  At the same time, they keep selling the “necessity” of having 75-85% of your current income to retire.  I think that both of these notions are incorrect for most people. For someone earning $100,000 a year, to replace 85% of his income in retirement at a 4% withdrawal rate would require $2.12 million, While a household earning $51,000, the national median, would need  $1.27 million

First of all, $1 million will allow for a $40,000 withdrawal per year at 4%.  Now, that isn’t to say that $40,000 a year is a ton of money, but it is a decent income to live off of, especially when you factor in expenses that will no longer exist in retirement:

You are no longer saving for retirement: 15%+ of income

You are no longer paying income taxes: 20%+ of income

You are no longer paying a mortgage : 15%+ of income

In this scenario over 50% of pre-retirement expenses are eliminated.  Also, don’t forget about Social Security.  The current average Social Security payment is $1,250 a month, for a couple, that’s $30,000 a year.

Now is $70,000 a year necessary to live on in retirement?  I certainly don’t think so.  A decent middle class standard of living could be had for under half of that, especially with a paid off home.

Another option that is rarely considered is working in retirement.  This is largely due to the “old definition” of retirement.  Work one job, for one employer for 40 years and they take care of you for the the last few years of your life with a modest pension.  The concept of work and retirement has greatly shifted.  I personally view the “new retirement” as simply having enough financial security to have options.  For instance during the wealth building, child raising, home building stage of my life, I have to work, and earn a certain amount to cover all of these expenses.  But when my house is paid for, children are grown, and I have a large amount of money in savings, I can get by earning a lot less.  I plan, regardless of my personal savings to do some work in retirement.  It will most likely be short term temporary jobs, but  even $10,000 a year of earned income drastically changes the math on how much one needs to save.

These figures on how much is needed for retirement make many assumptions, and are largely put out by investment companies that stand to make more money if the masses feel they need to invest and save millions in order to retire.  There is a MAJOR disconnect between these numbers and what people nearing retirement have saved,  with those age 55 to 64 possessing an average balance of $165,200 in retirement accounts.   While this is most likely not enough money to retire comfortably on, a million is most likely overkill.  Finding the right balance is all it takes.