You are here: Home › Home Ownership › When Preparation Meets Opportunity

Last year I wrote about Luck, and how all of us are extremely lucky based on the time and place we live in and the modern conveniences that we have.  I strongly believe that the true definition of luck is when preparation meets opportunity.  For the most part we make our own luck.  Last month I had hit this intersection of preparation and opportunity when both aligned together to achieve a goal I have had since my family moved to Sodus in 2011.

We have 3 acres of land that back up to an abandoned railroad bed that is in a wooded area.  We have no neighbors on that side, which goes down a ravine and after the woods is nothing but farmland.  My long term goal was to at some point own that property.  I had researched who owned it, but since the same people had owned it for 30 years, since the railroad sold it, I figured I would have a slim chance of acquiring it.

The part of the railroad bed I wanted is 4.5 acres and stretches almost 2,750 feet.  It runs behind our subdivision and continues several hundred feet to the North and South of it.  It has a decent chunk of a small stream on it, which greatly increases the amount of it that we would have access to.  It is an amazingly beautiful piece of property, and it has very little utility for someone who doesn’t have adjoining property.

A little over a month ago my wife brought in the mail and there was this letter stating that the railroad bed was for sale. I immediately called him to figure out what he wanted for it.  There are actually 2 chucks in question and I only wanted the first chunk.  He was asking only $6,000 for them together. Mrs. C. and I discussed it and we offered $3,000 for the first chunk.  He countered the next day with $3,500 and we closed a week later.  For $3,500 I expanded our yard from 3 acres to 7.5 acres. 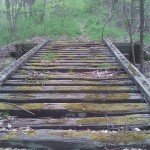 Behind the railroad bed is a 14 acres chunk of woods, that is rarely used by its current owner.  At some point this property may come up for sale, and since it is landlocked only 3 property owners will be adjacent to it, one of them will be myself. The other two are large farms which I can’t see having any real use for ravines with trees on it. This land is in no way farmable.

Currently we have a 6 month emergency fund, and although this is not an emergency, It is worth dipping into the fund to finance this property.  The emergency fund will be completely replenished in under a month when we receive our tax refund.  I also have an upcoming project which will greatly increase our cash reserves.

We were prepared by knowing about the property in advance, knowing what we would be willing to pay for it, and having liquid cash on hand. Because of this we were able to move quickly and secure a deal faster than any of the other 8 houses that adjoin the property could do (if they were even so inclined).  The opportunity presented itself and we were able to take action.  This is what it’s all about.  Putting yourself in the position to take action on the things you WANT because you already took action on the things you have to do to shore up finances.  If I am blessed with a normal lifespan I will get another 50 to 60 years of use out of this property and when my children sell the the house after Mrs. C. and I are gone, it will be worth quite a bit more thanks to the extra property. We also set ourselves up for another “lucky” moment by securing the land next to the big chunk.

When have you experienced a “lucky” moment? Did it also happen thanks to the intersection of preparation and opportunity?

Update 5/31/16: We ended up buying the other chunk of railroad bed adjoining this one.  We now have 1.1 miles of trail, complete with 5 bridges and access to a large creek.

2 Responses to "When Preparation Meets Opportunity"