You are here: Home › Misc. › John C’s Resume of Failure

J$ over at Budgets Are Sexy laid down the gauntlet to publish a resume of failures to balance out the record in terms of success.  Naturally we tend to advertise our successes much much more than our failures, it’s just human nature. Our failures get buried in the backyard and successes are on display in the front yard.  Last year I published Stupid Stuff I Have Done With Money with a similar goal.  I thought I would expand on that list with a few more good failures I have had, and perhaps highlight a few I already mentioned. 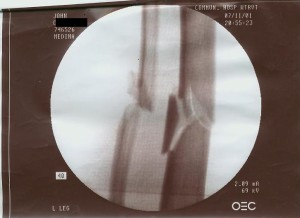 2001: I got hit by a car while rollerblading from my friend’s house home. It was only a ¼ mile if that. I needed to cross the “main drag” in our tiny town. I had looked left it was clear, I looked right, waited for a car to pass then went, without looking left again. I was almost past the car when it hit me. Both bones in my lower left leg were broken and my leg was bent at the break location, like I had another joint, with the bone sticking out. It’s strange because I had typically skated over 50 miles per week, many times at night and always with my headphones on. This time, no headphones, broad daylight, and less than a ¼ mile. I could see my house from the spot on the side of the road I was lying on.

2002: I had been running sub 5 minute miles and training aggressively to get ready for track season my Junior year. I then rolled my ankle causing it to swell to twice its size while walking into our first day of track practice. I tried to act like nothing happened and just ran on it. I did OK and was still relatively competitive at first, but that stress on my ankle caused other issues and I damaged my knee as well during the season. Due to this I wasn’t able to complete the season.

2003/2004: My first real web project where I self hosted and paid for a domain, aptly named “A Daily Dose of John C.”, with my published real name ended up getting me in some trouble. On one section of the page I had reviews of my high school teachers and a basic syllabus for what you had to do to pass their classes. I ended up riling a few feathers, causing multiple meetings with the principal and causing 1 teacher to not allow me to take her class the next semester. I also did a bit too much oversharing on that blog (I know, coming from a guy who details his investments every quarter, yeah it was that bad.) I bought the domain name back a couple years ago so that I can keep it off the Wayback machine.

2006: Sold the stock in my Roth IRAs to help with the down payment on my first house. It was only about $3,000, but included over $1,000 in Hansen Natural stock, which became Monster energy

2007: When Mrs. C. and I bought our first house we knew the detached garage needed the roof replaced, like immediately. When it rained it rained in the garage. I decided to replace the garage roof and replaced all the sheeting and reshingled. This was the first roof I did and I made some mistakes (I was 21 at the time). To this date no water has gotten into the garage so I did OK, but…I didn’t extend the shingle past the fascia, which has led to it rotting and causing damage.

Also while working on this roof in order to spend less money I borrowed my Dad’s ladder. He had a Little Giant Ladder

. While tearing out the sheeting I threw one of the boards down which broke a rung on the ladder. The replacement cost for a Little Giant Ladder section was around $80. I could have bought a pretty good ladder for that. D’oh!

2008: Bought a house at the tax auction with cash (only $6,000 I can’t lose!), i didn’t have enough money to fix it up and ended up selling for a loss 2 years later. Sold for $6,000 after putting several thousand dollars into it and tons of time. That $6,000 sale price after paying closing costs, realtor fees, and lawyer fees due to a title issue I walked away with like $1,800 from the closing table.

2011: Bought a house before selling my current home. Thought it would sell quickly…I still own it.

2013: I built our kids a treehouse in the only tree that was in view of the kitchen window (per Mrs. C. request) I put in a lot of screws and bolts to ensure the tree would properly support the treehouse. We were also in the middle of a historic drought. The next year the tree wan’t as full as it had been when it bloomed. The year after that only a few small branches and shoots from the bottom of the tree bloomed, and the year after that it was fully dead. I killed the tree :(.

2013ish: I needed a replacement car and didn’t want to spend much money. Mrs. C. and I looked at about a half dozen cars in the roughly $1,000 range and nothing was really as it was advertised. We pulled the trigger on this amazing civic hatchback from the early 90s. It was really cheap and got amazing mileage. It needed new tires, but for $500 was a heck of a deal…until we went to put on the spare tire and realized the underside was so damn rusted you literally could not jack it up. Ended up selling it for about what we paid for it without ever driving it except to bring it home.

2012/2013: I Rented a house out to a guy without doing due diligence or requiring income proof. I was also an extremely passive landlord. I found out several months into the lease that he had rented out every bedroom in the house to 5 different people, charging them dirt cheap rent (like 20 bucks a week). We found out because the cops were called due to a fight.

2015: I have a line of large 80′ – 100′ pine trees in my yard. I had previously cut down and processed 2 of them and I was now onto the third one. While cutting the tree my saw got pinched and I destroyed my bar getting it out. After replacing the bar and chain I finished notching the tree and it started to fall…the wrong way, very narrowly missing taking out our treehouse.

2013 – 2017: I’ve written just shy of 300 articles for Action Economics. Those are just the ones that have been published. I’ve deleted over 50 articles that were very close to complete, or were complete for various reasons. Also, of those 300 articles, the top 30 provide roughly 90% of the search engine traffic to this site, which seems extremely lopsided, meaning roughly 270 articles are relative failures.

On the money front I didn’t start this blog to make money, however as time has gone on, money has certainly become a motivating factor. I do put a lot of effort into this blog and making a few bucks is certainly helpful. I currently earn around $200 per month from this site, which is WAY more than what it costs to operate, but way less than what many Personal Finance blogs make that have been around for 4+ years. I think there is a lot of confirmation bias in income reports of these blogs. Blogs that make money are more likely to last longer, hence why there are a lot of 5 year old blogs that make 4 – 5 figures a month. The ones that made a lot less stopped existing…maybe lol, just a thought. I also put very little effort in SEO and article promotion…ok, no effort whatsoever, so that’s probably a big factor too.

2018; actually last night:  I bounced my bank account for the second time in my life yesterday.  I have 2 separate bank accounts. My primary account receives my direct deposits and pays the vast majority of our bills.  I set this one up with the same company we have our mortgage with in order to save .25% on our interest rate.  My secondary bank account I have at another credit union and is the bank account I started when I was 6 years old.  This account is mainly used for transfers of money between Mrs. C. and our kids who all have accounts at that bank.

A little over a year ago these two banks were planning on merging.  To get ready for this I started transferring accounts over to my secondary bank because this was the entity that would “survive”.  Well, the deal fell through and I had transferred both our electric and gas bills.  Over the past year I have made sure to keep enough money to pay these in that account.   Well, I finally had enough of it and dealt with the electric company and gas company and told them to start withdrawing payments from my primary account, then I could be done with worrying about it.  What I didn’t think about was that apparently this isn’t an instantaneous process.  Although I changed the bank info 2 weeks ago, it didn’t update for this month, and I had already transferred money out of the account, *knowing* that I had cancelled the bank drafts.   So when both the gas and electric company withdrew money on the same day my bank account bounced by $37, costing me a $30 NSF fee from my bank.  Oops.

When you read about the success people have on social media or on blogs just keep in mind that we often share the highlight reels and you never get to see the behind the scenes.  It’s certainly not a fair comparison.  There isn’t a person alive who doesn’t have significant failures in their lives.  What have been some of your most notable failures?