You are here: Home › Savvy Consumer › Is Your Electric Bill Too High? Here’s How To Fix It 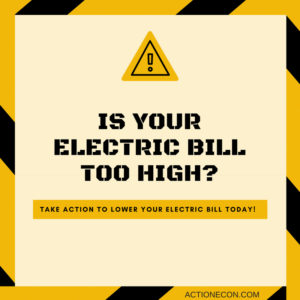 Is Your Electric Bill Too High Compared To The National Average?

Is Your Electric Bill Too High Because You Use Too Much Electricity?:

Utilizing these strategies I have lowered our average electric usage from around 1,000 kWh per month to around 600 kWh per month for a family of 6 in a 1900 square foot house. In May we hit a record low of 557 kWh for the month. Implementing these changes provides the most bang for your buck if your monthly electric bill is too high.

Is Your Electric Bill Too High Because You Haven’t Switched To Time Of Day Billing?

Time of day billing isn’t used by all utilities but if your utility offers this option it can save you a bundle.  A few years back I looked into switching to time of day billing but with our work schedule it wasn’t feasible to switch over.  With time of day billing instead of paying 1 rate all the time for electricity you pay a much lower rate when other people aren’t using a lot of electricity, which is on nights and weekends, this is referred to as Off Peak hours.  You pay a separate, higher rate during peak hours which is generally Monday through Friday during the day. For my utility this was 7AM – 9PM Monday through Friday.  This billing arrangement can work very well for a household with kids in school and both parents working during the day. 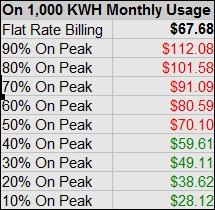 A few years ago I went through all the details on my utilities program for time of day metering, which by the way isn’t advertised at all, I had to hunt for it.  Anyways during this research I created the chart to the left that covers how much money you can save by switching to time of day billing for a household using 1,000 kWh per month.  If you are only using 500 kWh you could cut the numbers in half.  My utility recently raised all of their rates by over 20% so these rates are not current, but the idea and the proportions still are.

This is a little extreme, but in some areas of the country it makes sense to install solar panels and a battery system.  This works best when used in a state that offers net metering and with a utility that offers time of day billing.

The way this works is you keep the system tied to the grid and your solar panels generally produce enough power to supply your home.  You have a battery connected in the system as well. During the day when demand is high you aren’t using the power you produced, you are selling all the power your panels are producing to the grid and you are depleting the battery which filled up on power at night using time of day metering for a really low rate.

Many areas with net metering which allows this setup will not allow you to receive a negative bill.  If you produced more power than you consumed or even if the amounts were equal but you used power that cost 2 cents per kWh and sold power back at 6 cents per kWh, then you would have a positive balance.  This positive balance is then carried forward and could be used in the winter when the sun doesn’t shine as much.

Overall there are way too many details that go into optimizing this system. I live in Michigan, which  does not have the solar resources that say Arizona does making solar power not as feasible as it is in the southwest.  My utility does allow time of day metering and has a net metering program, but they will not allow you to be part of the program if you install solar panels that would exceed your homes average usage.

Alternatively you could go fully off grid with the correct amount of solar power and battery backup.  This could easily be an investment of $15,000 to $30,000.  Currently systems such as this and the grid tied systems qualify for a tax credit of 30% of the system cost.  This drops to 26% in 2020, to 22% in 2021 and then disappears for residential projects. Many individual states have subsidy programs as well to encourage adding solar power.  Most of these are stackable with the federal tax credit and combined can make installing a solar power system a really smart move. Check out this list of energy efficient tax credits available throughout the country.

The best place for solar? Hawaii.  Electric rates are really high at over 30 cents per kWh and the island gets a lot of sun.  Hawaii also offers a state tax credit of 35% for the cost of a system up to a maximum credit of $5,000.  This is in addition to the federal incentive.  If you get a $15,000 system then you would receive $5,000 in tax credits from the state of Hawaii and $4,500 from the federal government, giving you a net cost of only $5,500!

Taking this a step further, you could probably get a 5KW system installed for $15,000 (no battery included).  A 5KW system in Hawaii should produce over 500 kWh of electricity and completely get rid of a $150 per month electric bill.  The system pays for itself in 30 – 36 months when tax rebates are added in.  Over a 25 year estimated life (and the panels will work much longer than that, just at a slightly reduced capacity) the total savings will be over $45,000.

Compare Utilities If You Are In A Deregulated Market:

Is your electric bill too high because the utility company has a monopoly? This has changed in several areas with competition being introduced to the electric market in some states for the first time.  The state of Texas for instance has a deregulated market and The Public Utility Commission has build a website called Power To Choose where you can compare rates from different providers. Consumers in Texas may be able to save hundreds of dollars a year by switching their provider, but only 16% of customers in Houston have made a switch. Some analysts believe over $2 billion in lost savings PER YEAR is getting left on the table.  People in Texas are aware that the market is deregulated but it just doesn’t seem to make it to the top of the list to shop around for electricity rates.

Is Your Electric Bill Too High Because You Don’t Get A Discount Or Assistance?

My utility Indiana Michigan Power participates in a nation wide program called LIHEAP: Low Income Home Energy Assistance Program. This program receives 3.39 Billion in funding per year.  Each state can choose its own detailed terms for the program, but all programs must follow some federal guidelines.Households must be under 150% of the Federal Poverty Guideline (currently $37,650 for a family of 4)  or at 60% of the State Median Income AND no less than 110% of the Federal Poverty Guideline. The benefits also must be proportional to households with the greatest need and number of household members, with a focus on households with elderly, disabled, and young children as members. In most areas this assistance is limited to help for the utility that is your main heating source.  LIHEAP won’t pay for your entire bill but should be able to make a decent dent. LIHEAP may also assist with weatherization issues and fixing or replacing broken furnaces or air conditioners.

Some utilities also have a “good neighbor fund” where residents can choose to pay a bit extra per month into a fund that is used to help people in need who don’t qualify for government program assistance.

Many utilities offer discounted rates to senior citizens.  Georgia Power for instance offers seniors over age 65 with a gross income of under $24,280 a discount of up to $24 per month.

Is your electric bill too high? What action are you going to take to lower it?