Last Spring I wrote about how I found a KILLER deal on LED bulbs at Wal-Mart.  At the time I was buying bulbs for under a buck and was able to replace virtually all of the lighting in my home with LED bulbs.  Those good ol’ days are gone and Wal-mart, at least in my area, is back to charging full price for their LED bulbs. That’s no reason to despair, some really good deals can still be found if you look hard enough.

Competition and innovation is causing the retail price of LED bulbs to drop.  Most 40W and 60W equivalent LED bulbs can be found for around $8, instead of the $10 retail price we were seeing last year.  There are 75 watt and 100 watt models on store shelves now, but most cost around $20 a piece.

Are LED bulbs worth the investment?

A19 Bulbs: A19 bulbs are your typical light bulbs. A 60W LED bulb typically runs at 11.5 watts, while a CFL 60W runs at 13 watts.  Even if the bulb lasts over twice as long as a CFL, it most likely won’t pay for itself.  The big savings I have found has come from replacing 60W CFL bulbs with 40W LED bulbs, which run at 7 watts. This 6 watt savings adds up quick and in my experience the 40W LED bulbs appear as bright as the 60W CFL bulbs. at a minimum they work great in hallways and bathrooms. Even if you use 60W bulbs, the light is better and it is instantly bright.

BR30 Bulbs: Another great source of savings is on flood lights.  Walmart has their 65W flood light LED bulb for $5, which isn’t too much more expensive than a traditional flood light. These bulbs only use 10 watts of power and produce a ton of light. I have them in my kitchen and in our motion lights outside.

Candelabra Bulbs: Chandeliers use a stupid amount of electricity. My chandelier has 8 bulbs. If each was burning a 40W candelabra bulb, that’s a whopping 320 watts for 1 fixture. Replacing them with Walmart’s 25W LED equivalent bulbs which use only 4 watts each drops this to only 32 watts of consumption.  Last time I was at Walmart they had these for $1.50 each, well worth the price differential between incandescent or even CFL candelabra bulbs, and these are bright!

So…where can you get good deals on LED bulbs?

At Lowe’s today I found 40W and 60W LED bulbs for only $4 and $6 a piece respectively. That’s about half off typical retail. This is a pretty good deal. Lowes also carries the flood lights and candelabra bulbs, but most of these are priced high.

Although they did not have them on sale the last time I went there, Home Depot had the Phillips 60W bulbs for $5 and the 40W bulbs for $3 in November of last year.  I think this was a regional sale at the time, so it doesn’t hurt to check them out. 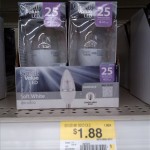 Walmart: In my area even though the A19 bulbs are no longer on a deep discount there are still great deals on the flood lights and candelabra bulbs.  Once again, they may have better (or worse deals) depending on your region.

Meijer: Last week at Meijer I came across these LED bulbs. These A19 bulbs were also on sale for $5 each. All other brands of A19 60W bulbs they carry were around the $10 price point.

Let’s say you are having trouble finding cheap bulbs for sale, there is still hope.  Many utilities such as Indiana Michigan Power offer rebates on LED bulbs.  Through the Efficiency United program they will give you a $5 rebate per bulb, for up to 8 bulbs.  This offer makes bulbs that are even at full retail a really good deal.

One more advantage of LED bulbs? Not having to change them! Most bulbs on the shelf today promote 22 years of life at 3 hours of daily usage.

Think about how awesome it would be to switch to LED bulbs now, and save money every month on your electric bill for the next 22 years, without having to do anything!  That’s winning in my book.  From switching bulbs in my house I save an estimated 185 KWH per month, which equates to about $20 per month in savings. Every month…for the next 22 years…Now take some action and go find some cheap bulbs, at least for your most used fixtures.