You are here: Home › Misc. › The Importance of Naming Beneficiaries 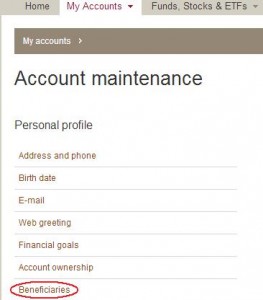 In all 401K, IRA, and HSA accounts, as well as life insurance policies and bank accounts, there is a form linked to the account naming beneficiaries if the owner of the account were to pass away. These forms are usually filled out when the account is created (if even at all) and are largely forgotten about. Over time our life situations change and so should our beneficiary forms.

Who to Name as Beneficiaries:

This is an issue that comes up a lot, usually when it is too late.  Most people will name their spouse as a beneficiary and move on to the next form.  In cases of divorce sometimes the previously named spouse isn’t changed.  Perhaps you intended to spread the accounts across all of your children equally, but forgot to make an adjustment when you had your last child.  Mistakes like this happen all the time. This is why it is imperative to review beneficiary designations yearly. Assigning secondary beneficiaries is also important, this allows for assets to pass directly to someone else if the account owner and the primary beneficiary are both deceased.

Life Insurance, apart from typical asset accounts needs to have a named beneficiary.  If a term life policy has a named beneficiary, it then generally passes to that beneficiary tax free (and relatively quickly).  If a beneficiary is not named, the entirety of the policy goes to the estate of the deceased and depending on its value, the value of the estate, and current tax laws, may become taxable. With the volatility in our estate tax laws, this could cause a major tax bite, leaving beneficiaries with much less money than originally intended.

What’s worse than not naming someone as a beneficiary? Accidentally naming two people as beneficiaries for the same asset.  Most forms allow you to split up beneficiaries by percentage, which is totally okay, but what if you fill out your children as equal beneficiaries on the form, but in your Will didn’t change it when you updated your beneficiary form?  Discrepancies like this can keep money held in probate for months or even years. Typically the beneficiary form wins out over a Will, but why take a chance?  The best way to handle this is to not mention accounts with named beneficiaries in wills at all, and to make sure your loved ones know where your will is.

When was the last time you checked up on your beneficiary designations? While reviewing mine I found that we forgot to assign beneficiaries for one of our IRAs, not a mistake we want to make!

One Response to "The Importance of Naming Beneficiaries"