You are here: Home › Savvy Consumer › Funcoland: The Place For Frugal Gamers in the 90s

Last week I posted an article on my top frugal finds, what I didn’t include in that post was the number one place for a geeky 90s kid to save some money; FuncoLand.  FuncoLand was the coolest place on earth when I was a young teenager.  The start of my true frugal roots most likely started with video games.

If we take a ride in the wayback machine to 1998, the video game industry was an expensive place.  The Nintendo 64 in my mind was still the coolest system, but due to sticking with cartridge technology, new games were expensive, often topping $60.  Heck they had a system of offering games that sold over a million copies for a reduced price of ONLY 39.99. We all know that used stuff is cheaper than new stuff and video games were no exception.

In South Bend, Indiana FuncoLand was right across the parking lot from a book store (There used to be physical locations where people visited to purchase printed content) that my parents used to go to.  The first time I walked into a FuncoLand I was in heaven.  I thought the pricing of stuff had to be a joke.  Original Nintendo games and accessories for under a dollar, Super Nintendo games really cheap as well? Time to blow my allowance!

FuncoLand had a newsletter that they printed every month with the price list of all their games, and I do mean ALL.  Here is a copy of one I found online: 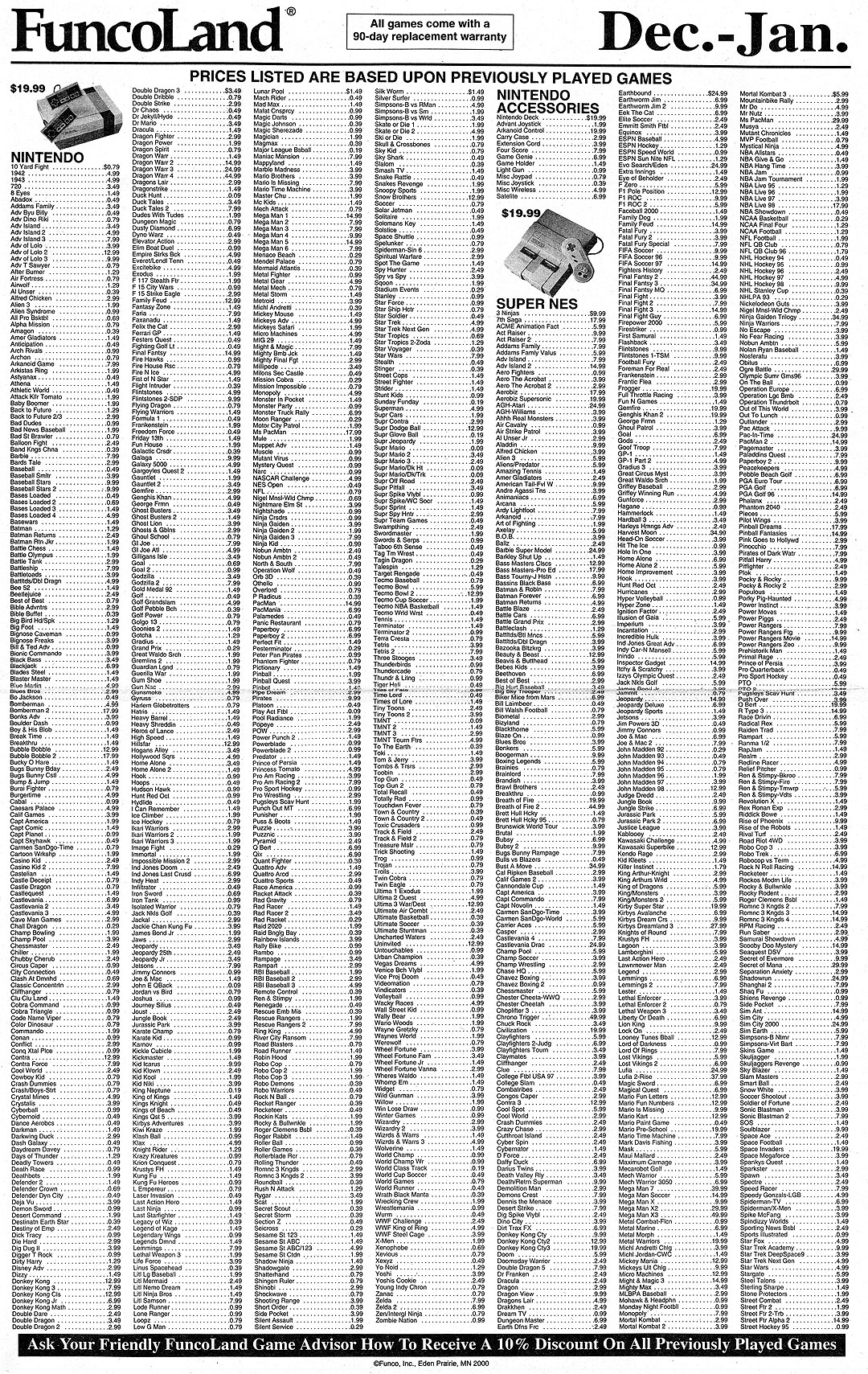 My Collection of Games and Accessories From Funcoland:

Over the next few years I amassed a collection of NES games in the hundreds and dozens of accessories. I remember walking in there with a newsletter list of all the highlighted games I wanted and buying the ones they had. I systematically started at the cheapest games and worked my way up.  I think I walked out of there with over 30 games for under a 10 spot more than once. My real passion was the accessories though.  I liked having options when it came to the controllers and some of them were legitimately better for some games.  For a while I even joked that I had one of the largest collection of NES accessories on earth, heck I might not have been far off. 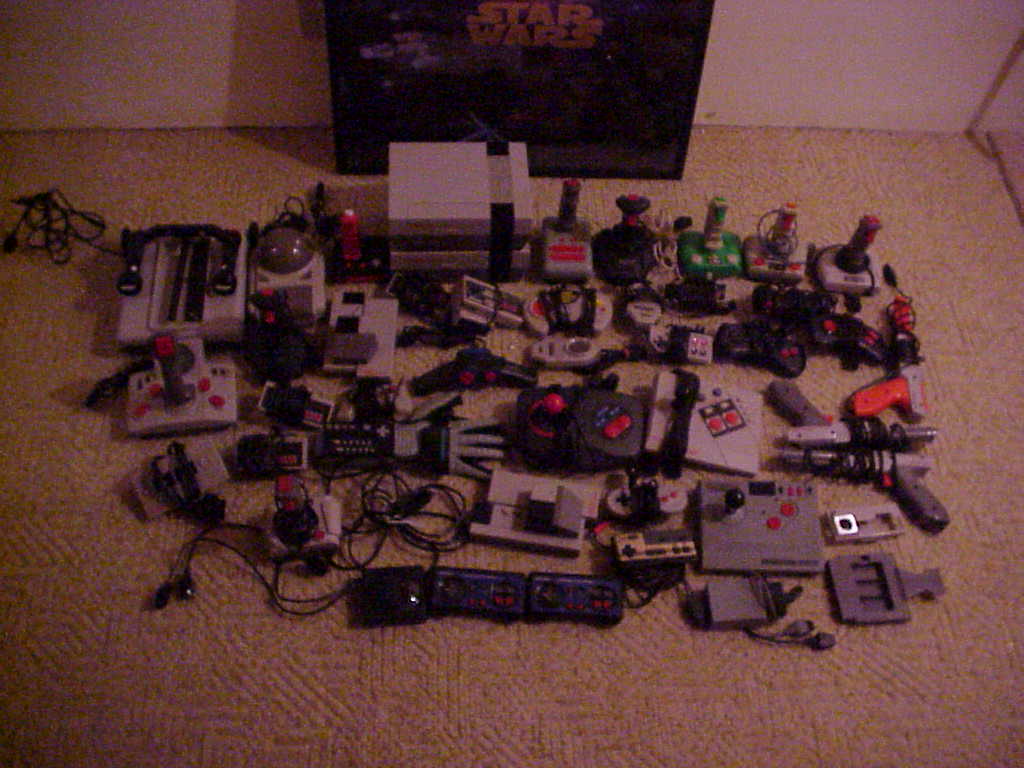 44 if I counted right…This didn’t even include the R.O.B. or the power pad. I think I had twice as much stuff total when I sold off my collection.

We took FuncoLand for granted.  I remember going to Holland, MI solely to visit their FuncoLand.  I found tons of cool stuff at FuncoLands and visited one any time I was in an area that one existed.  I remember one visit where I bought about 20 NES games for like 5 bucks and the guy asked me if I wanted any of the black plastic game covers, I said absolutely, he then brought out a trash bag with over 100 of these things in it and just gave it to me! I felt like he just handed me a 100 bucks.  In the online NES collector community, (yes such a place exists/existed), Funcoland was often the butt of our jokes.  We made fun of them for the lack of knowledge of obscure 15 year old video games the employees had, and how they always tried to sell you a cleaning kit.

I briefly had a plan (now keep in mind I was 14 – 15 at the time) to buy up all the mario/duck hunt games and sell them in the future to make a profit, because they have to really be worth more than 9 cents right?  I think my collection of these cartridges topped out at around 20.  Fast forward to present day and these cartridges routinely sell on ebay for around $5.  Had I purchased 1,000 cartridges at 9 cents a piece, I would have paid $90 and could sell them for $5,000.  Over 15 years that’s a 30% annualized return.  Ahhh the missed opportunity of not buying up all of Funcoland’s merchandise.

When I heard that Gamestop was acquiring Funcoland it was a sad day.  I hoped they would just change the name on the sign and continue to operate the business as is.  Not so.  They killed FuncoLand, stopped carrying classic games, and jacked up prices. It wasn’t much longer before I ended up selling off the bulk of my collection, it turns out by the age of 16 having a stack of cash is WAY cooler than having a giant collection of vintage video games. I sold my collection mostly one piece at a time in the early days of half.com before eBay owned it. I retained a few of my choice games and own an FC Twin to play them on, I plan on getting a Retron 3

, which plays SNES, NES, and Genesis games in the near future.

Does anyone else remember how awesome this place was?

3 Responses to "Funcoland: The Place For Frugal Gamers in the 90s"