You are here: Home › Saving › Stack Your Money And Act Broke 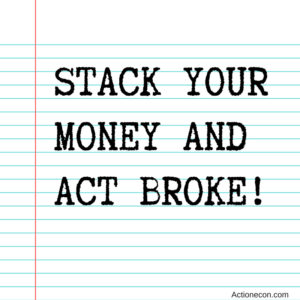 The most important parts of personal finance are the simplest. Last week I came across this image on Facebook and fell in love with its simplicity.  Stack your money and act broke.  6 words, but a whole lot of power. I must be on the wrong track with writing 1,000 word articles all the time, the best way to reach people is through phrases that can be put in on a simple Facebook image.

We have a problem in this Country. In the richest nation that has existed in the history of mankind 2/3 of American’s can’t cover a $1,000 emergency.  I used to be one of them.  When you are broke literally everything is an emergency.  The gas bill being $100 more than last month because Winter started is an emergency.  Your hours got cut by a shift this week is an emergency.  The local gestapo gave you a $250 ticket for having your grass too long is an emergency.  Having a cash cushion is the only good way to deal with these things.  Every year I have had several of these expenses come up.  We don’t know what they are going to be, but we do know there will be SOMETHING.  When it all comes down to it, the best action I have ever done financially is build up a cash cushion.  Take this simple advice and put together a bit of cash this year.

Stack Your Money And Act Broke:

Don’t over complicate things.  Don’t worry about investing right off the bat.  Don’t worry about 401Ks, IRAs, HSAs or buying rental properties.  Step 1 is stacking cash.  When 2/3 of Americans can’t handle a $1,000 emergency, stacking your money is essential.  Be 1 less person living paycheck to paycheck. Challenge yourself to stack $1,000 in 3 months, then challenge yourself to do more.  Just put it in a bank account that isn’t tied to a card until you have at least 3 months of living expenses saved up, THEN look into investing. Set up an account at Betterment and watch your money grow. Sell some stuff, work some extra hours, and cut down on your expenses temporarily to get that cash cushion rolling. Take an hour each week to look for a second job or a better job.

What Does Acting Broke Mean?

My first take on acting broke, is stealth wealth; the act of showing others that you are broke to avoid being hit up for money or being judged negatively for building/having wealth.  When I think a bit more deeply on acting broke, I would rather designate it as acting broke to yourself and your thought processes.  When looking to buy a book, a movie, a theater ticket ask “Do I have money?…Oh, wait a sec, I’m broke.  skip it.”  Acting as if you are broke to yourself is what will cause you to save some real money.  When you are truly broke you have a necessity to challenge every expense, every line item, every dollar.  Do this all the time and your cash will pile up.  Think along the lines of:

YEARS ago I remember personal finance being equated to a bathtub, the water trapped inside is your wealth. The faucet is your income and the drain is your expenses.   If the drain is wide open and you have just a trickle of water running in, nothing builds up.  But if you have the faucet on full blast, keep the drain to a trickle and let it run for a while it fills up fast.  It fills up even faster if you add a hose running into it (a side job).  Close the drain, open the faucet. This visualization has helped me with saving money.

Over time we allow our bills to catch up with our income, which is why it isn’t just low income people who can’t afford these expenses. An astonishing 46% of the highest income households surveyed, those with incomes over $75,000 a year could not cover a $500 – $1,000 emergency.  In our society income and wealth are not always correlated.  There are plenty of people earning 6 figures whose world would come crashing down if they missed a paycheck. There’s nothing wrong with having a decent income, but there is something profoundly wrong with making a lot of money AND still being broke.  Don’t be like those guys.  Stack Your Money And Act Broke. Take the quarterly savings rate challenge and change your life!

Track Your Money While You Stack It:

What are you doing to stack money this year? Are you willing to act broke to get ahead? Check out Dave Ramsey’s Book The Total Money Makeover

to get started on taking control of your money.

18 Responses to "Stack Your Money And Act Broke"