You are here: Home › Home Ownership › How We Financed And Rehabbed Our 3rd Rental Property 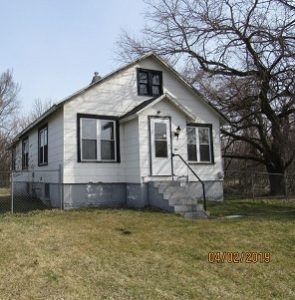 In May we closed on a 3 bedroom house on half an acre that we paid $20,000, bringing us to 4 total houses.  Over the past 8 weeks we have fully rehabbed this house, spending another $12,000 to get it to where it needed to be. Our current goal is to expand to a total of 10 rental properties over the next 5 years, concentrating primarily on 4 bedroom and 5 bedroom houses. If you’ve been wondering why my posting schedule has been light this summer, you have your answer!

Last fall we took out a heloc on our primary residence to act as temporary funding for rental property purchases.  We were really conservative on the amount and our entire heloc line with our mortgage balance is roughly 60% of the value of our home.  Because we have paid down so much on our primary residence we have the cushion available to use our heloc for temporary funding. This allowed us to make a cash offer which is much more appealing to sellers.  We paid $20,000 “cash” through our heloc and had $430 in closing costs.

The fair market rents for our 3 houses are $1,100 for our first rental, $650 for our 2nd rental, and $800 for our 3rd rental, for a combined gross income of $2,550 against $574 in a mortgage payment.  With that being said our 3rd rental will still be rented at less than fair market rate to Mrs. C.’s mom. This house is a lot more practical for her.  It is a 3 bedroom instead of a 5 bedroom, it has half the square footage, which should translate into half the heating cost.  The windows are all new double paned locking windows compared to single paned 1940s windows in her current house.  The house is pretty much all one level instead of 2 stories.  It also only has neighbors on 1 side.  Her current house has neighbors on both sides and behind her. This house also has central air which is a big plus.

This house was listed at $23,000 back in April as a foreclosure.  We offered $20,000 cash and the bank accepted our offer.  This is one of those situations where in retrospect I feel I should have offered less. It had only been on the market for 3 weeks so I figured they at most would give a 10% discount, but since they accepted my initial offer of a 15% discount I think they may have been more open to a larger discount. 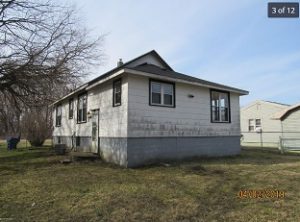 The house was originally a 2 bedroom house with a kitchen and living room that was built in the 1940s and then had a 2 room addition put on sometime in the 50s or 60s.  It’s now a 3 bedroom house with a total of 6 rooms.  The house has a basement under the original structure and sits on a partially wooded 1/2 acre lot just outside of Benton Harbor, MI.

Most of the work that was needed on the house actually turned out to be as a result of the bank’s actions during and after foreclosure and not of the original home owners.  The biggest issue is that they shut off the electric and water to the house.  This house sits in a low lying area and has a sump pump in the basement floor with drainage pipes running under the basement floor to it.  With no power the basement filled up with water.  This caused moisture and mold issues in the house and of course destroyed the furnace which was submerged. Shutting off the well allowed for the screen to get clogged, and essentially killed the well. I also should note that this was one of the top 3 wettest years on record in our part of Michigan.

Ultimately we have $32,000 invested in a house that we can rent out for $800.  Mrs. C’s mom will stay here the rest of her life and then after she passes we will rent it out at market rate. After I win my next property tax appeal the property taxes here should be around $50 a month. The insurance is $45 a month.  Add in $50 per month in maintenance and the net cash flow will be $655 per month or $7,860 per year.  This means the house pays for itself in right around 4 years.

This house is a perfect example of why you need large cash reserves when doing real estate investing.  We ran into roughly $7,000 of costs over what we anticipated.  Going from an estimated $25,000 to $32,000 was a big change and if we didn’t have the extra $7,000 sitting around the project would have been delayed and could have failed entirely.

Another issue we ran into was insurance.  We originally insured the house through Allstate, with all our other insurance, however when the adjuster actually came out they said they could not insure the house because it has asbestos siding.  Another lesson learned.  We have it insured through a different company now.

I still need to touch up the paint on the exterior trim, bury a drain line for the sump pump and grow grass seed in the front yard.  Mrs. C.’s mom is 90% moved in and we are starting to get Rental #1 ready to rent. Overall this was a much bigger project than what I want to be going after.  With future houses we will be looking for properties not in need of as much work.

I’m really glad we did this project.  This house is a turning point for us on our path the building wealth through real estate.  It was a big win that Mrs. C.’s mom found a house she wanted that was half the price of the houses I was looking at for her.  I learned a ton on this project that will be helpful for future houses and can’t wait to apply the new knowledge.

Have you renovated a house? What did you learn throughout the process?