You are here: Home › Taxes › If The Federal Government Were a Household 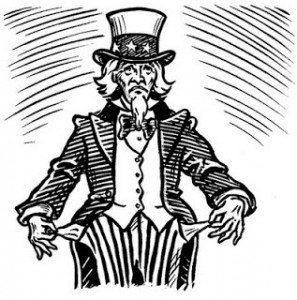 If The Federal Government were a household, its balance sheet would look something like this:

Of course the Federal Government is not a household. They have unique characteristics that the average household doesn’t have.  They have the ability to increase income through legislation (increased taxes). They have the ability to borrow a seemingly infinite amount of money, based through the US Dollar being the reserve currency of the world and the existence of the Federal Reserve System.  And of course, they can always print more money (through the Federal Reserve System).

So why point this out if it isn’t a rational comparison anyway?  Because these numbers demonstrate that over time SOMETHING will have to be done, and by looking at history we can see that our government does not like to cut expenses, so most likely taxes will increase over time, maybe gradually or maybe drastically, like the tax rates following World War 2.  Having an educated guess as to what direction tax rates will go helps to determine an overall investing and saving strategy. For instance it may make sense to adjust more money into Roth accounts instead of traditional accounts if you believe overall tax rates in the future will be greater.

Another reason to think that taxes may go up in the future, other than the current state of the federal government’s finances, is that tax rates are by historical standards, very low.  Yes,the income tax didn’t exist until 1913, and at first it only covered the extremely wealthy, but in most decades tax rates were higher.  The highest tax rate in 1913 was 7% by 1920 it was 73%, in 1940 it was 79%, in 1950 it was 91%, in 1970 it was 70% and stayed that high until 1981. Yes, for recent history tax rates have been low, but also since 1981 (actually 1979 is the key year) our deficits have skyrocketed.  These “low rates” most likely will not last forever.  Another fact about these historic tax rates is that for the most part there were several more brackets with a gradual increase in marginal rate, rather than large drop offs (think 15% to 25%).

Historic Tax Data obtained from Tax Foundation.org. They have an amazing amount of data that compares all historic federal tax rates and brackets in both nominal and inflation adjusted numbers. Federal government household figures based on the following actual data (Cut 8 zeroes and doubled the remainder to get close to median household income)

*(Does not include unfunded social security and medicare projections.)