You are here: Home › Home Ownership › Buying A First House; What My Brother In Law Did To Become A Homeowner At 25

I hear a lot of people say that buying a house is almost impossible to do for most millennials.  My brother in law who is 25 just bought his first house.  Unlike many of the success stories you hear about on personal finance blogs, he isn’t earning $100K nor did he get a gift from the bank of mom and dad.

I didn’t ask to go through every inch of his paperwork, so I don’t have all the exact details, but I have enough to paint the full picture of how he bought his first house, and how anyone can do the same.

Preparing To Buy A First House: My Brother In Law’s Story:

My brother in law currently works as a delivery driver for a retail store.  His hours have bounced around between 30 and 40 hours per week, but with this move to South Bend he will be in a full time position working 40 hours per week.  His girlfriend who he is buying the house with works as a server, with most of her wages coming from tips. My brother in law has had the advantage of being able to continue living with his mom for multiple years after reaching adulthood.  I used to think that kids should be out of the house shortly after graduating from high school, but as time has gone on I have come to believe that letting responsible young adults stay in the house for a few years after reaching adulthood is perhaps the best thing parents can do for their children, to give them a solid start in life.

The last couple years he has been saving up a decent part of his wages, and had the foresight to buy appliances and furniture ahead of buying a house.  In addition to saving up money he started to build a credit profile by getting a credit card two years ago and paying it off every month. He’s worked in the same type of job for over 2 years and did considerable research into where he wanted to live.  He also read a few of my articles on buying a first house; which I hope proved helpful. Most important of all, he waited until he was financially ready to buy a house.  2 years ago he really wanted to buy a house, but didn’t have much in savings and didn’t really know where he wanted to live.  It’s extremely hard to delay gratification, especially for something as big as a home purchase, but I truly believe that waiting that time put him in such a better situation when he finally did become a home owner.

He decided that Benton Harbor was not the right place for him, but he still wanted to be close to family.  Him and his girlfriend both wanted to be in a larger city, but also didn’t want to have to pay a ridiculous amount of money for a house.   A good balance was South Bend, IN, which is about 35 miles from Benton Harbor.  South Bend has a population of just over 100,000 people. South Bend real estate is relatively inexpensive, especially when compared to Grand Rapids, MI; in fact South Bend was featured in a CNN Money article a few years ago titled “10 Dirt Cheap Housing Markets”  Where it featured a 3 bedroom 2 bath home for $75,000.

He kept his eye on the housing market and was able to be the first person to put in an offer on a newly listed foreclosed house in April.  The bank accepted and he closed on the house last month. 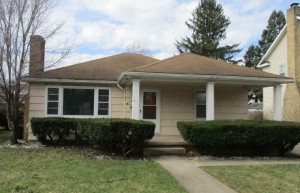 His house is a 3 bedroom 2 bath house with a 2 car garage, a full partially finished basement (that actually has a fourth bedroom in it) on a small city lot.  It’s in a nice area of South Bend, IN and the houses in the surrounding neighborhood are all well kept.  He’s close to the airport, Notre Dame University, The Morris Performing Arts Center, and where he works.

This house has a couple cool features that I love.  First of all it has a laundry chute in a hallway closet that is right outside the doors to all 3 bedrooms.  Drop you clothes in the chute and they end up in the basement near the washing machine.  The second cool feature is the attic.  Above the insulation there is a flooring covered about 80% of the attic space for storage, I think this is a major plus.

Factors of Success When Buying A First House:

Buying A Low Cost House: The house cost just under $45,000.  I’m not sure exactly what he earns, but my guesstimate is around $11 an hour working a full time job.  This equates to $22,000 per year.  He bought the house with his girlfriend who makes a similar amount.  The cost of their house is about 1 years income, which is extraordinarily low by U.S. standards…and their incomes are on an uptick and have plenty of room for growth.

The house was listed at $45,000.  With no down payment, a 15 year mortgage at 4% interest would be $333 per month.  Taxes based on this sale price would be around $500 per year.  Homeowner insurance should also be around $500 per year, for a total monthly cost of $433.  Add in PMI of $40 per month and in a worst case scenario the total house payment is $473. As a percent of total gross income this would come out to roughly 13%, FAR below the lending guidelines of 33% of gross income.

Not Buying The Top Of The Neighborhood: Other houses in the neighborhood have sold for $60,000 – $80,000 recently.  This house is actually the lowest priced house that has been on the market in a while.  The two primary problems this house has is that the exterior paint is flaking off and the gutters need replaced.  Since this is a single story house, both of these are relatively easy and inexpensive fixes. Once these fixes are done I think his house could easily be worth closer to $60,000.

Renting Out A Room: The best part of this whole deal is that he is renting a spare bedroom out to a friend.  He’s charging $250 a month, which is extremely cheap rent for his friend, but it’s also over half of the house payment, including taxes and insurance. After rental income, in a worst case scenario that he didn’t put down 20%,  his true out of pocket house payment is only $223 per month, or roughly 6% of total annual income.   Very few people can get their housing cost down to such a low percentage of their yearly income.

Having An Emergency Fund:  My Brother In Law still has a sizable emergency fund after closing.  When Mrs. C. and I purchased our current house we only had a couple grand in the bank and our loan almost fell through because of a lack of cash reserves.  Keeping a solid emergency fund in place is so important, especially when buying a foreclosed house.

My brother in law and his girlfriend are in their early 20s, will have a paid off home by the time they are 40, and pay roughly 25% less of their income to housing costs than a typical American family.  Even without large income gains, they will be ridiculously wealthy,  like millionaires several times over wealthy if they apply what they are saving on their home to wealth building and if they choose to stay in this home long term.  You don’t have to have a college degree, you don’t have to have a six figure job, and you don’t need a line of credit from the bank of mom and dad to become wealthy in this country. I’m super proud of him and his girlfriend and they look to have a bright future.

Have you bought your first home yet?  What was the process like for you?

4 Responses to "Buying A First House; What My Brother In Law Did To Become A Homeowner At 25"