You are here: Home › Home Ownership › How To Buy a House at the Tax Auction

It’s that time of the year again, when houses, land and businesses are sold by the county for back taxes owed.  I am not getting into the politics of the county tax auction system, but I will mention that there are some people who have reservations about the concept of government being able to take land from citizens due to failure to pay back taxes.  If buying a house at tax auction messes with your moral compass, then I would suggest not doing it. I personally have mixed feelings about it, but the way my county treasurer handles the process eases my conscious.

In Michigan each county conducts their own auctions.  Properties are sold after failure to pay taxes for 2 years, so the properties on the auction block today failed to pay 2012 and 2013 property taxes.  Property taxes in most parts of Michigan are relatively low.  Every house I have owned property taxes have been around 1% of the total value of the property.  For non-homestead properties the total is about three times as much. Our county treasurer works with homeowners to make payment plans to stay in their houses, but there are some who choose not to.  Recently Michigan passed a law allowing county treasurers’ to charge a lower interest rate on back property taxes, which should help reduce the total number of properties being sold at auction.

The tax auction is done obviously to keep the tax rolls filled and to get rid of derelict structures.  Several of the properties that end up on the auction block are abandoned structures that have fallen into extreme disrepair. The treasurer makes the determination if the structure is to be torn down. The excess funds the auction generates pays for these demolitions.

Berrien County in June posts a list of all the properties up for auction. This years list includes 318 properties. 78 are houses not to be torn down, 41 are houses scheduled to be demolished, 193 are vacant lots, 5 are commercial properties, and 1 is a garage.    Of the 78 houses, 36 are occupied and 42 are abandoned.  The first Auction will be held in July, right down the street from my house.  At this auction the minimum bid is the amount of back taxes owed to the county.  The county will have up to 3 subsequent auctions after this initial auction.  The second auction is held on line, the third auction will be held in the southern part of the county and the fourth auction, if there is one, will be held at the same place as the first one.  At the final two auctions, held in mid September the minimum bid is $50.  It is rare that any properties are remaining after this.

Bidders have to put down a $500 deposit, which will be refunded if they don’t buy anything.  Typically the auction is filled with people. Each time I have attended the room has been stuffed with hundreds of people.  Our Treasurer works very hard to help keep property owners from loosing their property, especially people who are in danger of losing the house they live in.  He makes extra contact with them and offers to set up payment plans, which he doesn’t have to do.  Most of the houses that end up at the auction block were investment properties. 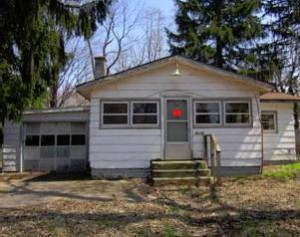 Some of these homes are occupied, and the winning bidder would have to officially evict the people who are living in the home.  Another option would be paying them to leave, which may work better than an eviction route. The current occupants may be less likely to destroy the property in any way and it may even be less costly.

Homes that are on the auction block can not be legally inspected from the inside.  Potential buyers may inspect the outside of the homes, but all secured structures may not be entered.  This is done mainly as a liability issue, so the county doesn’t get sued when someone falls down a dark stairwell.  Occupied structures can only be viewed from the inside with permission from the people living there.  Good luck.

On abandoned properties peering in windows is okay, and you can get a general feel of what condition the property is in. The major problem is that the systems can’t be inspected.  Plumbing, electrical and heating systems needing repairs can add tens of thousands of dollars to repair costs, and these systems are most likely to be damaged and/or completely removed by scavengers.  I’d recommend talking to neighbors to find out how long the property has been vacant, and what they know about the property. 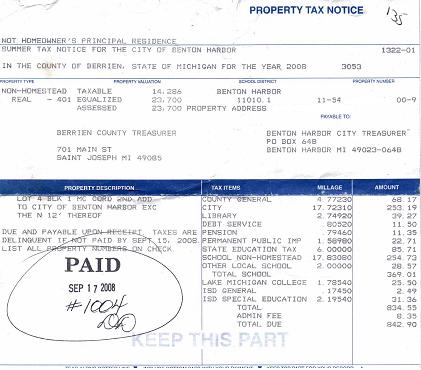 In addition to paying the wining bid price, the bidder must also pay the most recent tax bill.  Do some research and figure out what this bill will be.  The assessed value of the home is published on the auction list, so look this up and calculate it as a non-homesteaded property using the counties web application.  This should get you in the ballpark.

When I bought a house at auction several years ago I figured this bill would be a couple hundred bucks at most.  It was almost $1,000 because they had the property assessed crazy high (stating the property was worth around $47K when it was at best worth the $6K I paid for it), and it was non-homesteaded.

If you look at the bill There are 3 values: Taxable Value, Equalized Value and Assessed Value. In Michigan the Assessed Value they put on the homes are 1/2 the actual value.  In this case an assessed value of $23,700 means they think the house is worth twice that amount, $47,400.  In the early 1990s a ballot proposal called Prop A put a cap on property tax assessment increases, limiting them to 5% or the rate of inflation, whichever is less, this is where the Taxable Value comes in.  In the example above the taxable value was $14,286. Because of Prop A they could only tax the property as being worth around $28,500, but still about 5X what the property was worth.

When a sale occurs the taxable value will automatically jump up to the assessed value.  This means if I had not challenged the valuation, my next tax bill would have been based on a home value of $47,400, not $28,500, and certainly not the $6,000 it is worth, giving me a tax bill of around $1,400! 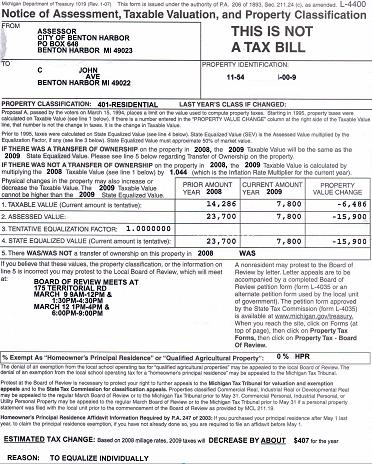 Renegotiate Taxes:  I wrote a letter to the assessor, and he came out and did a new assessment on the house. He lowered it to a value of $15,000, which wasn’t the $6,000 I was looking for, but it took a large bite out of the tax bill. At the new valuation, my tax bill would be around $460.  Writing a 10 minute letter and meeting with a guy for 30 minutes saved me $1,000 a year, for every year going forward.

Writing such a letter is imperative to making a house bought at auction work. Many of these properties are valued at levels substantially higher than their actual worth.  Last year a couple commercial properties came up for auction that were valued in the hundreds of thousands of dollars, but only sold for a few thousand, I hate to imagine what the past tax bill on those properties was!

Title insurance is important if you ever plan to sell the house.  Even though it is made very clear that all outstanding liens are extinguished, you still need to go to court to get clear title.  If you don’t do this you could end up in a dicey position when trying to sell. I ended up having to pay around $1,500 to settle the matter.  Filing for clear title in court is a relatively simple process and should only cost a couple hundred dollars.  Some of the auctions now include a title insurance option for only $500. If you have this option, take it. Otherwise plan to file for clear title as soon as possible so that if you ever plan to sell the property you can avoid this extra cost and hassle. The last thing you want to add to a stressful property transaction is an additional $1,500 in fees. 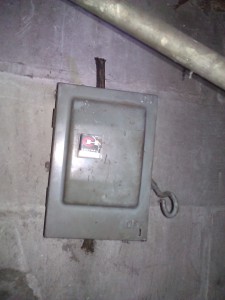 You have no idea how much repairs will be on these buildings.  I would say take the number you are thinking of and double it.  When you buy a house without seeing the inside, except maybe peering in the windows, there is no telling what is wrong.  Have more than enough liquid capital to make the building live-able.

Make the following assumptions: There will be no pipes or electrical wires in any exposed location.  Expect the breaker box to be gone too.  The plumbing system will be shot.  Extensive vandalism will have occurred.  Chances are the furnace is gone.  There may be a dead animal or two.  The basement most likely has water damage. There is at least one room filled with trash.  Even though the roof looks OK from the outside, it may be raining on the inside.  Expect and plan for the worst.

There are a few homes that are auctioned that end up getting used as primary residences. I think most houses that are sold end up being used as rental units.  The majority of parcels are pieces of vacant land, or houses to be demolished that will soon be vacant land.  These parcels are an excellent opportunity to expand your yard.  If you are lucky and a vacant lot comes up for sale by your house you can expand your yard.   Occasionally usable commercial properties come up for sale.  This auction features the old Payless Tire building that went out of business last year.  The bidding for that parcel starts at $46,000.

I heard about this a couple years ago in Detroit.  Apparently Detroit is hesitant to lower property tax assessments, and many homes are valued at well over 10X their actual worth.  Homeowners knowing that most houses that go to auction remain unsold, go to the second auction to buy back their houses (that they never left), avoiding the tax bills and resetting the valuation on the home.  An interesting concept, and at some point I’d like to write a full piece on the tax auction process in Detroit, because Detroit is a special animal.

I’m curious to hear other people’s experiences with the tax auction system in different parts of the country. Have you ever purchased a house at the county tax auction?