I lived in Benton Harbor city for 2 years then I lived in a house on the city line for 6 years. currently I live less than 5 miles from the city limits.  Benton Harbor is home to the world headquarters of Whirlpool corporation and has a population of around 10,000 people. Benton Harbor has struggled financially since, well….at least my entire lifetime.

Benton Harbor was a manufacturing town and at its height in 1960 had a population of around 20,000 people. Since the 60s the city has had a gradual decline as manufacturing jobs left the area.  In 2010 the state of Michigan stepped in and appointed an Emergency Financial Manager (EFM) to assess and resolve the fiscal crisis the city was in at the time.  The EFM essentially had power greater than that of the mayor and the city council.  Although the city is no longer running deficits and its books are in order, city pensions are still underfunded and the city has substantial debt.  Falling property values have also greatly reduced the tax base in the city.  Virtually all growth that has occurred in Benton Harbor over the last decade has included generous tax abatements of 10 – 12 years.  While main street in Benton Harbor was repaved with roundabouts added and landscaping along the path, the rest of Benton Harbors streets have been neglected.

The Ohio DOT states that pavings costs are approx. $120,000 per lane mile for 2 lane roads.  If this is the case, then $2 million per year would be able to pave roughly 16 lane miles per year, or 8 miles of 2 way streets. With this amount of progress it would only take a few years for Benton Harbor streets to show a massive improvement.  Michigan in general has horrible roads, and the roads in Benton Harbor are far worse than most cities.  Exhibits A – E: 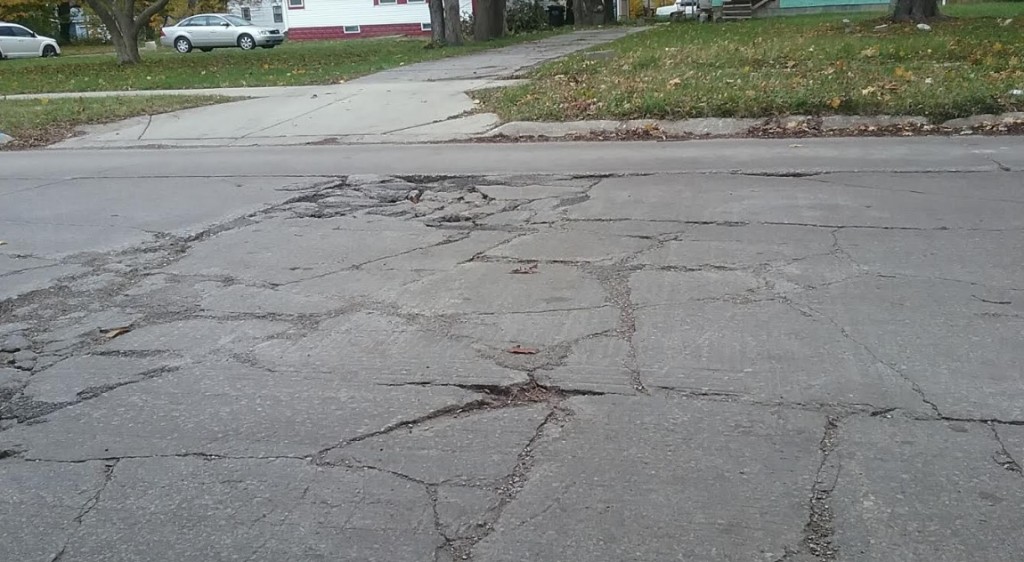 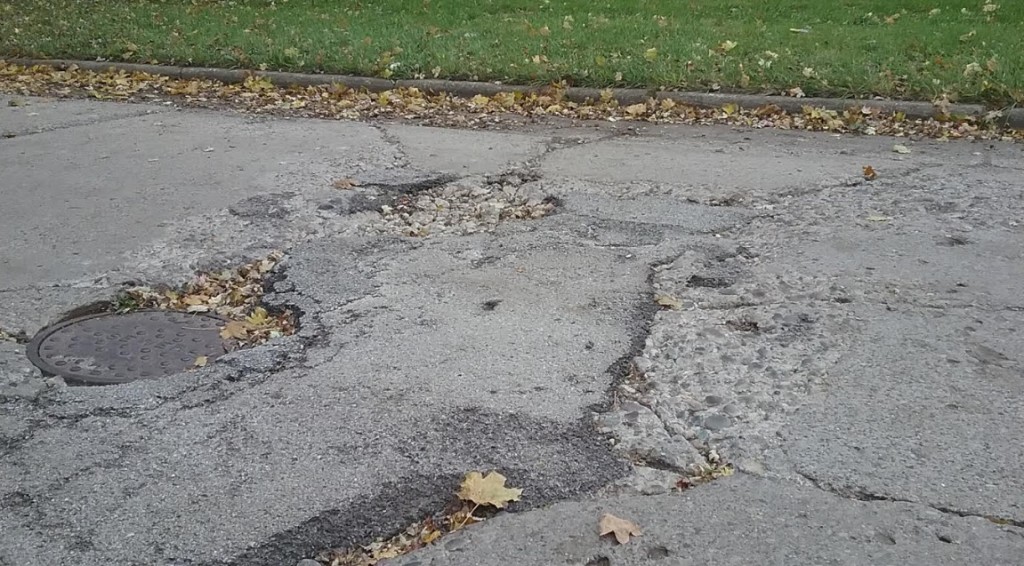 These are pictures I was able to easily take while driving around.  These are not cherry picked and are a fair representation of the roads in Benton Harbor.  There are some roads in better repair, but there are also some roads where you think you might destroy your car going down that are worse than these images.

The vote was very close, the city income tax passed 511 to 490. This means that 1,001 people voted on this issue.  In last years presidential election Benton Harbor had 3,402 votes with a total of 9,966 voters on the rolls.  I’m shocked that there wasn’t higher turnout due to how important this issue is. Less than a third of the presidential vote and barely 10% of total registered voters.

Here’s where the income tax comes into play.  Whirlpool employs 1,350 white collar workers at this campus.  These are mostly high paying jobs and mostly employees that do not live in Benton Harbor city.  If the average pay is $60,000 per year, then from these 1,350 workers,  each worker paying an income tax of $300 per year will net the city $405,000, roughly 20% of what Benton Harbor is expecting to net from this tax.

Jeff Noel, Whirlpools VP of communications and public affairs stated before the tax passed “If the tax is levied, we will need to explain to hundreds of employees why we just moved them into the Riverview building or the Benton Harbor Tech Center so they could be taxed at a higher rate than if they had not moved. ” He also stated: “It goes without saying that we will certainly avoid creating any future jobs in Benton Harbor and instead focus on relocating jobs elsewhere in the area,” Noel stated. “In fact we have begun looking at ways to alter our plans for a couple of properties located in the city of Benton Harbor and are working on ways we can relocate or avoid location of employees to reduce the unfairness this tax will have on them.”

What will be interesting to see is if Benton Harbor will use the money on road funding as promised, or if the money will ultimately go towards something else.  The city could theoretically designate all the income tax money to road funding, but then divert money currently being spent on roads from the general fund to other items and still be holding to the promise that all income tax funds are going to roads.

Do you live in a city with an Income Tax?  What were the results?