You are here: Home › Employment › Animal Bounty Hunting As A Side Hustle 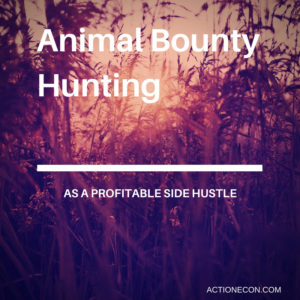 Hunters normally have to pay for tags to hunt wild animals, but sometimes the State will pay you to take some animals out of the area. Multiple states are willing to shell out cold hard cash in exchange for a bit of help in reducing nuisance animal populations. Animal bounty hunting could be an enjoyable side hustle for some hunters, provided you live in an area offering these bounties.

From 1915 up til the 1990s in Michigan you could get 10 cents per rat killed by turning in their heads to the county clerk.  I’m sure this was rarely used in later years, as a dime lost a lot of value in that time period.  A dime in 1915 when the law was passed was worth about $2.50 today.  I can see this being a fairly profitable job for kids.  Kill a half dozen rats after school and get today’s equivalent of $15. I can just imagine the look on my county clerk’s face if I walked in the door with some rat heads asking for a few dimes.  Unfortunately Michigan no longer has any bounties on the books, but there are some states with active bounties that pay well. 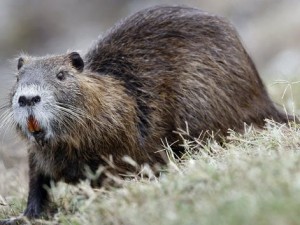 Nutria, a large sized rodent can grow up to 20 pounds and a female can have two litters a year of around 4 babies each. Nutria likes to eat plants down to the roots, causing widespread erosion, which is destroying Louisiana’s coast line.  Louisiana is paying a $6 bounty per nutria tail turned in.  It doesn’t sound like much, but some hunters are making some decent cash from this program. In 2014 Louisiana paid out $1.94 Million to 252 hunters for 388,160 Nutria tails. 42% or 105 of those hunters turned in over 800 tails each; That’s $4,000! As an added bonus, you can eat the nutria meat, which is fairly lean and you can sell the pelts. In neighboring Mississippi bounty programs are determined by each counties board of supervisors. State law permits them to offer a $5 bounty per nutria, bobcat, or beaver.

The pikeminnow is an invasive species of fish that likes to eat baby salmon.  Bounties for these fish are tiered, meaning the more you catch, the more you get paid. This is potentially the most lucrative animal bounty hunting program in the US.  From May 1 to September 30th The Bonneville Power Administration in Oregon, Washington, and Idaho will pay you to harvest these invasive fish from specific waterways.  The goal of the program isn’t to exterminate the population, but to reduce it enough to give salmon a better chance. The bounties paid are:

The top 20 anglers earnings are posted on their website.  For 2019 the #1 fisher earned over $53,000 while bringing in 6,482 fish.  #20 brought in 1,884 fish and earned $15,349. Not bad for 5 months of “work!” This would be a great compliment for a nuclear worker. We usually are off for part of May, and all of June, July, and August.  I’m gonna start recommending to the young single guys to head to Oregon in the summer! With this bounty you turn the whole fish in, they aren’t good for eating anyways. Interested in trying it out? check out Pikeminnow Rewards

Coyotes are dangerous animals to humans, pets, and livestock.  Many western states offer a coyote bounty.  In Wyoming you can earn $20 per pair of ears turned in and Utah has recently upped its bounty to $50.  You can sell the pelts, which have some value and you can eat the meat but I think most hunters rarely do when it comes to coyotes. The main benefit of coyote hunting is removing the dangerous predator from your area to protect your livestock and your neighbor’s livestock.

Due to fraud in the Utah program of people killing coyotes out of state and claiming they were killed in Utah, hunters must now take a picture of the coyote where it lays and have the location geo tagged to ensure the kill was done in Utah.

Beavers cause drainage problems by blocking the flow of rivers and streams.  In addition to the bounty paid on beavers they are also a good fatty meat and their pelts can be sold for a decent amount of money. Most beaver trappers are doing it primarily for the pelts. The state of Mississippi will pay $5 each, while some counties in Iowa will pay $50 each for Beavers killed.

Several counties in Texas offer a $5 bounty for feral hogs.  Hogs can decimate crops quickly and reproduce extremely fast.  In addition to the bounty money, which is received by turning in the hog tails, hunters are also receiving around 40 cents per pound for the meat from the hogs.

Florida has a problem with pythons invading the everglades. The largest python found in Florida so far was 17 feet long!  So far over 1,000 snakes have been removed in this pilot program.  Currently hunters are paid a minimum wage of $8.25 per hour AND receive bonuses based on size, which start at $50 for 0 – 4 foot snakes and increase $25 for each additional foot.

Bounty hunting nuisance animals probably won’t make you rich, but it could be a great side hustle to earn a few extra bucks while doing something you enjoy that is also good for the community. If you are lucky enough to live in an area where these bounties are being offered, it may be worth looking into, grab a couple game cameras

and see what nuisance animal activity is going on in your area.

What do you think about animal bounty hunting? Have you ever earned any cash turning in nuisance animals?

11 Responses to "Animal Bounty Hunting As A Side Hustle"