You are here: Home › Retirement › A Comparison of Retirement Withdrawal Strategies: What If I Retired 30 Years Ago?

Recently I’ve written a few articles that reference the Trinity study in regards to portfolio longevity and withdrawal rates.  What this study focuses on is using a set percentage for a withdrawal rate based on only the initial portfolio balance and adjusting this number for inflation, or not.  For example, a portfolio worth $500,000 with a 5% withdrawal rate would have a yearly withdrawal of $25,000 each and every year.

What I think is a much more practical retirement withdrawal strategy is using a remaining balance percentage each year. This gives the retiree extra income in good years, and requires making adjustments in down years.  I don’t have the exact data set that the Trinity study used, but I found a suitable replacement in the historical returns of the Vanguard Wellington fund.  The Wellington fund is one of Vanguards oldest funds and it is a “boring” balanced fund with a 65% domestic stock 35% domestic bond allocation. If someone only invested in this one fund and stayed in it, what would their retirement look like?  I gathered up the data from 1986 to now to show how someone who retired 30 years ago would have fared in retirement using both withdrawal strategies.

From 1986 to 2016 we went through some amazing times.  We had the advent of the internet and the dotcom boom, but we also had the dotcom bust and the great recession of 2008.  Markets were modern enough through most of this time frame that average Americans could participate in the stock market, both as individuals investors and through employer sponsored 401K plans.

One of the major rules of investing is that past performance is no indication of future results.  I am not suggesting that anyone invest solely in this one mutual fund, or that investors should expect to receive an annualized 9.9% return over 30 years, like someone who retired in 1986 would have.  This example is used solely as a data set to compare outcomes from differing withdrawal strategies.

One thing I find extremely interesting about this data set is how both the dotcom bust and the 2008 recession had a very mild effect on returns compared to an all stock portfolio, such as the Vanguard Total Stock Market Index. Here are the worst years side by side.

With no further ado,  here is the data set and core spreadsheet used for running the different scenarios.  In this spreadsheet all of the yearly returns are listed and our investor began 1986 with $600,000 invested.  This also shows what the yearly withdrawals would be using a 5% of the remaining balance retirement withdrawal strategy. 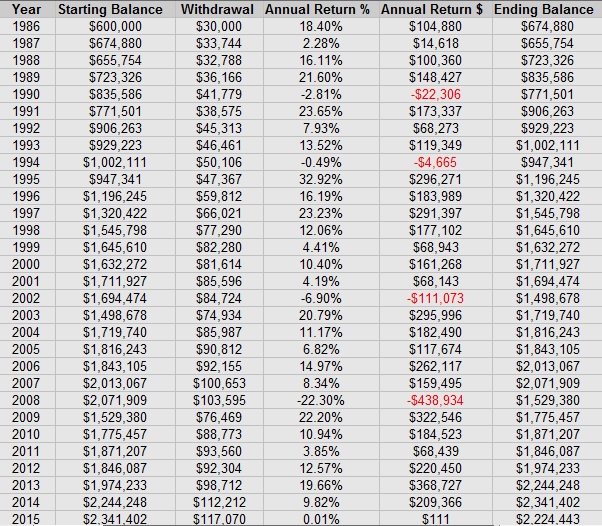 The highest median withdrawal is at 6%, anything over 6% results in the retiree ultimately receiving a smaller value of total cash flows during retirement.  A higher withdrawal rate does not always mean more money, because the more you withdrawal, the less money is left in the account to grow.

The account never goes into a negative position, the cash flows just get reduced as the balance gets lower.  Even at an insane 12% withdrawal rate, the lowest withdrawal is still $30,280 and the account has $223,000 remaining.

Only with withdrawal rates of 9% or above were there years in which the withdrawal decreased below the initial spend level.

The remaining balance of these portfolios is very low as a percentage of the original balance, because larger total dollar withdrawals are always being taken as the portfolio grows.  With this strategy you don’t leave as much to heirs, but it seems to be really good at maximizing retirement income, without generating additional risk.

This table shows how a $600,000 starting balance would fair during this time period invested solely in the Wellington fund with a constant withdrawal rate set off of the initial portfolio balance.  Because the total withdrawal dollars are constant, the lowest, median, and highest withdrawals stay the same in the table below.  Every year, the retiree takes out the exact same amount of money.

1. The ending balance on the accounts are massive.  Using a 4% withdrawal rate the portfolio balance increased by 10X during this 30 year period.  It seems kind of crazy to me to live off of $24,000 per year and then leave $6.5 Million to your heirs!  While 4% is a very conservative withdrawal rate it is recognized as the “safe withdrawal rate” by the media and most retirees.

Table 4: Percent of Remaining Balance With 50% Over Initial Withdrawal Ceiling

2.  Using this strategy the highest median withdrawal shifted from 6% to 8%.  With an 8% withdrawal the retiree’s median withdrawal was $72,000, which was also the max.  This means that for at least 15 years the withdrawal was limited by the 50% guideline.  The final column in this table details how many years the portfolio hit this max.  There is a steep drop off from 8% to 9%, going from 18 years to 4 years.

3. Every  withdrawal rate below 9% had a median withdrawal that was equal to the 50% ceiling.

With this strategy the retiree starts with a given withdrawal rate, then increases it after a certain interval of time.  In this table we increase the withdrawal rate by 1/2% every 5 years.   As time goes on the portfolio needs to last for a shorter amount of time, so taking a higher withdrawal rate in later years gives the retiree more income, but also allows the retiree to get many years of growth before taking those higher withdrawals.  Over a 30 year time period the rate would increase by 2.5% total, with year 31 bringing one more 1/2% increase. In this table we also utilized the percent of the remaining balance method.

1. The Ending balance drop between withdrawal rates is extremely large at lower withdrawal rates and much smaller at the higher withdrawal rates.  The big utility this strategy shows to me is that by living a modest lifestyle, or perhaps earning some side income during the early years of retirement allows for the portfolio to grow much more over the next 30 years.  Taking a smaller percentage withdrawal early on and then increasing later can pay off big dividends.

2.  For withdrawal rates starting at 7% the ending balance starts to get dangerously low.  In the actual calculation spreadsheets what occurs is that with such high withdrawal rates, whenever there is a bad year the portfolio doesn’t have the ability to recover.

3. This situation can be tweaked substantially to offer different results.  Perhaps increasing the withdrawal rate by 1% every 10 years would be much more beneficial, or maybe even 2% every 10 years.  Another option would be to have a low withdrawal rate for only the first 10 years, and then increase it by 3% one time in year 10.

3 Responses to "A Comparison of Retirement Withdrawal Strategies: What If I Retired 30 Years Ago?"