The cost of a daily visit to Potawatomi Zoo is less expensive than other zoos in the surrounding areas, even so, the membership offers an excellent value.  A yearly family membership is $70.  For most families this means the break even point is during the second visit.

A major bonus to getting a membership to the zoo is the reciprocal discount program.  Zoo members receive a 50% discount at hundreds of zoos in the country.  This means if we go to Binder Park Zoo we save around $36. If on our vacation to Ohio we go to the Columbus Zoo we would save over $50 on admission.

Zoo memberships are extremely helpful to both the originating zoo and to the reciprocal zoos, despite the large savings.  Most families will take a trip to the zoo once.  A membership gets the zoo paid for around 2 visits and provides a steady stream of income for the zoo.  When members come to the zoo multiple times, since admission is “free” after the second visit, they are more likely to spend more money of souvenirs, food, and experiences at the zoo.  Zoo members who would likely not go to the reciprocal zoos, either due to cost or distance are more likely to visit reciprocal zoos due to the reduced cost.  This gives the reciprocal zoos money that they would have never received otherwise. 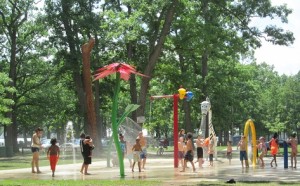 Potawatomi Zoo is a relatively small zoo by acreage.  One of the aspects of the zoo that I like is that is is adjacent to Potawatomi Park.  This park has a lot of playground equipment for the kids to play on and also has a spash pad water fountain area as well.  In general on a typical zoo visit we spend around 2 – 3 hours at the zoo and maybe an hour at the park eating lunch and playing.  The parking lot itself is fairly small and the spaces are tight. Parking is free, which is a big plus compared to several other zoos we have gone to.

The zoo is also directly across the street from a water park ran by the city of South Bend.  This water park has a large water slide and the prices are fairly low.  When our kids are all a bit bigger I can see combining our visit to the zoo with a trip to the water park. 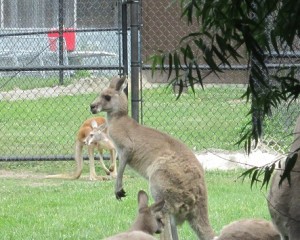 Animals: Potawatomi Zoo is home to several endangered species.  Turtles are my favorite animal and they have both Galapogos Tortoises and African Spurred Tortoises at this zoo.  They also have Amur Leopards, which are the most critically endangered big cat species on Earth, with under 100 left in the wild. 2 years ago the Amur Leopards gave birth to a set of triplets, and this summer they had a set of twins. Although Potawatomi Zoo is a small zoo, they have several big animals including Bison, Zebras, Chimpanzees, and Lions.

Railroad: The zoo has a miniature railroad that encircles half the park.  It only costs $2 to ride and is a lot of fun for the kids.  It gives them a break from walking, which is always a good thing at the zoo.

Fish feeding: A big family favorite at Potawatomi Zoo is feeding the fish in the moat that runs through the park.  There are 25 cent vending machines that dispense fish food to throw into the moat, which is filled with hundreds of fish begging for food.  The ducks occasionally jump in to get some of the action to. Too bad fishing isn’t allowed in the zoo, I don’t think you could ask for an easier way to get a fish on the line!

Petting Zoo: Kids can feed and pet the llamas, goats, and other small animals in a petting zoo area.  Yes, there is a hand washing station nearby. The kids can either pet the animals through the fence, or go into an area with the animals.

Endangered Species Carousel: The zoo recently added the endangered species carousel that sits right inside the entrance to the zoo.

Potawatomi Zoo recently published their long term master plan to cover the next 15 – 20 years at the zoo.  When I opened the document I was preparing to read a few dozen pages of legalize that would put most people to sleep, instead I became super exited at the attractions this small local zoo is planning.  Once they get the ball rolling I can see visiting Potawatomi Zoo becoming a must for most families in the Midwest.

The Boring, But Important Stuff:

Renovating and Extending the parking lot:  My primary complaint about the zoo is a lack of parking.  The zoo currently has under 100 parking spaces, although there is more public parking down the street for the neighboring park.  The master plan calls for expanding the parking lot to over 200 spaces.

The entrance and exit to the park will also be upgraded.  Currently the labelled exit is a turnstile that can not be used with a stroller, wagon, or wheelchair.  It isn’t a big deal to go the extra 50 feet and exit through the primary park entrance, but for a better flow of traffic, this is something the park needs to do.

The Master Plan is broken up into 6 phases; High Priority, Quick Success Projects, and Phases 1 – 4.  The majority of the big hitter items that get the most bang for the buck are in the quick success projects.  After hitting the highest priority items like the parking lot, the zoo wants to focus on changing a few exhibits to bring in more visitors, increase interaction with the animals, and increase revenue for the zoo.   These projects include making an interactive prairie dog exhibit with tunnels where visitors can pop up and be in the middle of the prairie dog field, a revamped bison exhibit with feeding opportunities, and a new giraffe exhibit, also with feeding opportunities.  The combined cost of these three items is estimated at just shy of $1.2 Million. My kids LOVE to go to Binder Park Zoo to feed the giraffes, and having these feeding opportunities would certainly be a big draw for kids.  I don’t know of any zoos where you can feed the bison.  Binder Park Zoo charges $1 per lettuce leaf to feed the giraffes, which is virtually 100% profit. If half of the 200,000 yearly visitors feed the Giraffes that’s $100,000 per year in added revenue, which is pretty big deal for a small zoo.

Phase 1 includes what I think will be the largest draw.  The zoo has this massive pond, which is very underutilized.  It has two tiny islands on it that house monkeys, but the master plan calls for changing this pond into the new Alligator habitat with feeding shows.  If that’s not cool enough, the zoo would also install a zip line running 450 feet across the the Alligator pond!  How cool is that! This phase is estimated to cost $625,000.  There isn’t anywhere else local where I know of that you can zip line at all, and the fact that you are doing it over the Alligator pond adds an extra level of awesomeness to it!  I can see this being a huge money maker for the zoo.

The rest of the zoo projects will include revamping several animal habitats, adding a bear exhibit, penguins, and flamingos, and adding new play areas along with a new restaurant.  I think it will take quite a bit of time for the zoo to secure the funding for the high priority and quick success projects, so these improvements are quite a ways off.  Check out the full master plan here.

The zoo is currently lobbying to have a .25% tax added to local restaurant bills.  This would bring in about $1 million annually to the zoo.  The zoo could then use this revenue source to borrow against to start work on these projects.  An Economic Impact Study shows that the implementation of the zoos master plan will bring in $343 Million of activity to the local economy, almost a 10 fold increase in the total cost of the master plan.

When it comes to taxes, I certainly think that consumption taxes are much better than income taxes and property taxes.  I also think that with the very small nature of this proposed tax it will not have a noticeable effect on consumer behaviors, which is another major factor in decided whether a tax makes sense or not.  For a $40 meal this tax will add $1 to the total bill.  I think Potawatomi Zoo is going about this the right way,  we just have to wait to see if the local residents agree on its value.

Have you visited Potawatomi Zoo? What are your thoughts on its master plan?