You are here: Home › Investing › The Secret To Becoming A Millionaire

In my personal life I am public as the owner of this blog, and most people who have known me longer than this blog has existed know of my passion for frugality, saving money, and microeconomics in general.  From time to time people ask me for advice or guidance, but the question I get the most is “What is the secret to becoming a millionaire” or some rendition of this.

Are You Ready For It? Here’s The Secret To Becoming A Millionaire:

Step 1: Save 25% of your income for 25 years and invest it in stock mutual funds.

Step 2: Look in the mirror and say, hey…you’re a freakin millionaire!

It’s really that simple.  You don’t have to have rich parents, you don’t have to earn $100K a year, or start Facebook, or invest with Madoff.  Don’t believe me?  Here’s some numbers to back this up because I like numbers..and so should you. It’s hard to get a million of them to hang out with you if you don’t like them, so always pay attention to your numbers.

Waaaahhhhhh!!! 25 years is not all that long in the story of your life, after all average life expectancy is over 80 years.  If you start saving at 25 by 50 you will be a millionaire.  50 is still pretty young to be a millionaire and you can choose to be done working.  But…if you choose to keep working and not draw on that money even without adding any new money that $1 million will grow to $2 million in 10 short years.

You still want a million bucks sooner?  Take the quarterly savings rate challenge.  What if over the next 2 years you increased your income to $80,000 and cut your expenses to $40,000 saving HALF of your income?  If you saved $40,000 a year instead of $14,250 you will hit $1 million in just 15 years.  I think going from $0 to $1 million in 15 years is pretty darn good, but you know what some people do it even faster, but the math gets tougher, and it is much more difficult to make happen because short term changes in the stock market are more likely to have an effect on your portfolio with the shorter time horizon.

Becoming A Millionaire In 10 Years:

To do this you need to get your income up.  It helps to have a 2 earner household, with both earners being college grads or at least high earners in their fields, and having no kids makes a world of difference too.  Earn $150K per year and save $67,200 per year. Yeah, it’s WAY harder to become a millionaire in 10 years than it is to do it over 25 years.

Chart: How much to save per year to be a millionaire in X amount of years with 7.2% annualized returns: I personally think the sweet spot is right around 20 – 25 years. 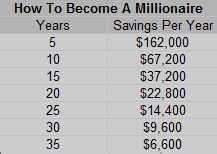 All of these projections are based off of a 7.2% annualized return, which is fairly conservative over the long term.  It’s entirely possible the returns you see could be greater, which could greatly speed up this process.  Although you can reduce your risk and potentially increase your returns over the S+P 500 through proper asset allocation, there really isn’t all that much you can do to ensure you end up with a higher rate of return, your savings rate is by FAR way more important than your investment returns.  The easiest way to get started is by setting up an account at Betterment.com

.  You can start investing with as little as $100 and are instantly diversified across a half dozen mutual funds.  Year to date my Betterment account is up 3% over the S+P 500.

Being A Millionaire Isn’t What You Think It Is:

Most millionaires don’t live in opulent houses, drive BMWs, own yachts, and spend money like there’s no tomorrow.  Most people living that lifestyle have tens, or hundreds of millions of dollars.  You walk by millionaires every day and don’t know it. For the most part if you are able to save a million dollars you are very unlikely to spend money like its nothing.  Most millionaires either don’t draw on their assets at all, or take a very small draw, around 4% – 5% per year to cover living expenses.

You can also have assets worth millions of dollars that you aren’t counting.  A retired friend of mine who doesn’t have much in savings recently told me that he receives a pension of around $2,500 per month.  To get the value of your pension, multiply the yearly amount by 25X to match a conservative 4% withdrawal rate from an investment portfolio.  My friend’s pension is worth right around $625,000.

And what about Social Security?  If you sign up for an account at SSA.gov it will show you your lifetime earnings record and a projection of your Social Security income.  The median benefit is $1,625 per month, that’s worth $487,500.  For a dual income household that’s just shy of $1 million!

I know, we like big round numbers.  they look so cool and make us feel good about ourselves, especially when they roll over that next digit. Here’s the thing.  If you are making $57K and saving $14K that means you can live of of $43K. Eventually your kids grow up and move out of the house, your house gets paid off and you no longer have to pay payroll taxes.  For someone who lives off of $43,000 per year while working, it is highly conceivable that they can live a comfortable life on $30,000 per year with no house payment, kids, or taxes.

So How Long Will It Take To Reach A Half Million?

Well, you could cut the savings rates in half in the above chart to reach $500,000 in the same number of years. That would look something like this: 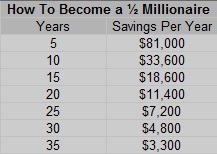 Of course every year will be different.  Very few people earn the exact same amount of money every single year, even fewer have the exact same expenses every year.  Overtime your yearly savings will increase. 10 years ago the idea that I would be able to save $1,000 a month seemed crazy to me.  This year Mrs. C. and I will save over 3 times that.

Think of it like moving dirt with a shovel if you have debt it’s a hole in the ground that needs filled and if you are trying to become a millionaire you need a really tall pile of dirt.  If you are moving dirt with a tiny shovel it will take a long time, the bigger the shovel the faster it will go.  The difference between your income and spending is the size of your shovel.  In the above example our average guy made his shovel almost 5 times bigger!

Once you have some success with cutting your expenses and increasing your income chances are you will continue to work that direction.  Our Average guy that started out at $57,000 in income and $54,150 in spending could in a few years be earning $90,000 and spending $40,000. Having a $50,000 a year shovel is a pretty darn powerful tool!

Are you on the path to Becoming A Millionaire?  Remember the first $100,000 is the hardest!  It get’s easier, just keep working on increasing the size of your shovel!

One Response to "The Secret To Becoming A Millionaire"