You are here: Home › Retirement › Should I Take a Pension or a Lump Sum: An Example In Winning

Her question was whether she should take the pension or the lump sum.  Her pension is $23,196 per year or 5.2% of the lump sum balance.   This couple already has $7,000 a month in guaranteed income (Social Security, husband’s pension), without including any income from their $3 million in assets.  It states they have 2 properties included in the $3 million net worth, but does not go into how that value is split up.  For the purpose of this conversation let’s assume $2.5 million is in investment accounts and $500,000 is in real estate that does not produce income.

Should She Take The Pension Or A Lump Sum?

Guaranteed Income is extremely attractive, but this couple already has $7,000 a month in guaranteed income, which is $84,000 a year.  This is certainly enough money to live a comfortable lifestyle, especially with no house debt, no car debt, and all children grown.  A 5% guaranteed return is a great option to look at, but the math is more complicated than that. We have to look at how long she would receive distributions from the pension.

Alternatively if she took the lump sum and kept it invested at an 8% return AND took $1,933 a month out for her income to replace the pension income at the end of 21 years not only would she have the original amount left, but it would have increased substantially.  Here is an example of 8% returns and with both the pension and the investment account adjusting 1.5% per year for a cost of living increase.  As you can see at the end of 21 years the lump sum is now worth $930,000 while the pension is worth $0 once she passes. With this example, I am very much in favor of her taking the lump sum. 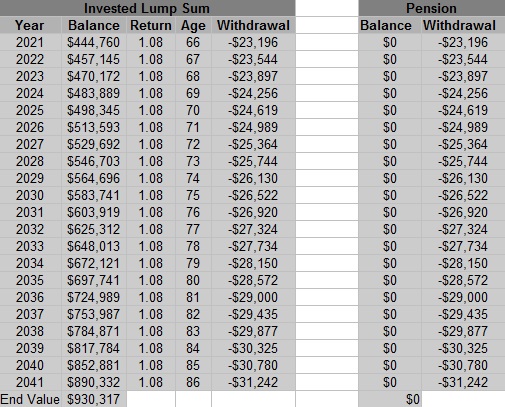 Pension funds can and do fail.  There are many examples of underfunded pension funds significantly cutting the “guaranteed pensions” of retirees. In this situation this truck driver was facing a 60% pension cut! This wasn’t an isolated incident. In Detroit Pensions were cut 4.5%, with cost of living increases taken away permanently, and the retirees also had to surrender a part of a cash balance plan and take higher health insurance costs. All of these issues stemmed from under-funding of the pension accounts.

On the individual level some pensions are written in ways were you must hit a total years of service mark, and some people lose their jobs before reaching that mark.  A great example of this was FBI deputy Director Andrew McCabe. Andrew was fired 2 days before his 50th Birthday, which prevented him from reaching the required early retirement age to be eligible for his pension.  Although it looks like he will still be able to get his pension at 57, he lost 7 years of payments and a top up formula application, which combined are worth several hundred thousand dollars. Alternatively what if you really are unhappy in your job?  A pension ties you to a job that may not be right for you because of the future “promise.” I recommend checking out the book The Golden Albatross: How To Determine If Your Pension Is Worth It

. You have to think about the risk of not making it to a certain age when planning whether to take the pension or a lump sum.

The pension has a big risk on both sides of the longevity issue.  If she only lives another 3 years, the pension is a really bad deal. She would have received $69,588 in total payments.  On the other side of the coin if she lives to be 100 the compounding of the lump sum runs away from the pension at an astonishing rate.  The average cumulative return is also much more stable over a 35 year period than a 21 year period.  Rather than ending at a $930,000 value after 21 years her lump sum would have $1.8 million after 35 years.  If she were averaging a 10% return instead of an 8% return she would have $4.8 million.

When Would It Make Sense To Take The Pension Over The Lump Sum?

There are some situations where this pension would make sense.  For example, if she were a widow, with no savings and very little Social Security income the security of the pension being guaranteed money would be worth missing out on the lump sum. For example let’s say she was single, with no retirement savings, and has a $1,200 a month Social Security check.

The $1,200 a month Social Security check doesn’t go very far.  She needs the income from the pension in order to cover basic living expenses to not be below the poverty line.  With $1,933 in pension income added to her Social Security she would have $3,133 a month in guaranteed income.  In most of the country a single person can live comfortably on that income.  She can’t afford to risk a market downturn, so the value of the steady guaranteed income is much higher.   If you absolutely need the pension income to live off of taking the pension starts to make more sense.

Alternatively, what if she knew she had a gambling problem? Or a spending problem?  This isn’t likely for someone who has accumulated $3 million in assets, but if we are looking at our 2nd example, there are a lot of people who have never managed a large lump sum of money and with their nature can not trust themselves to manage this amount of money.  There could be a very real danger of receiving the lump sum and using it to buy a nicer house, a car, and spend it on vacations and other things in the first couple years then have no money left to live on for 20 years.  For someone in this situation taking the pension makes the most sense.  It keeps the hands out of the cookie jar.

Should I take A Pension or A Lump Sum?

It all depends on your individual situation as to whether you should take a pension or a lump sum. An excellent book for helping make this decision is Pension vs. Lump Sum: 5 Crucial Questions Retirees Must Answer Before Making This Decision

.  For this couple, I would suggest the lump sum by a mile.

What do you think?