You are here: Home › Retirement › Why To Stop Contributing To A Roth IRA 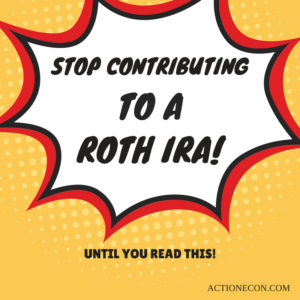 For the last 13 years I have been a major fan of the Roth IRA. When I was first introduced to it when I was 15 years old, I made a plan to become a multi-millionaire using a Roth IRA (A plan which included extraordinarily optimistic 12% annualized returns and a time span of 50 years).  I ended up not sticking 100% to that plan, but I have always maintained a “Roth First” attitude.  I was super excited when the Roth 401K came out and had hoped that one of my employers would offer it.  The biggest financial planning stars Dave Ramsey

swear by the Roth, so why am I steering away from it now? It’s all about maximizing tax efficiency. Here’s why I think it’s time to stop contributing to a Roth IRA.

The Roth does have a few nice perks.  You put in money that is already taxed, that you can take out at any time with no tax or penalty owed, and the gains are tax free, so long as they are not withdrawn until age 59 1/2.  Unlike traditional accounts, the Roth does not have a minimum withdrawal starting at age 70 1/2.

What this shows is that as long as you have ANY federal tax liability, it makes sense to contribute to traditional accounts at a rate that would build a $510,000 nest egg. Many people suggest for those in high tax brackets to contribute to a Roth because it allows them to effectively save more money using the argument that $5,500 of post tax money is worth more than $5,500 of pre-tax money. This is only true IF in retirement the person is in the same tax bracket as when he was working, otherwise saving the difference (the tax refund received for contributing to tax deferred accounts, which is usually spent instead of saved) in a taxable brokerage account will yield a greater tax efficiency.

Example: A couple in the 25% income tax bracket, contributing $5,500 per year to an IRA for 30 years, assuming 8% annualized returns.

Chart Proving Why You Should Stop Contributing to A Roth IRA

Since long term capital gains are taxed at 0% for those in the 15% tax bracket or below, the additional earnings from the taxable account, are not taxed.  Using current tax laws, the first $20,400 from the IRA would be taxed at 0%, then the next $18,150 would be taxed at 10%.  This causes the Roth to have a slight advantage over the traditional account in terms of monthly retirement income by $54, however the couple in this scenario lost a yearly $1,375 tax deduction, which is $115 a month. Thus, the traditional account was actually a better deal.

Although the numbers are not as striking for people in the 15% bracket, the math still works:

The game changer for Roth Accounts is the permanence of the Bush Tax Cuts.  Under the Bush tax cuts, long term capital gains and qualified dividends (those from stock owned for over 1 year) for taxpayers in the 15% bracket or below, are taxed at 0%.  Previously they had been taxed at 10%.

This also completely negates the benefit of a Roth IRA for people who are in the 10% or 15% tax bracket AND plan on being in the 15% bracket or below in retirement. For a married couple, this is income under $92,500 per year, which is the vast majority of households in the US. I recently set up a taxable account at Betterment because of this.

The taxable account has some key advantages over the Roth IRA.

These benefits are a major reason why it makes sense to stop contributing to a Roth IRA.  When long term capital gains went to a 0% tax bracket for those in the 15% tax bracket the major benefit of the ROTH account went away.

The reality is, the federal government can change the deal at any time for any of these accounts. Any of the following scenarios could happen that would throw a monkey wrench into any retirement planning strategy:

Charles Darwin said that “It isn’t the strongest who survive, but those who are most responsive to change.”

Where a Roth IRA Makes Sense:

Maybe you shouldn’t stop contributing to a Roth IRA after all.  Contribute everything possible to Tax deferred accounts, which give a tax break TODAY, that the government can’t take away at some point in the future. I start with contributing to a 401K enough to get the match, then max my HSA, then back to the 401K and if possible an IRA until taxable income is $0.  IF I haven’t hit the IRA cap through traditional investments, then I will fill up the Roth IRA.  If I contributed the full $11,000 to our traditional IRAs and still have money to invest, then I would put in in a taxable account.

The Roth is the best option for people who have no taxable income, or low taxable income. For people with a tax liability that can be negated by the Retirement Savers Tax Credit, the Roth is a perfect option. Since the retirement savers tax credit can yield up to a 50% tax credit per $2,000 put in retirement accounts per person, it is a great credit to balance with a Roth IRA. The credit is non-refundable. For most people receiving the credit investing the tax savings would be a challenge, although it would make a large difference in retirement.

The chart below shows an example of using a Roth IRA to get the maximum tax credit from the Retirement Savers Tax Credit by filing status. 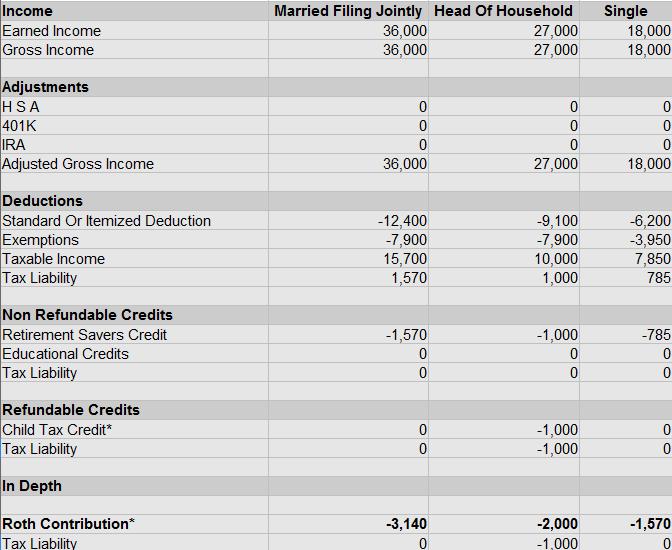 You can use my tax planning spreadsheet to test your own tax scenarios side by side.  In my opinion, the truly best time to contribute to a Roth IRA is as a teenager and young adult when you are likely to have no tax liability at all, then switch to the above strategy of tax deferred investing first.  Ideally, over time, every earner should want to have money in all 3 account types.  The reasoning for this is that the tax treatment can be changed at any point in time by congress.  Assuming 8% returns, if someone contributed $5,500 per year to a Roth IRA, from age 16 to age 21, by age 59, he or she would have around $750,000.  Then from age 22, through his or her working career, contributed to traditional and taxable accounts as outlined above, would result in a very comfortable and tax efficient retirement.

What are your thoughts on the Roth IRA? Does the current 0% tax bracket on capital gains for those in the 15% bracket or below affect your decision making on using a Roth? Do you think you should stop contributing to a Roth IRA?

One Response to "Why To Stop Contributing To A Roth IRA"