You are here: Home › Legacy › Make Your Child A Millionaire (100 times over)!

You can take action to make your child a millionaire, and it really isn’t that hard!  It’s way easier to assist your child in getting to millionaire status than it is to get yourself there.  Why?  Because they have a lot more time for compounding, have no expenses, and have amazing tax breaks!  Two of my recent articles focused on the basic premise that hiring your children in your small business (that you can start for this expressed purpose) is the best method for building generational wealth. Because growth is exponential through compounding gains starting earlier results in vast differences in total lifetime wealth built.  I focused mainly on the arguments of tax shifting and maximizing Roth IRA contributions.

Children can earn up to $12,550 without having to pay any federal income tax and as employees in their parents business don’t have to pay Social Security or Medicare tax either.  With earned income they can contribute to a Roth IRA, which allows for tax free compounding.  Using this strategy starting at age 10 and assuming 10% returns, a child employee working until 18 would build around $75,000 of wealth by 18 and with no additional contributions would have roughly $1 million at 45 and over $6 million at 65.  This would make their financial lives fairly comfortable, but I was wondering what could we do to super size this concept? Also note, that this is perfectly legal and encouraged by our federal government.

Make Your Child A Millionaire 100 Times Over:

If a child is employed starting at birth rather than waiting until age 10, a lot more compounding can occur.  What jobs can a newborn do?  Modeling is the most likely to pass muster.  Use images of your child in promotional materials for your business.  By age 5 they could transition to a photographer and certainly by 6 they can do a good chunk of manual labor jobs, data entry, package fulfilment, or virtually anything that doesn’t require advanced skills.

If we start the compounding interest calculator in the first year of their life and stop on their 18th birthday, with them only earning $6,000 per year to fully fund their Roth IRAs at age 18 they should have roughly $300,000.  This is 4 times greater than the earlier example of starting at age 10.  If they continued saving $6,000 per year the portfolio would cross $1 million at 29, and by 65 would be over $35 million! 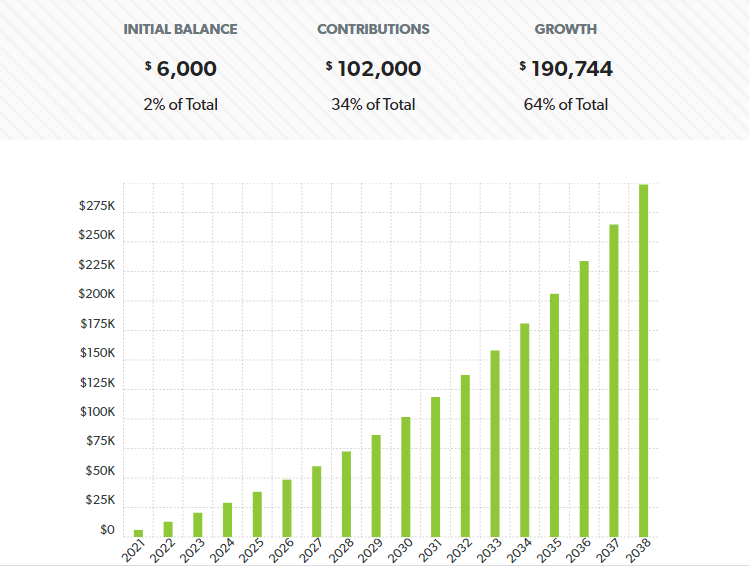 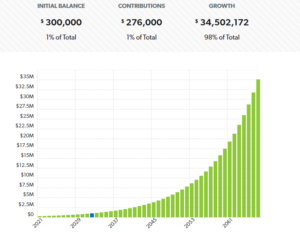 Make Your Child A Millionaire: Invest In Individual Stocks:

Since these children are investing early in life they have a long time before they need this money, therefore they can take on more risk than the average portfolio of someone in their 30s or 40s who just started investing.  10% is often used as a marker for stock market mutual fund returns.  By investing at least half of the money in individual stocks it is not unreasonable to assume they could average closer to a 12% return, or even a 15% return over a 10% return.  Beating the market as an individual investor is not as difficult as the finance world wants you to think.  By assuming 12% compounded returns the portfolio would have $375,000 at 18, $1 million at 26, and $116 million at 65. It’s amazing that 2% can change the end result from $35 million to $116 million!

The examples above were based on earnings of only $6,000 per year.  They can earn over twice this and still pay no income taxes and no Social Security taxes.  Let’s say they earn $12,550 per year to maximize the 0% federal tax bracket.  The first $6,000 goes into a Roth IRA and the next $6,000 goes into a taxable brokerage account. The remaining $550 would pay state income taxes.

At 18 they would get a normal job and have access to a Roth 401K.  Every year they could sell assets in their taxable account and move them into Roth accounts to avoid taxation in the future.  Utilizing the lower long term capital gains tax rate while having a relatively low income would make this possible. This is why a taxable account isn’t so bad, the money can eventually be changed into Roth money.

Ok, so in the last example, the kids paid no income tax on their earnings and ended up with $233 million at 65, not bad right?  Let’s enter the world of the super rich.  In the earlier examples it is reasonably achievable for a small business to earn this much money and for a child to provide this much value.

If we make some assumptions and are OK with our children paying some income taxes, these numbers can get even crazier.  Let’s say we want to take advantage of the low tax rates and have our children earn enough money to fill up the 12% tax bracket.  This would mean earnings of $53,075 per year.  They would pay $4,664 in federal income taxes, resulting in a net income of $48,411 in income.  Presumably at this level state income taxes become significant as well.  Subtracting 5% for state income taxes leaves us with $45,990 in income.

How can a child’s labor be worth this? Well there are numerous factors that go into determining that.  If you child model is in a picture on every blog article you make and the blog is earning $200,000 in gross revenue, it’s not outrageous; likewise if your little photographer took all the pictures.  If your fulfillment assistant worked 4 hours after school, 8 hours each day on the weekends and 50 hours a week in the summer, it’s not outrageous.  There are many children who earn far more than $50K a year.  Of course most children don’t but enough do that it isn’t outrageous to believe it can happen.

I used extreme examples to show that anywhere in the middle is possible and we can do a lot better than we have been with setting our children up for success.  Yeah, right now getting to $12,550 per kid, or even $6,000 per kid may seem impossible, but give it a start at $1,000 per year and build from there.  If the business proves to be successful it won’t take long to scale.

For someone who has been a finance blogger for the better part of a decade and obsessed with personal finance for my entire life, I’m surprised and disappointed that I’m just now figuring this out.  My kids are 17, 12, 9, and 7. We are in the process of starting our family business. It is never too late.  Because our oldest is going to be 18 soon, a lot of this advantage is lost, so we will most likely concentrate on Roth IRA matching for him once he gets a real job later this year.

For the younger kids we will employ all of them in the family business.  Going forward a generation one option we can do once we have grandchildren is turn their parents into independent contractors. The IRS doesn’t allow for grandchildren to be employed directly and be exempt from payroll taxes (and child labor laws).  Rather than having our kids or grandkids as W2 employees we would have our kids be independent contractors and issue them a 1099.  They would report the 1099 income on their 1040 form C and could hire their kids to work in their business.

To draw this example out further.  Mrs. C. and I run “Action Econ Books”.  With our kids being under 18 we employ them as W2 employees and they pay no payroll taxes. We source used books and resell them using Amazon FBA.  When they are grown and have their own children, and probably W2 jobs in the private sector, they continue to do some amount of work for our business.

Let’s say Kid #1 works a full time job but runs “Kid Alpha Bookstore” on the side. He goes to source books at thrift stores and library sales with his kids and then wholesales the books he finds to “Action Econ Books” for a set fixed price per book.  I issue him a 1099.  From the revenue he gains selling me the books, he pays for all the inventory he bought and hires his kids as W2 employees of “Kid Alpha Bookstore”.  Now our grandkids are able to start employment much earlier than our kids did.  Of course he could also have “Kid Alpha books” become an Amazon FBA store and run the whole thing himself, rather than going through us, however that would require a higher dedication of his time.  Now for this particular business model, employing a kid under 5 would be difficult because the tasks available are not really in that range. I think a 5 year old can click a button while pointing a laser at a barcode and if its green put in in the kart and if its red move on.  While starting at 5 isn’t as advantageous as starting at birth, it is still way better than starting at 18. This setup allows the same business to benefit a 3rd generation.

Over the next several years I am sure I will work with my older kids on finding the right formula for their lives to to be able to start a business to employ their kids at birth rather than waiting to 5. On a big picture note, I love that this is the type of problem I’m trying to solve.  Making my children millionaires, starting the right business for my unborn grandchildren to be able to open Roth IRAs, which they likely won’t use until their 60s and will be able to pass on as inherited Roth IRAs to their grandchildren or great grandchildren.  just 12 years ago I was trying to solve the problem of how to pay the electric bill next month.  “Go as far as you can see, when you get there, you will be able to see further!”

What do you think about employing your children in order to fund their Roth IRAs?  Isn’t compounding interest amazing?