I just came across this article entitled “Is 70 the new retirement age?” and I imagined that it would be an article focused on baby boomers who didn’t save any money or on people who love their jobs and don’t plan to retire until they are essentially forced out. It turns out that neither of these assumptions were true.  When I delved into the article I read that 25% of workers under 30, 28% of workers in their 30s, and 33% of workers in their 40s think they won’t be able to retire until after 70. WHAT?  I could see people in their 50s and 60s who hadn’t saved anything thinking this, but people this young have several decades to change direction, why on Earth would they think they can’t retire until 70?

Worse yet, only 2% of workers thought they could retire by age 55.  Admittedly, I’m in a bubble;  I’ve had a goal of retiring early since I was 16.  I view retiring at 55 to be a normal retirement age, and anything before 50 to be “early”.  My goal is to retire by 45, but my stretch goal is to hit financial independence before 40.  Other financial bloggers make up a lot of my social circle, so I understand that my viewpoint on this is skewed somewhat.  I just couldn’t imagine thinking I would have to work until 70.  Do you think you will have to work until 70? 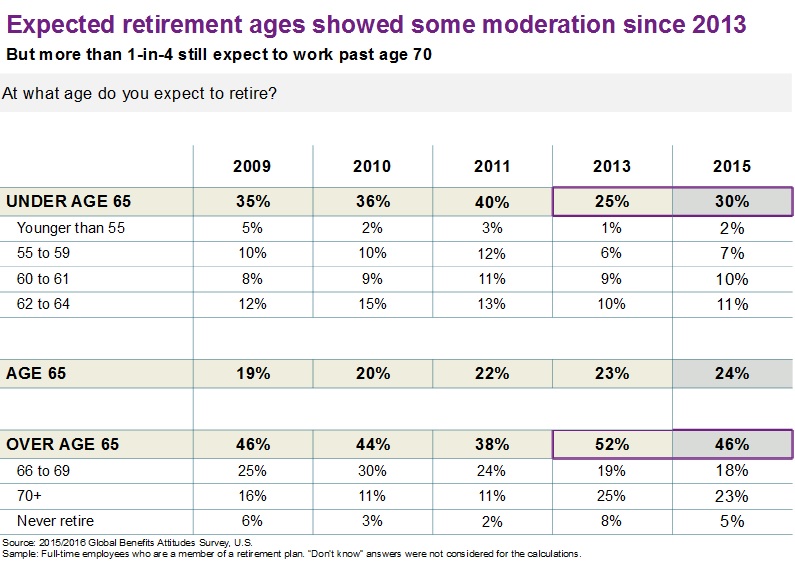 I think this could be a big part of the problem with so many people not thinking they can retire until 70.  The VAST majority of these people I’m sure have not ran the numbers.  They probably are heavily reliant on Social Security and think they will need the delayed Social Security credits in order to have enough money to retire.

Let’s assume the average person in this study is 35, has $0 in savings and earns $40,000 a year.  Let’s also assume that this person needs 75% of his before retirement income to live of of in retirement, this is $30,000 per year. This reduction accounts for having a paid off home, having grown children, and no longer saving for retirement or paying income taxes. $30,000 per year is $2,500 per month.

Retiring at age 62 instead of age 70 is a drastic change.  That’s 8 more years of not having to work, which is a pretty big deal. 70% of survey respondents said they don’t expect to retire until age 65 or later.

Retiring at 55 when already 35 and starting from a $0 net worth is not as easily done.  Bob would not see Social Security income until age 62, so for the first 7 years of retirement Bob would need extra savings.  There are two ways to calculate this out; with Social Security and without Social Security.

Now what if Bob started saving at 25 instead of 35?

Don’t believe doom and gloom.  The newspapers, the magazine articles, the federal government, your employer, your friends, your parents, and even the internet don’t get to determine when or how you retire, YOU DO.

I just demonstrated how someone earning a modest wage and never receiving a raise, could save 12.5% of his income starting at age 25 and still retire by 55…And that doesn’t even include Social Security!

Live below your means, save early, challenge yourself to earn more and spend less every year, save and invest the difference, and you can easily be part of the 2% planning to retire before 55.  I’m part of that 2%  will you be?