After 10 years of being a parent it seems that the more money spent on toys, the less enjoyment is had from them.  There have been several times where we have purchased the coolest toy in the world that costs over a hundred bucks, and after a few days it sits idle (Spike the Dinosaur, I’m looking in your direction!).  Today is my youngest sons birthday and we will be having a fun time, and we certainly didn’t break the bank. 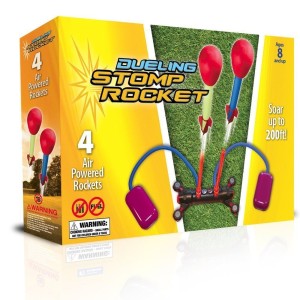 We spent around $50 on presents for him, but the coolest toy he received for his birthday was the Dueling Stomp Rocket Kit.  Last year my parents got the single version of this for the kids and they loved it.  All this thing is is cheap plastic and Styrofoam, but it shoots rockets well over 100 feet in the air and they have a good time with it.  After a couple launches I build a new platform for it and this toy has probably seen a hundred hours of use since then.  For his birthday my parents sent this new model which has a stronger base and allows both kids to play at the same time.  Amazon currently has a really good deal on this, $16 instead of the normal $40 retail price.

Flicks Family Film Fest: Our local theater chain, Celebration Cinema plays just out of theater kids movies at a special price twice a year.  Kids are free and adult tickets are $5.  This season, which starts today, lasts until the end of October.  The movie changes every week, this seasons lineup includes: The Nut Job, Muppets Most Wanted, The Lego Movie, Mr. Peabody and Sherman, Rio 2, Legends of Oz, How to Train Your Dragon 2, Earth to Echo, and Maleficent. $10 for a family movie night is quite the deal. We will either go to see the Nut Job for his birthday or use the free tickets to the Ninja Turtles movie that Mrs. C. won earlier this month.

Water Fights: Over the years I have collected a serious arsenal of water guns, less than 50, but more than 30 ;).  I got all of these from yard sales, thrift stores, and even a couple from craigslist and ebay.  Most of these are from the peak of water gun design in the late 90s when the CPS (constant pressure system) Super Soakers were designed.  In addition to all the Super Soakers, we also have 4 different outside spigots to allow for a spread out war. All we need now are some Bunch O Balloons! Water fights have become a major part of our summer birthday celebrations. As the kids get bigger I think these will become even more fun.  I do think its ridiculous that they changed water gun designs to get rid of the built up pressure functions :(.

The Cake: Sadly I don’t win on this front. I think for the most part professionally made cakes are a waste of money.  I would much rather spend a couple bucks making a cake and put on our own 50 cent toys then pay $30 for a store bought cake.  It won’t be too long before our kids get tired of cartoon featured cakes; I know our little guy will appreciate a Jake the Pirate cake. In the scheme of things $30 per birthday cake isn’t that big a deal. (Unless you run the math across 6 kids for 12 years each and get over $2,000!)

What He Wanted and Didn’t Get: His  three front teeth! Two years ago his three front teeth were knocked out in a trampoline incident in which his brothers head collided with his face.  Needless to say we made a one at a time rule for the trampoline going forward. We eventually got rid of the trampoline to avoid any more injuries.  Hopefully they come in soon!

For the most part I think fun activities are more important than presents.  On your kids birthdays do you spend more time and money on toys, or on activities?