From time to time people ask me what I think about investing in gold.  I usually say the same thing: Buying gold is not investing, it is protecting a store of value.  Investing is when you put money into something that has action going on to generate money.  Buying stocks is ownership in companies that produce goods and services and earn revenue.  Buying bonds is investing in governments and companies that are going to pay you interest in order to complete an expensive project. Gold is a piece of metal that sits in a box.  While your bonds may earn interest and your stocks may earn dividends, your brick of gold will still be the same brick of gold, it will not generate anything.  1 oz of gold today will still be 1 oz of gold 50 years from now.

My Viewpoint on Gold As An Investment

I personally believe that in a matchup of gold vs. stock market, the stock market is the way to go. I see having a small amount of physical gold

and silver as a good compliment to cash as part of an emergency fund.  This should overall be an extremely small part of an overall portfolio. Gold is often purchased as a hedge against interest rate risk with a bond portfolio. The gold itself is not the investment though.  My personal beliefs on investments don’t mean much if I don’t have numbers to back it up.  Thankfully me and spreadsheets get along pretty darn well and I was able to run some numbers to reinforce my position.

Gold Vs. Stock Market; By The Numbers:

The price of gold, and other precious metals for that matter, fluctuates greatly due to multiple market forces, including industrial need for the metal, government monetary policy, and speculation.  Over the last 8 years gold has fluctuated a lot and had a large run up during the stock market collapse in 2008/2009.  People often look in hindsight at this and say that they SHOULD have just invested in gold and they would have made a killing.  This is far from the truth.  Last year I compared three situations of how different investors handled the stock market crash of 2008/2009.  The individual who kept investing ended up far ahead of those who saved their money in cash and those who stopped investing all together.  But what if someone had invested in gold during this entire time period?  I have analyzed gold prices against the stock market from June of 2008 to June of 2015 with the following results:

Two investors started June of 2008 with 1,500 shares of Vanguard Total Stock Market Index Fund valued at $34.16 per share for a total value of around $51,000.   As the market begins to dip Investor A decides that no matter what happens he will continue to ride the market out and invest his monthly $500 into the fund. Investor B decides to sell all 1500 shares and purchase gold.  He will then spend his $500 each month buying more gold. 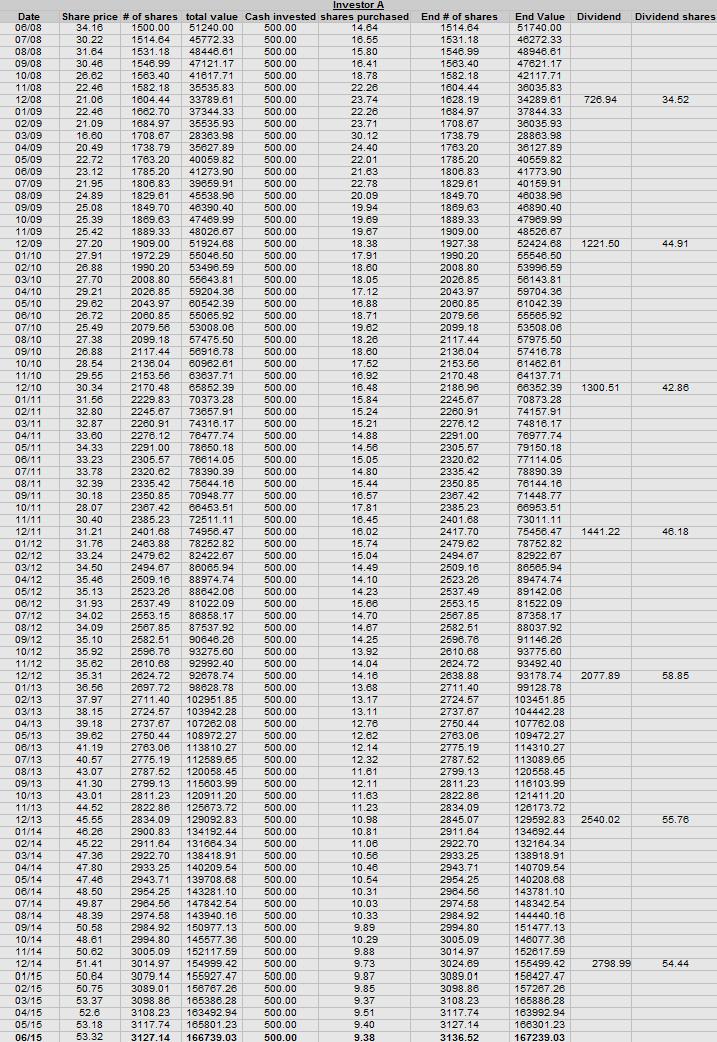 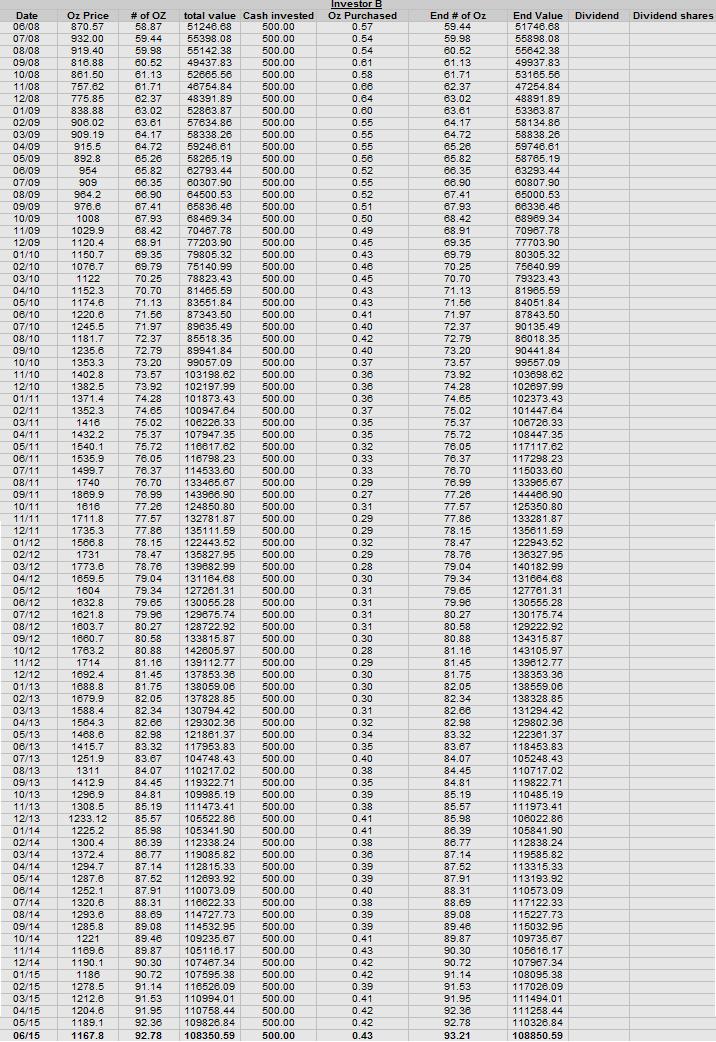 What’s more is that investor A is better protected against the next downturn.  by continuing to buy during a down market, dollar cost averaging has driven his average share purchase price to $29.89, a price not seen since October of 2011. Meanwhile even though dollar cost averaging helped Investor B as well, since most of his time buying was during a speculative run up of the gold market, his average cost per ounce ends up at $1005.69,  still much better than the average price during the 7  year period, but when compared to today’s price isn’t nearly as low as the relative CPS of Investor A.

The big difference in cost per share comes from the dividends acquired by Investor A.  Since gold doesn’t earn any dividends, Investor B was not able to make any headway through dividends.  Every year the index fund issued around a 2% dividend.  Over 7 years by reinvesting dividends this added up for our investor to 337 shares.  Without re-investing dividends his CPS would be $33.49. As of June of 2015 his stock purchased with dividends is worth $17,968.

Some people may suggest that I should include the share price that the dividends were purchased with in this chart, since it is not required to reinvest dividends. In order to make an even comparison between the gold and stocks I wanted all parts of the investments to stay together with an initial investment of $51,240 and subsequent investments of $500 per month. To get these dividends Investor A didn’t have to put up any more cash, so for the purpose of this comparison, the price at which dividend shares were purchased was effectively $0.

One of the problems with gold is that if you want to buy physical gold, you will have to pay a premium above the “spot” price in order to obtain it.  While I am writing this, the spot price of gold is $1,090. A 1 oz gold eagle coin

is $1,180, almost $100, or 8.25% over spot. Gold can also only be bought in certain denominations.  While every cent you have can be invested in fractional shares of stocks,  the smallest gold denomination you can buy readily on the open market is 1/10 oz gold coins

. A 1/10 oz gold eagle coin costs $126.15, this is 15% above spot price.The smaller denomination, the more of a premium you have to pay for it.  In the above chart for investor B, we assumed he was investing in a gold fund, such as SPDR Gold (GLD). If Investor B decided he wanted physical gold and paid an 8.25% premium for his initial investment and then a 15% premium for all subsequent investments to buy 1/10 oz coins, he would have paid a total of $10,609, cutting his value down to $98,241.

Chances are that if he was storing between 58 and 88 ounces of gold in his home, Investor B would also want to protect it, after all that is a LOT of money.  A large home safe

Gold has a small place in all portfolios, but is far too volatile to be the vast majority of a nest egg.  On average recommendations vary from 1% to 4% of a portfolio to have in precious metals. Unless you are preparing for an end of the world situation, in which food, medical supplies, ammo, alcohol, and perhaps a bunker would be far more valuable than a shiny metal, then having gold as a large portion of your net worth isn’t advisable.