You are here: Home › Misc. › Building The Alcan Highway

During World War 2 there was growing concern that America’s enemies (namely Japan) would attack North America through Alaska.  Coastal Alaska is a long way from the mainland United States and moving troops and equipment efficiently to Alaska just wasn’t possible.  A plan was developed to build a highway connecting Dawson Creek, BC with Alaska to properly supply our bases in Alaska. This highway was composed of over 1,700 miles and was build in the harshest conditions in under a year with about 10,000 men.  My great grandfather was one of them. Recently my great grandmother shared some pictures he brought home with him from his days working on the Alcan Highway in Alaska, this sparked my interest in this amazing project that was delivered ahead of schedule and under budget.

Actual construction started on March 8, 1942 and was completed on October 28 1942.  A span of under 8 months! Much of this success was due to the structure of the project, instead of having all the efforts start at the southern end and work up, The Army Corp of Engineers split into 7 groups and each group had different starting points, these groups worked their ways towards each others, with surveyors working only a few miles ahead to chart the path. At times the pace of the work averaged 8 miles a day for the road crews. 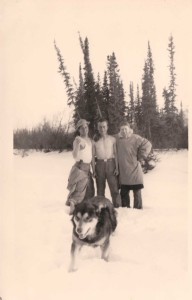 Conditions: Despite my great grandfather hanging out shirtless in this picture, I assure you the weather was challenging.  They ran into extreme negative temperatures, often had inadequate clothing, had issues with mosquitoes and inadequate shelter.  Many of the workers on the Alcan highway were black men from southern states, following the 1940 Selective service act which drafted black men under the same terms as white men.  Most of these men had never experienced a harsh winter and adjusting to an Alaskan winter was a major change.  These troops also received machines and supplies of a lower quality.  Can you imagine living in Mississippi all your life then spending a year fighting an Alaskan winter, having to work outside long hours every day?

Clearing trees: I believe this image is part of the Alcan highway project.  they didn’t waste all the trees that were cut down, many were sent down river to become lumber.  Can you imagine falling in that river?  This image looks to be much more tame than some of the older logging images of log runners who keep the logs from jamming up in the rivers on their way to the mills. The lumber harvested while clearing the roads was also used to build the bridges over the many creeks and rivers that spanned the distance of the Alcan Highway. 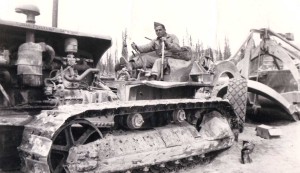 Heavy Equipment: They used a ton of heavy equipment to build these roads,  one of the major problems encountered was muskeg.  When they cleared a section of ground, causing the permafrost to thaw, they were stuck with a muddy mess, that often ensnared the machines.  Can you imagine trying to pull this tractor out of 4 feet of mud?

Food: Shipping to the work crews was not an easy task, so much of the food was provided by the men through hunting. There are several videos that you may catch on a history channel documentary showing how much of the wildlife had little to no fear of humans.  I remember seeing one clip where the crew had “adopted” a bear as a pet.  This bear was not so lucky. Simple to prepare and self stable items like pancakes and chile con carne were the predominate staples for the men working on this project. 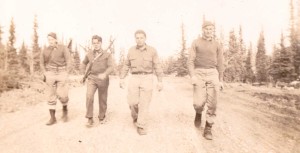 Final Result: The original road was not passable for most vehicles, or drivers. There were many switchbacks, few guardrails, and seasonal changes caused bridges to wash away.  The major fact is that the road existed and supply trucks could get to the troops stationed in the far reaches of Alaska.  improvements were made to it continuously after the initial construction was complete. Today the entire roadway is paved and just as safe as any other highway in the area for civilian motorists.

The total cost for the construction of the highway during the war came to $138 million, or around $81,000 a mile, which would put a $2 billion price tag on the endeavor in today’s dollars. Although it sounds like a lot, in the grand scheme of the total war costs, this was only a drop in the bucket. The men working on the project earned standard military pay rates, which at the time started at $50 a month, the equivalent of $750 per month today. I guess one advantage these guys had is that they were in the middle of no where. They had little opportunity to spend any of their wages, talk about an automatic savings plan!  For more information check out these more thorough resources on the Alcan Highway:

Alaska Highway: The Biggest And Hardest Job Since The Panama Canal

The Road To Civil Rights: The Alaska Highway

Do you have any relatives who have worked on a major project like this? Do you think it would be an interesting job to be on?

2 Responses to "Building The Alcan Highway"