You are here: Home › Employment › Always Fight For Your Employee Benefits 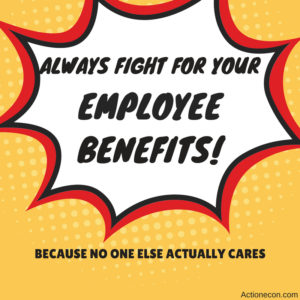 Employee benefits vary wildly between employers and even between roles at the same employer.  There are often many ridiculous rules and caveats that turn these benefits programs into labyrinths with surprises around every corner.  It is extremely important to take the drivers seat and always fight for your employee benefits because honestly, no one else in the organization gives a damn about whether you get your benefits or not. You could easily be leaving thousands of dollars on the table every year if you don’t take ownership of your employee benefits program.  Here’s a story that took place with Mrs. C’s employer that took place over the last few years that shows exactly what I’m talking about.

In 2015 Mrs. C. left an employer to go work for a competitor.  In her interview the store manager explained that she would get a 401K with a match and a few other employee benefits as well.  After she accepted the offer and had been working for the new company for a few weeks she found out that her store manager was incorrect and part time employees no longer are offered a 401K.

Fast forward til about March of last year, and Mrs. C. overhears a part time co-worker complaining about 401K contributions being pulled from her check.  After talking with management she is told that part time employees DO receive a 401K, but they have to work 1,000 hours in 1 year based on their hire date.  At this point she had been averaging just under 1,000 hours per year, so she was barely missing this employee benefit.  Had she known this was the case, she would have gotten her 401K during her first year.  There is no way she could hit 1,000 hours given how close she was to her hire date at the time, so at least we knew what needed to be done and could plan on hitting it and getting a 401K midway through 2018.

In December of last year Mrs. C. brought home a Calendar her employer issues along with a bunch of benefits paperwork.  In the paperwork it explained that you have to hit 1,000 hours in your first year hire date to hire date and after that first year eligibility is determined based on the calendar year.  It’s December. We look at her pay stubs and for pay received in 2017 and projected based on her schedule she would hit 970 hours.  With 2 weeks remaining to hit it with a paycheck issued in 2017 she asked her store manager if he could help her out and he approved her to work overtime.  She then called HR multiple times to verify the hours it shows in their system.  Somehow there was a discrepancy between her pay stubs and their records of 2 hours. To err on the side of caution she worked an extra 2 hours over their records for 1002-1004 total hours.  Here’s where it gets fun.

January rolls around and she doesn’t receive paperwork.  She calls her HR department and they tell her its T. Rowe Price’s problem.  T. Rowe Price looks up her employee ID and tells her that her account is still considered inactive and needs approval from her employer.  She calls HR several times and gets escalated to HR management.  HR management tells her that she did NOT work 1,000 hours, but the manager can’t tell her how many total hours she worked.  The hours are NOT based on pay received in the year, but on the actual hours worked for each individual day.  Since the HR Benefits manager can not look up the hours worked, Mrs. C. needs to figure this out on her own, but the HR manager re-assures her that she does not qualify for this year.

After the HR Benefits manager called her and told her she was ineligible she went to her store and looked up her hours worked in the system with her store manager…..which showed her total hours at 1,020.98. Bottom line, the HR manager was wrong and no matter how you look at the numbers Mrs C. had exceeded the 1,000 hour mark.

So Why Is This A Big Deal?

We need to maximize our tax deferred savings to avoid falling off an Obamacare cliff at 200% of FPL.  We can max our IRAs to $11,000, but neither of us have a full time job that offers a 401K.  I have an employer that offers a 401K but I only work for them for January through April of this year.  It’s tough to estimate our income for the year because it is highly variable.  Her having access to a 401K would give us the ability to contribute 75% of her pay in later months of the year to ensure we can be under 200% of FPL.  Beyond this being an Obamacare cliff it is also a cliff for the CHIPS healthcare system.  Currently our kids are covered through this program and will fall out of coverage if we are over 200% of FPL.

It took another 2 weeks, several phone calls, and faxing in a record of her hours to HR before she was able to finally get her 401K set up,  3 full months into the new year.

This is just one story of a employee benefits program not understood or executed well by both local management and corporate management. This is a lesson to constantly challenge management to ensure you receive the benefits you are supposed to receive.  401K eligibility is pretty big deal, but so is health insurance, vacation days, and disability insurance.  Direct managers often don’t know everything they should know about an employees benefits and even HR managers at the corporate level can be incorrect or working off of incorrect data.  Ultimately the burden is on you, the worker, to set things right when there is a problem, just be prepared for a fight.

Have you ever missed out on employer benefits because a manager (or two or three) gave you the wrong information?

2 Responses to "Always Fight For Your Employee Benefits"