I am not a big sports fan, I don’t follow any teams, but I do find the economics of sports to be highly interesting.  Earlier this week Floyd Mayweather tweeted that he made 32 million in 36 minutes and pending results of the Pay Per View take, may earn $70 million total for that 36 minutes of work. 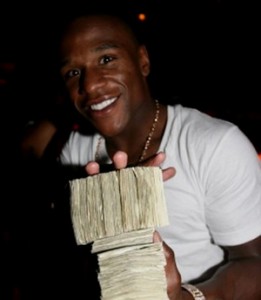 Although this is an amazing amount of money, he didn’t earn it all on Saturday night.  He started boxing as a kid, he put in thousands of hours of training and  focused development long before he made his first dime.  He fought as an amateur and after four more years of hard work turned pro. He won $150,000 in his 18th fight as a pro when he won his title.  He trained more, he fought more. He travelled from home to go to fights. Every win increased his rank, and therefore his pay.   My point is that TODAY he earned $1 million a minute, but to get there he had to earn $0 an hour for tens of thousands of hours. Being a professional athlete, like many careers, requires a large base of time, effort, and discipline put in long before the big bucks start flowing.

Years ago I met a professional boxer named Courtney Burton.  He had a string of bad fights and went from being one of the top ranked boxers in his weight class to cooking chicken with me at KFC.  Looking at his stats, his career greatly mimicked that of Mayweather early on.  Here is a comparison:

The Silver gloves are a younger division than the golden gloves. In 1996 these men were at the same point in their careers. They both put in tens of thousands of hours of hard work and were the best in their respective ages and weight classes.  In 1996 both men turned pro and won their first fight.  Burton then took a leave from boxing to go back to school.  He took a tradeoff in his prime boxing years and missed 3 years.  By the time he returned to boxing in 1999 Mayweather had already earned his first title and was making over $100,000 a fight.  Burton won his next 14 fights. He lost one fight, then won his next two and in 2003 beat Angel Manfredy, greatly increasing his ranking.  After winning this fight he even called out Floyd Mayweather to fight him, but that fight never took place.  At this point in time Mayweather was exceeding $1 million a fight. Courtney then won his first professional title, the WBO NABO lightweight title against Francisco Lorenzo.

Both men were champions, but took different paths.  Burton then had a string of bad fights, and exited boxing. Courtney made some decent paydays, but he never saw the 7 figure paydays that Mayweather enjoys.  Would things have been different if Burton hadn’t dropped out for 3 years in his prime?   In 2011 Burton started working at First Chance Boxing Inc in Benton Harbor MI as a coach and mentor for area kids.

The reason Mayweather is able to earn what he does is because not only was he able to build the base of hard work and time put in in his early days, he has been able to stay on top for 2 decades.  These sports take a massive physical and emotional tole on people.  Here is an excellent info graphic on Mayweather’s boxing career.  Mayweather also is extremely smart when making his deals.  His contracts are set up so that when he fights, the lions share of earnings go to him.  To me this makes a lot of sense, and of course he would not be in the position to demand such things if he weren’t at the top of his game for so many years.

Do these athlete’s deserve to earn hundreds of millions of dollars? We as a society decide to pay hundreds of millions of dollars to watch these men fight, and I think it’s only fitting when they get a large percentage of it, they are providing the entertainment and we are paying good money for it.  With that being said I don’t pay for professional sports channels, or merchandise, and certainly not for $75 pay per view fights.  Of course Mayweather only gets to keep a small percentage of the fight income he makes. His effective tax rate on a $70 million win is well over 50% when you include federal income tax and self employment tax.  He also has to pay managers, promoters, and trainers, so with a $70 million payday he may only end up seeing $25 million to $30 million.

Mayweather is the highest paid athlete in sports right now, what do you think about the large paydays professional athlete’s receive?

Update: While researching Muhammad Ali, I just found out that Mayweather earned more in this one fight than Ali did as a boxer in his lifetime,  crazy!