You are here: Home › Insurance › What To Do If A Nuclear Strike Occurs

Last month residents of Hawaii received a text message stating that there were incoming ballistic missiles and to seek shelter. A lot of panic ensued.  For 38 minutes residents of Hawaii believed they were under attack until the government realized a mistake had been made and a “wrong button” pushed.  In those 38 minutes people ran for any shelter they could, there is even video of children being lowered into sewers, which by the way are not by any means bomb shelters.  This could have turned deadly, as there was no atmospheric testing done on the sewers that people were being lowered into.  Can you imagine if you lowered your child into a sewer to protect them from an incoming ballistic missile and then your child died from inhaling toxic gas then to find out that the alert was a mistake?  What would you do right now if you received a text telling you that the nation was under attack and ballistic missiles were headed towards your location?

This is a wake up call that the United States for all its wealth, power, and status, is woefully unprepared for a serious military threat.  We are the most likely country on Earth to be attacked with nuclear weapons, as North Korea rattles its saber at us constantly and our “frienemies” Russia and China undoubtedly have thousands of nuclear warheads pointed at us right now.  So really where would you go if there was an impending threat?  Do you have a shelter in your house or apartment building?  What about somewhere in your community?  is there a tunnel that can protect against the blast and nuclear fallout around you?  Most likely not.

What Is Needed To Survive Fallout From A Nuclear Strike:

While a direct hit from a nuclear bomb will vaporize those within a few mile radius, the majority of people outside this radius face an insidious threat from radioactive fallout.  To protect from radiation you need to have mass between you and the source.  In radiation protection materials are rated by “halving thickness” which is the amount of material needed to cut the outside radiation in half. Here’s a list of halving thicknesses of common material:

Time:  The most crucial time is the first 48 hours after the blast, but ideally people would remain in the shelter for 2 weeks and then continue to stay in the shelter for the next several weeks, only taking occasional trips outside for resupply and exercise.

Sweden and Switzerland are the two main countries to look at.  Both countries have required new construction to build such shelters in every new building for decades. To be fair, both are much smaller countries.  Switzerland has a population of 8.3 million people and Sweden has a population of 9.9 million people. Both countries also have large installations built by the governments to protect it’s citizens.  The Sonenberg tunnel for example is designed to protect 20,000 people. Overall both countries have hardened fallout shelters capable of housing their entire populations.

What Would It Cost To Prepare The Country For A Nuclear Strike?

This year our country is going to spend $700 BILLION on “defense”.  In 2016 we spent $611 Billion.  This is almost 3 times what the next country on the list spends and is more than the next 8 countries combined.  We are building aircraft carriers that cost $10 billion a piece while we already have 19 in service.  Other country’s have far fewer.  France and Japan have 4 each, India has 3, The UK, Italy, Spain, Australia, and Egypt have 2 each, and South Korea, Thailand, China, and Russia each have 1.  We spend very little on what used to be called “civil defense”, acts that keep the people safe if the mainland came under attack.

Using rough numbers from Sweden,  here’s an approximation of what a major undertaking might cost.  Sweden has proposed expanding its network of shelters and building shelters that can contain 50,000 people beginning in 2019 for a total cost of 2 billion Kronner, roughly $327 million.  At this price tag we could shelter 150,000 people for every $1 billion.  This is capital spending on shelters that can last for many decades.  $10 billion could shelter 1.5 million people and $100 billion could shelter 15 million people. At this rate shelters for every person in the country could be constructed in roughly 20 years time.  These figures are if we only built new construction.  Our country has many locations that could serve as fallout shelters that are not setup or designated as fallout shelters.  These aren’t places you can ride out a nuclear winter for a decade, but they are certainly capable of keeping people alive directly following a nuclear attack.  Turning existing fortified locations into designated shelters could save several billion dollars, and speed up the process by many years.

What Can I Do To Prepare For A Nuclear Strike?

Ok, so it’s highly unlikely that the government will renew its interest in civil defense and start building shelters for its citizens, so it’s on us to prepare ourselves for such attacks. 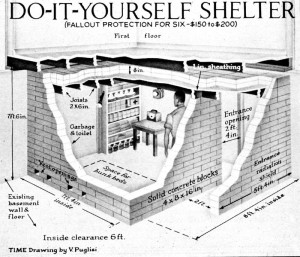 1. Build an expedient fallout shelter.  It doesn’t have to be fancy, you can build one in the corner of a basement for a couple grand.  Or if you have a lot of time on your hands you can build one outside in the ground for free. It might not be something you would want to live in for a couple weeks, but it would still beat the alternative of dying from radiation sickness.

2. Look for hardened structures everywhere you go.  Look for buildings with a double basement.  Look for old civil defense shelters.  Look for large concrete structures.   The lower stories of a parking garage are a perfect option.  Tons of concrete shielding above and to the sides. Keep a “bug out bag” packed with food, water, medical supplies, lighting, batteries, cash, and defensive weapons, and be ready to go to one of these locations if disaster strikes.

How Long To Stay In A Shelter After A Nuclear Strike:

What this means is that you want to get to your shelter extremely quickly and stay inside for the first 2 days.  After two days taking short trips out is acceptable, but you want to live in the shelter for those first two weeks at a minimum.  If the attack was localized as in there was just 1 bomb and not 1,000 hitting everywhere in the country, after 48 hours driving away from the blast radius will give you more bang for your buck than staying in a shelter, and you can be outside instead of cramped. Distance from a radiation source follows an inverse square, so the further away you are from the blast you are exponentially better off. For example, dose rates 4 miles away will be 1/16th the dose as dose rates 1 mile away.

This episode that happened in Hawaii shows us that we are woefully unprepared for a real attack.  People were lowering their children into sewers.  While I think a nuclear attack has a probability of less than 1%, there are still actions we should take to prepare for such an eventuality given how dire the consequences are.  We created an awesome power that has the ability to destroy large cities with the press of a button.  The specter of nuclear war is largely ignored by our society, a forgotten relic from the cold war, when we are actually closer to midnight on the doomsday clock than at any other point in history. It’s two minutes to midnight,  what are you doing to prepare?