You are here: Home › Investing › The Power of Dollar Cost Averaging 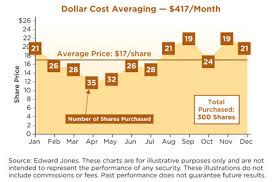 Dollar cost averaging is one of the greatest wealth building tools available. All that is required is to detach emotion from money, and invest the same dollar amount every month over a long period of time, regardless of the share price. Dollar cost averaging forces us to buy more shares when the price is low, and fewer shares when the price is high. The reason it has to be automatic is because we have no idea what “high” or “low” is. Emotionally, we see the price of a mutual fund falling and we want to sell to cut our losses. We also want to buy more when we see the price skyrocketing. This is the opposite of what we should be doing.With dollar cost averaging an investor can accumulate more share and buy at a lower average share price, than the median price of the stock over time. Dollar cost averaging works on mutual funds the same way it works on individual stocks.

Let’s take a look at the S+P 500 over the past 6 years. In October 2007 the S+P was at 1550. It had been going up for some time, and many people were jumping in to the stock market (practicing market timing and acting emotionally). At the beginning of this month, September 2013, the S+P 500 was trading at 1691, less than 10% total return over 6 years, and an annualized return of only 1.5%. This time period of course includes one of the worst stock market performances ever.

Now, since Investor A acts largely on emotion, what do you think he would have done in early 2009 when his original investment that was going up in value had lost half its value? Many investors jumped ship, and sold their shares taking a massive loss. Had he sold at this point in time he would have turned $7200 into just over $3400.

These examples occur in a vacuum, most likely for Investor B, there would be a pre-existing balance, which would lessen the overall return because the shares already accumulated would have returned only 1.5%, while his new investments would have returned 9.56%. Although this does reduce the overall return, the principle remains the same: In order to be a successful investor, you have to remove emotion from the equation and buy every month for decades.  This consistency is what will produce the results desired.

Dollar cost averaging works best when there is volatility, and the last 6 years were extremely volatile in the stock market, which in this example shows a steeper difference in return than in a “normal market”. I used this example because not only is it our most recent history, but it shows how in an overall stagnant market, good returns are possible. It drives me crazy every time a talking head on TV refers to the past decade as being “the lost decade” for investors, because the prices of major stock indexes are just recently exceeding where they were a decade ago. They argue that no positive returns were made, and that would be true for people who invest like Investor A. For those of us who will use this simple tool, even when the market isn’t booming, we can still earn decent returns. Dollar cost averaging is an extremely powerful tool to building wealth. Setting up automatic investments to buy and hold is key to this strategy.