Whirlpool Corp, which is headquartered in Benton Township Michigan built an $85 million campus in Benton Harbor city back in 2013 to serve over 1,000 employees. As part of this deal Whirlpool received a large property tax break and will start paying taxes on this building in 2023. Whirlpool has been a major player in the $500 million+ Harbor Shores project as well, which includes a massive hotel, hundreds of high dollar houses, and a Jack Nicholas Signature Golf Course. Now Whirlpool is breaking ground on a $22 million 80 unit housing complex. When running the numbers, it doesn’t make sense to me financially. 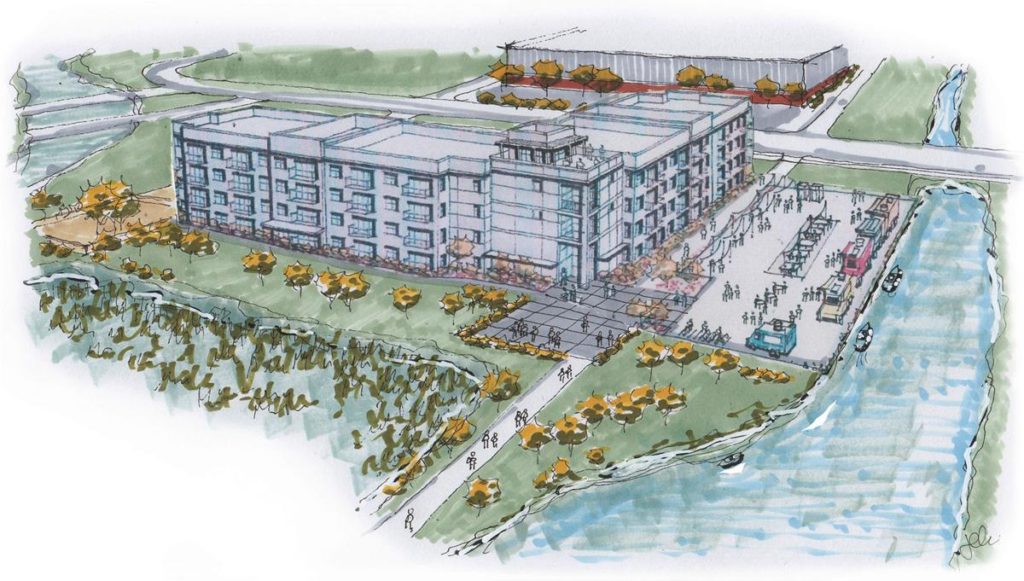 These numbers are terrible, and the rent prices are very high for the area. The housing of course could be convenient for employees of the Whirlpool Benton Harbor campus who could walk to work and theoretically have no vehicle expense.  This complex would also make it easier for Whirlpool to attract outside talent. “You don’t have to worry about finding a place, to move here, we have an apartment ready for you across the street, and we’ll cover the first three months of rent for you!”

For a corporation like Whirlpool with a market cap of 13.75 Billion, this complex is a drop in the bucket. Whirlpool doesn’t need to make money on it, and a $500,000 a year phantom loss is not a problem, since it is a tax tool and realistically this project gains 1.3% of cash, which is better than the $22 million sitting in a bank account earning .001%. In todays low yield environment this project may make sense for a large corporate entity with a lot of cash.  At the end of 2020 Whirlpool has just shy of $3 billion in cash.  This is a heavy cash balance for a company worth $13.75 Billion.  Whirlpool’s cash balance has been steadily increasing in recent years, building up from $1.13 Billion in 2016.

The blue highlighted area is where the apartment complex will be built. The 3 green areas are Whirlpool office locations, and the red is the Harbor Shores Hotel. The Jack Nicklaus Signatures Golf Course is directly to the North. Whirlpool World HQ complex is about 3 miles north of this image.

This project is also a Goodwill project to the community. It gets positive press. Paying another $690,000 in local property taxes, while also building 80 housing units in an area where all residents will have to pay 1% of their income in city taxes is a big revenue boost for the city of Benton Harbor.  Non residents who work in Benton Harbor pay a 0.5% tax.  If the total complex houses 100 adults with an average income of $80,000 and they all previously worked in Benton Harbor but didn’t live there, this would add another $40,000 in income tax to the city per year.

More Units Is A Net Good:

Benton Harbor is facing a housing shortage. The long term population decline that started in the 1960s has leveled off and the population has stabilized. In fact, Benton Harbor has become a place where many people seeking affordable living from across Southwest MI have been moving to.  Benton Harbor housing has consistently been a good value and housing prices in Benton Harbor have not increased at the rate they have throughout the rest of the county.  Meanwhile, several hundred housing units were destroyed for the Benton Harbor airport expansion, a large mobile home park was closed down, and several hundred homes destroyed over the last 15 years through blight reduction programs. This reduction in inventory coupled with the Covid-19 real estate market, has created a housing shortage in Benton Harbor. Even though this is high end expensive housing targeted to singles and professionals with no kids, it will add total supply to the market and put downward pressure on rental prices for everyone.

I personally would not want to live directly across the street from my place of work, especially if my superiors were aware that is where I lived.  I feel that there would be a heightened expectation to show up quickly or be called in on the weekend or after hours because “John lives right across the street, it will only take him a couple minutes to get here”.  Sure the overall daily commute would be desirable, and if your car broke down you wouldn’t have to worry about being late, however I think it would only be natural for work to take over more of your daily life than it ought to.

Overall I think the move makes sense for Whirlpool, even if it only is being built to further the Harbor Shores development and purchase goodwill in the community.  I think there will be plenty of Whirlpool employees who are drawn to this apartment building and overall the net addition of 80 new units will be a good thing for the community.

What do you think of this new development?