You are here: Home › Employment › Company Scrip: A Dark Chapter in American History 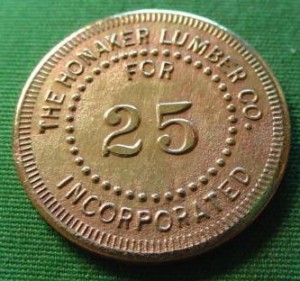 How would you like to be paid in Wal-bucks, icash or Mcdollars? I think for the most part no one would accept such terms, but for a good chunk of time in American history, this is how some workers were paid. Up until the early 1950s many workers, especially those in the mining and logging industry, were paid in a form of currency issued by their employer known as company scrip.

The Rationale for Company Scrip

Cash was rare, especially in remote mining and logging towns, the sheer logistics of providing cash to pay employees was almost unfeasible in some scenarios.  To combat this large companies established their own forms of currency, referred to as scrip.  Scrip was used in two different ways, in its purist form scrip was a form of payment, essentially the company had its own currency similar to how individual banks issued their own currency in the early days of the country.  The second form of scrip was as an advance on wages.  There were some companies that would pay cash every two weeks, or issue company scrip to a worker as an advance on pay if he requested it. Essentially company scrip in this form was the first pay day loan.

Because most of these endeavors were located in relatively remote areas, the company provided housing and stocked a store for its employees.  Most of the time there was no competition because who else is going to open a store in the middle of nowhere to accept money that is only redeemable by the company that issued it? This gave rise to the concept of company towns and the company store.  Workers were paid in scrip, which they used to pay rent for their homes and to buy their groceries and supplies.  Oftentimes the company store charged very high prices for its goods because they genuinely cost more to ship to a remote area, and also because they could, having no competition. When other stores were within convenient travel of the company store, they would often discount the rate of scrip, to as little as 25 cents on the dollar.

For the most part company scrip stopped being used in the early 1950’s due to increased economic pressure from a larger economy and more connected country. Increased legislation against the practice also played a large role. While company scrip is not used explicitly in the US anymore, we still have our share of economic systems that are designed to take advantage of workers; most notably the pay day lending institutions.  Although I am a free market economics kind of guy I do think that some consumer protections need to be in place and greater restrictions on payday lending.

What are your thoughts on company scrip or on today’s payday lenders?

3 Responses to "Company Scrip: A Dark Chapter in American History"