You are here: Home › Savvy Consumer › Backing Up Pictures

Backing up pictures is a necessity for everyone.  It used to be that the only backups of photos was a stack of negatives that more often than not got lost and scrambled together in a junk drawer.  Most of us print out only a small percentage of our pictures.  Since pictures are almost all stored exclusively in digital format we risk losing all of our pictures in the event of a computer crash.  Although this is a dismall prospect, because these files are digital they are extremely easy to backup.  Over the last few years storage capacity has become extremely inexpensive allowing for multiple options of easy to use and inexpensive digital photo backup.

In 2009 the hard drive on my computer crashed.  On this hard drive was virtually every picture of our kid who was 1 at the time.  Mrs. C. was not happy.  In a bid to recover the files we went to Best Buy and asked the Geek Squad for help.  Due to the nature of the crash the total cost to restore our files was around $400, more than what a new computer would cost.  Because of the importance of these photos we paid it, despite cash being really tight at the time.  We were really lucky they were able to recover the pictures; sometimes hard drives crash and there is no way to recover them.  We certainly didn’t want to have this situation repeat itself.  It would have been well worth it to have invested in backing up our pictures before hand.  It’s one of those things we don’t think about very often, but if it happens to you it can be devastating.

Optical Media: When we first started backing up our files we used Archival DVDs

.  For the amount of photos we had we needed a total of 5 DVDs to cover everything. I have kept up with burning a new DVD every year.  Verbatim claims its archival quality DVDs are designed for a 100 year lifespan when stored under proper conditions.   Over the last few years digital storage has become substantially cheaper and BlurRay disks, which hold about 5X as much information are a better bet if your computer has a blu-ray burner. The M-Disc Blu Rays claim to have lifespans of SEVERAL hundred years

.  A 5 pack costs around $15. Flash Memory Cards:  SD cards are a great way to store pictures.  The current capacity of SD cards is amazing.  For around $20 you can get 64GB of storage

.  This is quite a bit more expensive than optical disk storage, but it is still easily affordable.  All of the pictures our entire family has generated, including thousands of scanned images dating back to the turn of the 20th century can easily fit on a 64GB card.  Flash memory card longevity is based more off of write cycles than time.  They are rated for 100,000 write cycles, which means if you write to them once a day, they could last for 273 years. I personally have a 32MB SD card from over 10 years ago that still works just fine, although for all practical purposes is useless these days based on its small size. External Hard Drive: 1 TB external hard drives run around $50 now

Our Process For Backing Up Pictures: 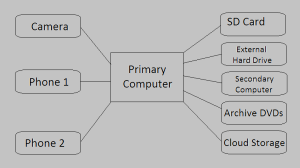 Since transferring data files is extremely easy, the best way to ensure you stick with backing up files is to keep your files organized and in one place.  We take pictures with 3 main devices; Mrs. C’s phone, My phone, and our camera.  We upload all of these files onto our laptop computer and sort them into folders based on what the images are about.  These folders are all encased in a year folder.  After each photo load onto the computer we transfer the updated yearly picture file to an SD card. At the end of the year, we take the SD card, which contains the all of the pictures from the year in a folder named ‘2016’.  We then transfer this folder to our desktop computer,  a portable hard drive, and we burn a copy onto an Archival DVD.  This gives us a total of 5 places that our pictures are held.

Backing Up Pictures On The Cloud:

and have been a member for a few years.  With Amazon Prime you get unlimited photo storage and an addition 5 GB of space to store videos or other data files.  My primary concern with using cloud storage was what would happen to my files if my Amazon Prime subscription lapsed, or I decided I no longer wanted to be a Prime Member?  I signed up for cloud storage and researched how the system works.  Amazon will give you 90 days after Prime expires to backup your files, re-sign up for prime, or subscribe to their cloud only service.  You don’t have to be a Prime member to enjoy the benefits of cloud storage. For $12/year Amazon will give non-prime members the same amount of cloud storage space as Prime members get for free.  If you have a ton of videos to backup Amazon allows unlimited storage for $60 per year. Last month I signed up for Amazon Prime Cloud Storage and uploaded all of our photos to it. I was amazed at how quickly the system allowed me to backup our pictures and other files.

Printed photos are perhaps the most likely to suffer damage.  Mrs. C’s mom had literally thousands of photos that had been stored in boxes in the basement for many years.  These family photos dated all the way back to the dawn of photography and included daguerreotype photos.  Over the course of a year, Mrs. C scanned all of these images, and added a caption to them describing who the people were and any details that were written on the photos.  This process was highly labor intensive, but was made much easier through batch scanning.  We purchased a Kodak Hero 4.2 printer for the sole reason that it would identify separate images in the scan window.  Because of this we could routinely fit around 6 pictures in the scan window at a time, which greatly sped up production. Now all of these old photos are included in all of our digital backups. After digitizing all of these photos we put them in new photo albums. The old albums that had been in a damp basement for decades were causing harm to the photos.  The vast majority of photos could be safely removed, however there were a few that were stuck in place. these we cut out the backing of the albums and stored the photos attached to the old backing in the new albums.  We then put them on a book shelf in the main part of the house.

The next step in our backup plan is to have all of our data backed up to a second location.  We will be putting all of our files on 1 SD card and having it stored at my parents house.  In a worst case scenario that our home burned down we could potentially loose everything, despite having it backed up on multiple forms of media, a copy stored elsewhere would be a smart addition. Using the Amazon Prime

Cloud Storage is a great backup method, but having your data backed up in a separate physical location is necessary to further mitigate the risk of a loss.

In addition to backing up pictures, all of these methods can be used for other files such as pdfs, spreadsheets, and of course websites like this one.   Are you backing up your pictures?

One Response to "Backing Up Pictures"