You are here: Home › Fun › Surviving Disney World In August

This year we took a family vacation to Disney World in August with our 4 kids ages 5, 7, 9, and 15 for 6 days.  My sister and her 4 year old daughter flew in from California and joined us as well.  Here’s what we did to make this trip a success.

Step 1:  Don’t Go To Disney World In August.  Newsflash, I know this may come as a shock, but Florida in August is hot.  like really hot.  It reached 98 degrees on two of the days we were there.  Add in 100% humidity.  I was coated in sweat before leaving the hotel at 8 AM.  If at all possible arrange to miss school and take the kids in February.  Florida is nice that time of year.  If August is your only option, then do the following:

Adjust your schedule before your trip.  You want to arrive at the park at least 30 minutes before the park opens every single day and go back to the hotel in the middle of the day, say 1230 – 5p.  Go back to the park in the evening. On the days we arrived early we got through 75% of the rides we wanted to do by 11 AM.  Most people are at the parks between 1030 and 6.  This is because most people don’t get their butts moving in the morning and it is a pain to leave and come back.  Don’t be like them.  Using this strategy you tend to beat the worst of the heat and the worst of the crowds. ACTUALLY REST when you go back to the hotel.  Don’t go for a walk, don’t go swimming, stay out of the heat and at least try to take a power nap. The only exception to this is the Magic Kingdom.  It is SO much more difficult to get there and come back than the other parks and it may be worth toughening it out for the duration of the day.  Take a rest at the air conditioned Hall of Presidents.

You also want to check out the Undercover Tourist Crowd Calendar to decide which days to visit which parks.  In general you want to avoid parks that have extra magic hours if you are not staying at a Disney hotel. 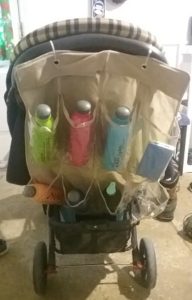 Pack all the fluids. We had 8 people total and we were running low on fluids most days.  I packed a small cooler with around 10 drinks and we also packed 1 water bottle per person.  I attached a shoe hanger

that came with a carrying hook.  This came in handy for getting through the tram and security. The lids are screw on lids, which prevented leaking.

Ask for cups of water on a tray.  All Disney restaurants will give you free cups of ice water.  Order 2 per person in your group and they will give you a tray.

Plan to do indoor rides / attractions in the hot part of the day. If you are staying past 11 then arrange to be inside during the worst heat of the day.  Every park has attractions and shows that are air conditioned.

General Tips Outside of Heat Management:

What To Bring To Disney World in August:

I lugged around a heavy backpack each day and we ended up not using a lot of what I was lugging around.  Here’s the stuff you actually need:

Stroller – Unless you have no children under 7 this is super important.  Tiny legs will get tired.  The stroller is also nice to have for putting your stuff in.  I bought a double stroller off of craigslist years ago for around $30.  This is about what it costs to rent a stroller for 1 day at Disney.

Hat – On your head, preferably white.  I also brought a bandanda with that I secured under my hat to shade the back of my neck from the sun.

Cooling Towels – Back of stroller, store with water bottle. I thought these were gimmicky, but they are well worth it.

Quarters and pennies – Back of stroller in medicine bottles, you have 8 slots.

Sunscreen – Back of stroller.

Cooler – Under stroller:  We used a medium sized soft sided cooler that fit under the stroller.

Snacks. – Plastic bag next to cooler under stroller. Kool-aid flavor packs were very popular and we mixed them with water throughout the day.

That’s it.  I brought ponchos each day, but we never needed them.

This was our 2nd family vacation to Florida, we went to Universal Studios in 2016.  We are tentatively planning to do another Florida trip in the summer of 2021, but we have not ironed out the details of if we are going back to Universal, to Disney, or both.

Have you taken a family vacation to Florida?  What tips do you have for surviving a summer trip?