You are here: Home › Home Ownership › Pitfalls of Being a Passive Landlord

I wrote before about what I have learned by being an accidental landlord.  Since that post I continued to rent the property to the same person as a relatively passive landlord.  His lease expired at the end of November and we gave him an extra month for free to move his stuff out and to fix the minor damages that were caused while he was a tenant.  During this process we learned some things that would have been nice to know all along.  Had we been more involved we could have gotten rid of this tenant much sooner, or better yet, never rented to him in the first place. Think being a landlord begins and ends with collecting a check?  Think again.

During the two and a half years we rented out the house we only visited the home twice.  The first time was to replace a fridge (that he waited several months to inform us had stopped working… and the second time was for the township inspection, mostly making sure there were smoke detectors and GFCIs.  When I replaced the fridge I noticed that the two front rooms of the house were blocked off. When I inquired about this, he said it was to save money on heating those rooms, which he didn’t need.  We found out later that those two rooms were filled with stuff.

In November our tenant explained to Mrs. C. that there were a few damages. The back door that was kicked in by a guest had still not been repaired properly. We had noticed this on our first visit to the house and saw how he had rigged up a fix and explained that he was responsible for fixing it correctly.  The upstairs shower had a “small” leak (that we were not informed of until now) and there were two spots of damage to the drywall.  Our lease stated that he would be responsible to fix any damages that occurred while he was there, and any maintenance issues (such as a leaky pipe) would need to be referred to us immediately.

In December Mrs. C.  called him to see when he would be dropping off the keys, and he told her he would need every day in December to move his stuff out and he would bring them on December 31st.  On December 31st, he called and said he would not be finished moving out because he had someone helping him who dipped out, but he would have everything out by the next morning.  At 3PM the next day Mrs. C and I went over there and this is what we found: 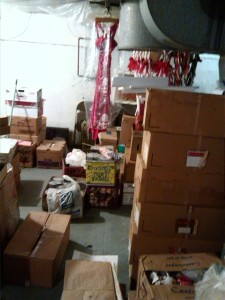 This is actually after we moved hundreds of boxes out…

We had been renting to a hoarder. We assisted him with moving his stuff until 9 PM and planned to go back the next day.  We moved about 75% of what was left out.  I don’t even own as much stuff as what he had left when we got there. He stated that he had been actively moving his things for two months.  The front yard and backyard were completely tore up from him driving the u-haul into the grass repeatedly. The vast majority of items had goodwill stickers on them. I’m all for bargain shopping, but I think this guy has a problem.

The next day we got a call around noon telling us he had moved everything, but… the fridge we had that had stopped working that he had asked if he could have, he could not get out of there.  He cut the water line to it and water sprayed everywhere (shocking right?) He shut off the water and was trying to get the parts to fix it.  We told him not to worry about it and we would take care of it.

Here is a montage of the “two damaged drywall locations” I count 6. 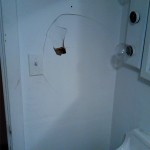 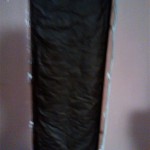 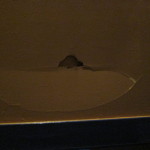 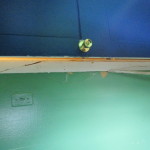 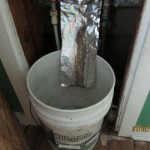 The “small leak” was actually a large leak. When the water was on, the shower leaked at a rate of about a gallon every 5 minutes.  He rigged up the plumbing to replace the old set up, once again without telling us.  I have now replaced it correctly, but still have to replace the shower wall that he cut up, at least he put a bucket under it… 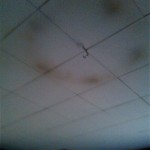 And then there is the spot where he rigged a chandelier lamp up to the ceiling, looks like the bulbs were too close to the ceiling!

In the basement, he cut a hole in our ductwork and hooked up a dryer vent line to it to heat a small room in the basement…and ripped the carpet out of an upstairs room and put it in the basement room.

The house had a gutter system on it that diverted water from the 2nd story roof to the ground. At some point the downspouts either blew off in strong winds or were removed.  The gutters were running all the water from the upper roof to one spot in the lower roof. Would you believe the ceiling had damage right at this location?  Once again we were not informed of this.

Although our lease clearly stated no smoking, they smoked in the house.  In one bathroom the stains on the walls are quite visible.

As I mentioned in the previous article he had been renting out rooms to other people for a short period of time (which was not discussed with us, or allowed in the lease). Even when the extra renters had to go, his “daughter” was still there and causing drama.  One night her boyfriend got mad at her for ignoring him and drove his car into my garage door.

For the last year he was a tenant he routinely paid rent late, usually around 10 to 14 days late. There was one month where the rent didn’t come until the next payment was due.

He originally wanted to buy the house and was going to make a very large down payment with an inheritance he was due…Then the story changed to a friend was getting an inheritance and would be giving him the money.  Then the friend’s inheritance was tied up in probate. Then it was tied up again.  Then his nephew was going to give him a bunch of money for a down payment…. There was a lot of wishful thinking and outright deceit on his part, and of course a decent amount of naivete on my part.

All in all this chapter is over and through the two and a half years we didn’t make any money on cash flow, we did pay down about $5,000 on principal, which was quite helpful. And for the record, Mrs. C. was quite a bit less passive than I was, she handled all of the phone calls and drama from our renter, I know I would not have had the patience for it.  Going forward if we invest in real estate, I think REITs are the way to go!

All of this could have been prevented if we had taken ANY of the following actions:

1. Proper Tenant Screening: We allowed our Realtor to handle this while we were trying to sell the house. Had we ever met this guy I would have never handed him the keys to my house.  Had we verified his income and/or credit and rental history we would have also seen some red flags. We originally were in a deal with him for him to buy the house through a land contract.  BTW if a deal sounds too good to be true, it most likely is.

2. Exercised Inspections: Our lease, like most leases, stipulated the landlord could inspect the property with 24 hour notices.  Even if we had done this quarterly, we could have stopped some of these issues early on.

3. Ask neighbors if they have any concerns: We recently found out one of our neighbors had spoken to the renter about several concerns.  Had we talked to her we would have had a better idea about what was going on at the house at a much earlier date.

4. Don’t Hesitate to Evict: There were warning signs and blatant violations of the lease.  We should have started the eviction process when we found out he had rented out rooms to several people.  We didn’t want to deal with the headache and didn’t want to loose the rental income at the time.

Have you ever tried to be a passive landlord? What have you learned from the process?

5 Responses to "Pitfalls of Being a Passive Landlord"

Leave a Reply to Even Steven Cancel reply