You are here: Home › Education › Financial Lessons From My Dad 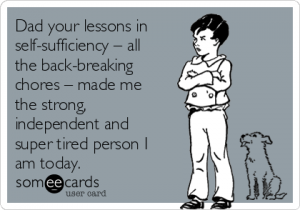 Perception is an amazing thing, as time goes on you see things differently than when you were a kid.  It’s funny, I have seen myself transition from being Calvin to being Calvin’s dad, and it feels like it happened rather gradually.   One of my favorite concepts that I have heard repeatedly on the Dave Ramsey

Show is that ‘more is caught than taught’.  It isn’t the lectures that teach the most, its the actions kids observe you doing repeatedly over time that teach. There are several financial lessons I learned from my dad.

Work Ethic: If there is anything I remember being reprimanded for as a kid it was being lazy.  I remember one time when my dad was listing off chores he expected me to complete during the summer and I complained that it was sooooo much work.  My  dad in an irritated tone told me that I was 15, I should be able to do a lot of work! For most of my childhood my dad worked long hours (as did my mom).  Weekends were a time for projects, and it seemed like they often took longer than expected.  I think it took a couple years to paint our first house.

DIY: I hear some of my friends talk about hiring out jobs on their houses and it boggles my mind.  It drives me crazy to even think about hiring someone to take out a tree, build a fence, run some wires, or tar the roof.  I can’t recall ever seeing a contractor in our house when I was a kid, my dad always fixed things himself on the weekends.  In my 8 years of home ownership I think I have only had 2 things dealt with by professionals; boiler installation and the installation of a hot water heater, both very reluctantly.

When I was a kid I was often a “helper”, although I found myself holding the flashlight more often than having my hands on the work.  I didn’t take the job too seriously and was probably not the world’s best flashlight holder, but now I realize how important that job is.  Through osmosis I have remembered enough of the lessons to get by on many home repairs. From time to time I still call up my dad to ask how to handle a specific problem. When I was a kid I thought for sure my dad knew what he was doing inside and out on all of these projects.  As an adult, I’m sure he was making it up as he went a few times, I know I am. I wonder if my kids think I know for sure what I am doing on all of my projects.

I still shovel the driveway by hand…my friends and coworkers think it’s crazy…see, it does build character!

Houses Vs. level of income: 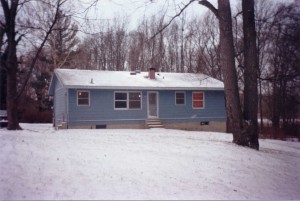 This is one of scenarios where your perception changes with time.  When I was 6 years old I had no idea what my parents incomes were or how much a house cost, or what debt was, I was just a typical kid.  We moved out of our trailer park into a house with, what to me was a giant yard (I think it was a bit over a half acre).  We always had projects to work on (see above).  I don’t know for sure what my parents made back then, but I know that Mrs C. and I bought a house together when we were making minimum wage that was around the same price point. My parents I’m sure were making well above minimum wage, but they still bought much less house than the bank would allow them to.

There have been times in the last 10 years where I wanted to jump on a house and go into TONS of debt to do so.  I remember even pitching an idea to my parents to help me finance the down payment on a house so a bank would give me the loan for a house I couldn’t afford.  I am so glad they didn’t, we waited until we could afford it. When we bought the house we are in now, it was still substantially below what a bank was willing to lend us. I am so happy that we didn’t get a house at the higher end of the debt to income ratio, I think I would have trouble sleeping at night. 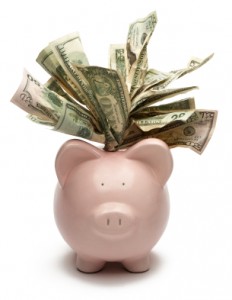 One of the taught moments was a conversation about retirement savings.  This was maybe 5 years ago.  My dad mentioned that “the experts” often say things like savings $1 at age 20 is the same as saving $5 at age 40; the thing is he said, that it is MUCH easier to save the $5 at 40 than it was to save $1 at 20. Of course YMMV.

My mom and dad were both young parents and worked their way through college while having kids.  I ended up doing the same thing, which makes saving for retirement harder to prioritize when you’re trying to make ends meet while raising kids, pay off debt, and save for a house down payment.

I still feel like I am behind the 8 ball with my retirement savings, but we are getting there. My parents prioritized retirement savings starting in their mid twenties and had a higher than average savings rate, which certainly rubbed off on me down the road.

Over the course of my childhood I witnessed my parents move up in wealth and “economic class”.  I think a lot of people who have children later in life, after they have established themselves in their careers and life deny their kids this experience.  Kids grow up thinking that the lifestyle their parents have is normal, and expect to live the same lifestyle when they get out of school.  I saw what life was like for a young couple with two young kids when I was little, and my expectations on the real world were more closely aligned with that model of living than with where they were at Age 45.

I was the second kid, so I wasn’t present for the deepest part of the struggle, but I know the story.  We had a neighbor in our trailer park who told my dad that he was “lucky” he had a college degree, like they just give them away at the lottery.  He had to work hard for 4 years to earn it. Him and my mom both worked crappy jobs and went to school, and raised a kid, living in cramped apartments, took on debt, etc.  They moved up economically over the years through hard work and determination.  I learned that I can do that too.

Both my mom and dad worked hard, spent tons of hours at work, planned, had a high savings rate, and got ahead. Of course they had bumps along the way.  That’s the whole point.  If you take control of yourself, you can change your economic status. A couple years ago my Dad had had enough of the job he worked for about 20 years, and he ended up quitting and taking a job that paid considerably less, but was less stressful. It was a major decision, but one that him and my mom were able to make because they had lived well below their means for many years.   “It’s not what you make, it’s what you keep that matters.”

About a month ago at my nephew’s birthday party that we had at my house a little girl asked me if we were rich. I told her no, but then I started thinking that we are doing better off than a lot of people, and how her perception was based on her current experience; I can see how through her eyes we were rich.  We appear to be rich to her because we have a big yard and a lot of cool outside toys.  We saved for 5 years while living below our means to buy the house, and virtually all of the cool outside toys were either bought used or made myself.   I don’t feel rich, but we are at least fully “middle class” which was not the case 5 years ago, and certainly wasn’t the case 9 years ago.  10 years from now I may consider myself rich or at least as part of the “mass affluent“. I probably won’t consider myself to be truly wealthy for another 20 years.

Wanting to be a Millionaire: 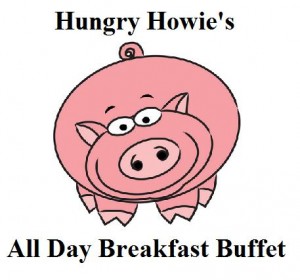 On long car rides I remember talking about how I wanted to be a millionaire and what I would do with the money.  My dad said I should focus on how I would get the money instead of how I would spend it, because it is much easier to spend $1 million than it is to make it.  I’m sure this has influenced my detailed planning.

My first idea (mind you I was a kid at the time) to become a millionaire was to open a restaurant that served a breakfast buffet all day.  I think this stemmed from one too many mornings of going to McDonald’s and they had stopped serving breakfast too early. Unacceptable. This is America! We should have 24/7 pancakes! As a young adult I spent 3 years working at KFC and I have no desire to be in the food business, although I still like the concept.  I will get to a million at some point, but I am much less keen on spending a million then I was back then.

Learning from his mistakes (or not):

The two main times my family moved when I was a kid, my parents hadn’t sold the previous house, and they ended up carrying two houses for over a year.  Painful. I remember the stress this caused and I planned to never do the same thing. Even when we found the perfect house we were totally going to wait until we sold our existing house.  But then it didn’t sell, and the price dropped on the house we wanted.  We decided to go for it  and thought our home would sell soon. It didn’t. We had two transactions drag on for months, then fall through at the last minute.  It’s now almost three years later and we are renting it out, but we went over a year with it vacant and that was costly, especially after just putting down 20% on this house.

I have learned a lot from my dad over the years about life and money, and as time goes on the more I realize I don’t know.  If I could only know as much as I thought I did when I was 18 I’d have it made!  I owe a lot to both of my parents for instilling the values and lessons in me that have allowed me to be successful in my life thus far.  If they weren’t as goal oriented or fiscally disciplined as they were I would not have the innate nature to do the same.  I hope that I can influence my children and nephews to the same degree.

What are some of the important financial lessons or life lessons your dad has taught you?

3 Responses to "Financial Lessons From My Dad"