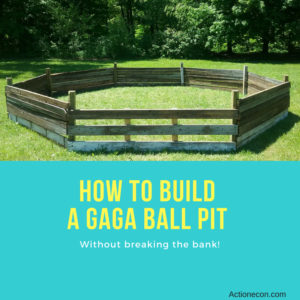 I had no idea what Gaga Ball was until my kids joined scouts.  My oldest kid is in Boy Scouts and my younger son and nephews are in Cub Scouts Pack 655 in Benton Harbor, and after camp I started hearing them talk about this Gaga Ball game. I didn’t fully understand it until I went on my first camp out with them and saw several examples of Gaga Ball pits and watched the game in action. I decided that it would be fun to build a Gaga Ball pit for the kids, since we have plenty of room in our yard for one. I built a Gaga Ball pit for under $50 in 2 afternoons with the help of a couple kids.  This adds to our existing tree fort, monkey bars, and rock climbing wall projects in our backyard playground.

What is Gaga Ball? 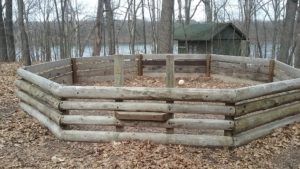 Gaga Ball is basically a game of controlled dodgeball.  The game takes place in a walled off area and the players slap the ball at each other with the goal of hitting the other players below the waist.  Such a hit renders that player out and the last man standing wins. Players can not hit the ball twice in a row, unless the ball hits someone or the wall in between.  Players can hit the ball against the wall up to 3 times in a row.   You need at least 2 people to play, however this is a game where the more people you have the better.  I’ve seen upwards of a dozen kids playing at once.  This is a game that is easy for adults to play as well as kids. The kids have a blast and get TONS of exercise from it, which means they run out some of that explosive energy they have. While at camp we played a ton of Gaga Ball and most of the kids say that it is the highlight of their camping experience. 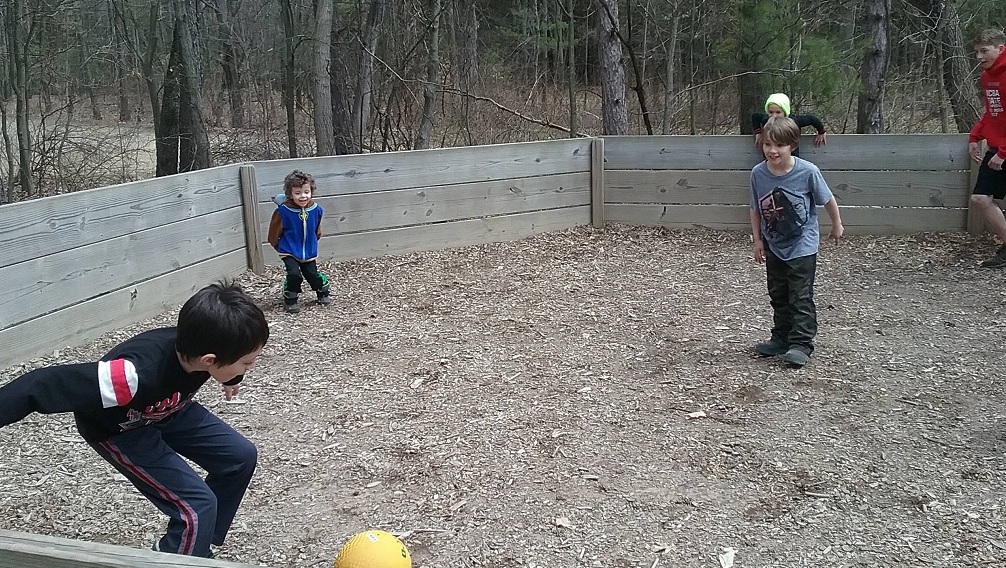 How To Build A Gaga Ball Pit; Design Stage:

I looked at multiple designs for my Gaga ball pit and I am glad I did. There are no official regulations to the size and shape of a Gaga Ball pit.  Generally speaking they are built in either pentagons or octagons and they have a wall height of somewhere between 20 inches and 48 inches.  I originally was going to cement my corner posts into the ground for stability, but Mrs. C. assured me that that was not necessary.  After completing my build I agree that it would not be necessary, the connections of the wall sections provide enough strength for this purpose. Not needing concrete saved quite a bit of time and money.

Here are the supplies needed to build a Gaga Ball pit and the cost at Lowes.  Below there is a chart detailing how many are needed for each size of Gaga Ball pit.

4X4 Pressure treated posts: I chose to use pressure treated wood for any new wood purchased because it will last a lot longer in the elements.  Buying 10 foot posts allows you to make 3 3 foot posts or 5 2 foot posts.  To save more money you could use landscaping timbers instead of 4X4 posts, which will probably have a slightly shorter life, but are significantly cheaper.  I paid $15 for each 4X4X10 post and I could have paid just $3.33 for 8 foot long landscaping timbers.

Exterior Wood Screws: I see a lot of Gaga Ball pits held together with bolts rather than screws, so far I haven’t had a problem, but bolted ones do feel more substantial.  If you go this route the cost increases a little bit. A 1 pound box of 3″ exterior wood screws

I wish I had my Lowes Business credit card when I built this because it has no fee and gives a 5% discount at the register.  Anyone can set one up here for their business account.  Mrs. C. and I recently started a rental property business and this card is indispensable.

How To Build A Gaga Ball Pit For Under $300; A Scout is Thrifty:

One of the main attributes of a Scout is that a Scout is thrifty.  To me it would be against this attribute to buy everything new and use the “best” material to build a Gaga Ball Pit.  I also don’t need to make mine as robust as the ones at camp since the one in my backyard will receive far less use and abuse and doesn’t need to last as many years, I think some of the Gaga Ball pits at camp were built decades ago.

My Gaga Ball pit is an 8′ Octagon, providing over 300 square feet of play area.  I built it for a total cost of $42.  I did this by using mostly reclaimed wood.  The only lumber I had to buy is 2 4X4 posts.  The rest of the cost was 2 boxes of screws. I don’t care that it isn’t pretty; it is functional.  If you want it to look really pretty the best option is to buy a pre-made set or an inflatable Gaga Ball pit

. These sets have really nice looking brackets and all you have to do is buy the wood and pop it in, and these are relatively portable to due to ease of assembly/disassembly, the only problem is price with the brackets (no wood included) starting at around $300.

Before building my Gaga Ball pit I did a search on craigslist and on Facebook yard sale sites and found a posting for a bunch of free wood from a barn that had been sitting out for a year.  I offered to take it.  When I got to the house the pile was much larger than what it looked like in the photo.  Most of it was 14′ to 16′ pieces.  I cut everything to 8′ lengths on site and loaded up the van, I actually had to make 2 trips.  About 10% of the wood was beyond recovery, but the rest was good enough for an outside toy structure that doesn’t need to be structurally stable.

Preparing To Build A Gaga Ball Pit: Drawing Out An Octagon:

Who would have thought making an Octagon would be so hard, and require math *sigh*.  I don’t want to admit how much time I spent learning the math, making a drawing, and laying out the Octagon, but it was the better part of an afternoon. Although tedious this was absolutely necessary to building a Gaga Ball pit in the right shape. To save you time on building a Gagaball pit I will detail the math involved in making an Octagon below. 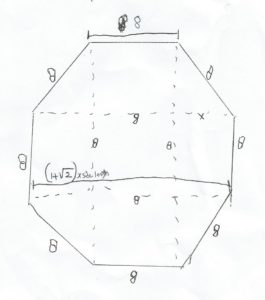 For an Octagon the distance across it is (1+√2) X side length.

Subtract 8 for the square in the middle, and you have 11.31 feet to distribute on either side. 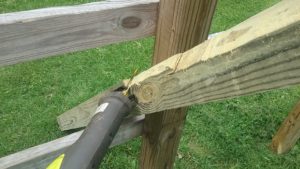 Step 2: Precut your boards and posts:  The posts come as a square and you need to cut one of the angles off if making an octagon.  Essentially every post has half the angle a square would have.  I did this with my sawzall, but I’m sure there is a cleaner way to do it. I also cut the posts to 36″.  Since I didn’t buy my boards from the store they didn’t start out as exactly 8 feet long.  I had rough cut them when I got them and now I needed to cut them to exactly 8′. This by no means needs to be perfect, but the closer the better.  Without doing this step the horizontal boards would hit the posts on a corner.

Step 3: Lay out some boards and set up stringers:

I found this idea on a website that talked about building an Octagon deck, same concept right?  You take some scrap wood and build a small frame that you can attach a string to and move it left and right on.  You build 2 on each of the four main sides of the Octagon.  This grid will make a square in the middle.  You can measure the string of the square and then move the stringers to the left of right as needed.  Once the square in the middle is square, you can measure out from each corner of the square to determine where your posts go.  From the math above on an 8′ Octagon, the posts should go 5 foot 7 7/8″ from the corners.  Once I had the stringers properly in place I put a stake in temporarily to mark my post locations. 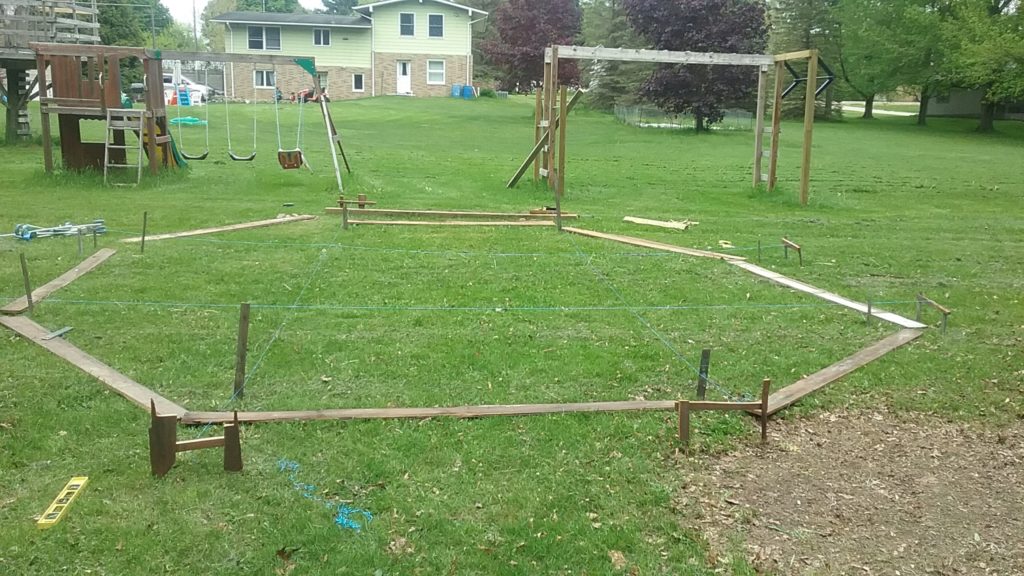 Note: Building Is forgiving.  This is for a kids toy that doesn’t need to be structural.  All it needs to do is not rot away and allow a ball to bounce off of it. Being off by a half inch here or there isn’t the end of the world.

How To Build A Gaga Ball Pit: 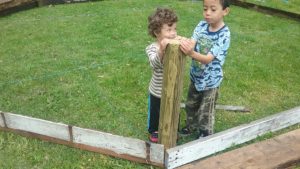 Step 1: Installing the posts and the first set of boards:

I put all my posts out to where I had marked them with stakes before.  I then had the two younger kids hold the posts up while I drilled the first set of boards in.  I kept them involved for the second set of boards as well as I had a bit of play in the posts still and wanted to get them as level as possible.  I attached each board with 2 screws on each side.  I also put a 1″ spacer in between the ground and the first board. This allows me to weed wack underneath the board and will keep the boards from rotting, since ground contact is bad. In retrospect I should have made this gap closer to 2 inches. 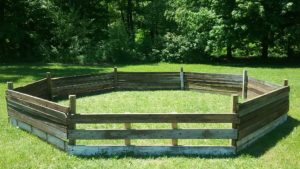 Step 3: Install the remaining boards:  I put a small space in between each board,  I’ve seen Gaga Ball pits that have no spacing and some that have 6″ spacing.  As long as a ball can bounce off the wall it will be fine.  I wanted to leave a bit of spacing for expansion / contraction and to make it easier to swap out damaged boards in the future. Leaving this type of spacing on all of the sides is a great way to save money on this project and can cut roughly 50% off the cost of the 2X6 boards.

Step 4: Sanding / Painting: It’s a good idea to do some rough sanding even on new boards.  We played a few rounds of Gaga Ball once I had the structure built and it didn’t take long for kids to start getting splinters.   I followed up with some deep sanding on all the top boards and will be painting the entire thing here shortly. To mitigate this I also made sure to tell all the boys not to lean up against the sides or run their hands along the boards.

Step 5: PLAY BALL:  You can really use any type of ball, but the best are the classic 4 square gym balls.  You can actually buy a 2 pack of these with Gaga Ball

printing at Amazon for under $11. Remember this game is fun for kids and adults, don’t be afraid to hop in there with the kiddos! I even got my parents to join in the fun.  Building a Gaga Ball pit in your backyard is a great way to increase the activity level of the whole family, and have a blast while they are doing it.

What do you think about Gaga Ball?  Anyone going to build a Gaga Ball pit in their backyard this summer?